An extra-terrestrial species has invaded the globe, conquering every last refuge and defeating the governments of powerful nations. In the aftermath, a resistance force is born, created to repel the space invaders and take back the planet. Earthfall follows four survivors in search of this faction. Billed as “Left 4 Dead but with aliens”, the game is set over a chaotic narrative combating this threat, where players will fight through extra-terrestrial hordes as they complete a variety of objectives.

Co-operative games can be filled by a team of up to four players who can drop-in or out as they please, with AI teammates filling empty slots. Both of the game’s main campaigns have five levels each, with a level usually taking roughly 15 to 20 minutes to complete, and with goals varying from fixing up a vehicle to destroying an alien nest. The variety in objectives allows the game to never feel repetitive on the first playthrough. 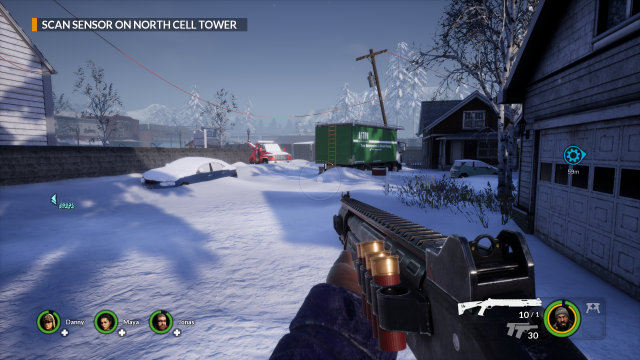 When it comes to replay value, the amount of variety falls apart quicker than one might expect from a co-operative game of this type. In the past, these games would often depend on a dynamic system to randomise variables such as enemy spawns, item placements and level layouts. I played through every mission at least half a dozen times, and if Earthfall does indeed use this kind of system, I don’t recall any of my further games being radically different besides the boss placements. Eventually, the game no longer surprised me as it had done in the beginning, and the amusement of the experience had started to dwindle.

Although the similarities to Left 4 Dead can be striking, HoloSpark is adamant that the game strives to be more than just a distant cousin of that series. Speaking to Gamereactor earlier this year, Community Manager Collin Moore addressed the comparisons: "we're huge Left 4 Dead fans. We wanted to bring that co-op gameplay back, especially with rifles and guns and things like that, and so this was a genre we thought was underserved and it was a game genre that we all love and enjoy, and all of us also have a long history of working on first-person shooters. Our team is comprised of people who've done FEAR, Condemned and Destiny, so these are games that we love and we just wanted to bring that genre back into its place." 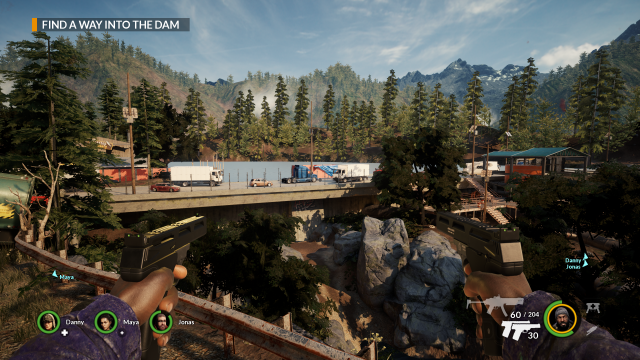 Unlike Left 4 Dead, which unfolds the narrative through survivor interaction and environmental prompts, most of the lore in Earthfall is revealed through database entries that can be unlocked as you play. This wastes a lot of the potential for worldbuilding as the character dialogue tends to be for more practical gameplay reasons (like announcing a nearby enemy or finding a supply of weapons) or for announcing what the next objective is. This would be more bearable if the characters weren’t one-dimensional shells to begin with, but there’s nothing vaguely unique or interesting about them. Altogether, it feels like HoloSpark had the opportunity to create a truly remarkable world but the writing never once feels like it can produce that.

Visually, the game is about what you’d expect from a game built in Unreal Engine 4. The primitive, otherworldly design of the aliens contrasted against the modern look of suburban America makes for a fantastic contrast - with modern areas seemingly damaged by messy hives and primordial organic structures. The extremity of these appearances becomes more obvious as the narrative progresses and the survivors journey deeper into extra-terrestrial-controlled areas. It’s also worth noting the appearance of the aliens themselves – a species made up of both intelligent and instinctive creatures, bearing an aesthetic close to Swiss artist H. R. Giger’s designs for Alien (1979) as well as taking inspiration from the enemies featured in the XCOM games. 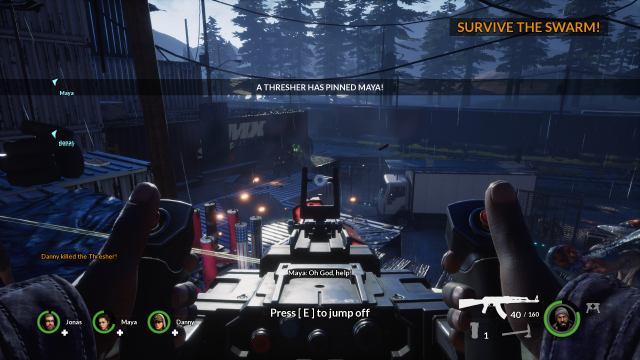 For an experience geared around shooting, Earthfall feels lacking in the action department. There aren’t any trade-offs to using different weapons, there’s no noticeable recoil and they mostly feel the same. You can print new firearms by using 3D printer machines that are littered throughout the game at key points, a fresh take on weapon systems in shooter games. Because there is no currency or points-system required to use these machines, there is no downside to chewing through all of your ammo at once. It feels like wasted potential of an otherwise interesting feature.

As far as the online goes, my experience was slow and tedious. It took me about an hour of jumping in and out of different servers before I found one that wasn’t lagging. Frequent dropped connections and rude teammates were also common, and I wouldn’t even be able to use certain items or perform specific actions due to the poor netcode. In singleplayer, things felt a lot smoother. The game ran at a stable framerate and I could finish the game from start to finish. It is obvious this was not the intended experience designed by HoloSpark, as teammate AI is lacking; with them not behaving as intelligently as a human player would while also frequently getting stuck in the level geometry. I tried to have at least half-a-dozen playthroughs under my belt to really get to grips with how this game is meant to be played, but I think by the fourth or fifth session I gave up due to the frustration of both big and small bugs.

Despite providing the foundations of an interesting multiplayer experience, Earthfall massively holds back on its delivery as a Left 4 Dead successor. It instead sits on a shelf amongst other co-operative horde shooters, unable to stand out as anything spectacular or bring anything new to the table.

Earthfall Free to Play This Weekend

Earthfall Invasion Update Will Be Adding a Horde Mode and More