Emily is Away Too Review

Sequels to games I really like usually struggle in my eyes: I like small, enclosed games that have endings and don’t try and explain away the small mysteries that make the worlds seem much larger than they are. Portal is a perfect game ruined only by the existence of Portal 2, for example. Emily is Away, the AIM simulator spanning five years of a young person’s life as the chat with the titular Emily, absorbed me for two hours as I worked my way through its five chapters to get every ending. Now, with its sequel Emily is Away Too, I find that I don’t want to play any more.

The sequel takes the gameplay of the original and applies it to a new story with new characters. The five chapters are back, but this time everything takes place over senior year of high school. This condensed story works a lot better, since I always found it a little strange that the two characters from the previous game only seemed to talk once a year despite being best friends. Also changed from the first game is the addition of a third character, Evelyn, and some of the story choices revolve entirely around picking who to talk to.

Some of the old tricks from Emily is Away are joked about in Too, my personal favourite being something we’ve all done: writing out a message, and then deleting it and replacing it with something completely different. In the first game - and this is a pretty heavy spoiler for a free game you should definitely already have played - you lose all freedom of choice and no matter what you choose, you’ll type some of it out, then delete it and write the same answer. In the sequel, one of the two girls will pick you up on that in a lovely throwback to what was legitimately one of the most heartbreaking scenes I’ve played. 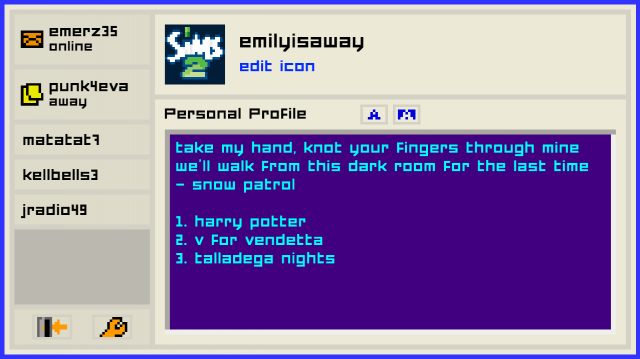 Emily Too is packed full of references to 2006/2007, with a great range of AIM icons and song references. Kyle Seeley, the game’s creator, even made a webpage so Emily and Evelyn can link you to YouToob videos or FaceNook profiles, heavily based on what the internet looked like in 2006. They will also send you files, from chat logs to art projects and poetry that will “download” to your desktop. This is where there was one slight technical problem that I experienced, as every time I opened a link my antivirus detected the game as a suspicious program. On a couple of occasions, this closed the game though the auto saving happens often enough that I never lost much progress.

The writing is much improved too, and it is clear that Kyle has learnt a lot in the year and a half since he released Emily. This is partly why I don’t want to play any more; I played through to every “ending” and tried to see every line of dialogue in the first, but in the sequel I found that I got the perfect ending and I don’t need or want to see any alternatives. My headcannon will always be one of the three endings I saw, along with roughly 18% of the other reviewers playing early. I know this because at the end of a playthrough, before the credits the game tells you the main choices you made and how many other people saw the same ending as you.

Emily is Away Too (Reviewed on Windows)

A wonderfully crafted narrative experience with a huge attention to detail, I can't recommend this enough.

Emily is Away Too