Ender Lilies Quietus of the Knights left me with very mixed feelings. From first-time development studio Live Wire, the game is shockingly well crafted and polished. Boasting a killer soundtrack, hauntingly unique art style, and well-tuned Metroidvania gameplay. Yet despite my love and passion for the sub-genre it occupies, I was left feeling more apathetic than excited by the end of it. At times Ender Lilies wowed and stunned me while at others it felt as if the game was going through the motions. It does all of the Metroidvania things a Metroidvania should do with its double jump, grappling hook, dash mechanic, and plenty of stat upgrades. But when all the criteria is met Ender Lilies feels shockingly hollow and as if it is unsure where it stands. Making it a game with a lot of excellent crafted parts that comes together to form something rather tepid and at times monotonous.

Ender Lilies sees the player take control of a young girl named Lily. Who through the means of special powers is the last hope for the world of land’s end. A disease spreading rainfall has enraptured the land turning its denizens into creatures called the blighted. The premise for the story is not groundbreaking in the slightest but it finds its own unique voice in its focus. With an intensive focus on the small, vulnerable, and tragic stories of the blighted, the game manages to feel emotional despite its grandiose saving the world nature. And while the narrative did not blow me away it did make me feel and it did engross me in the micro tragedies of its world. Creating a narrative that may not be new but is certainly emotionally resonant. 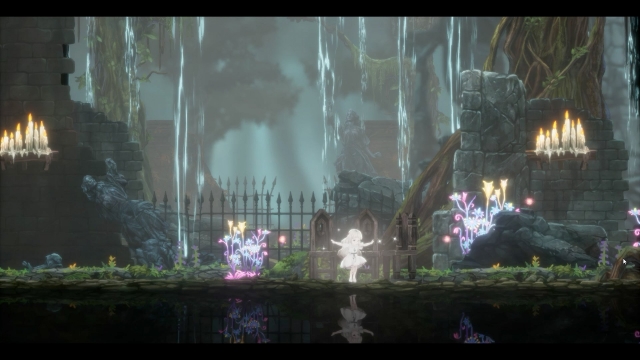 As I said earlier the game's art style is one of its main draws and it does not disappoint. While its actual gameplay systems may contribute very little to the overall feel of the game, it’s because it doesn’t have to. As with most 2D games, the art style sets the atmosphere and Ender Lilies is beautifully melancholic. Its focus on decay, destruction, and pain create a game that at times feels claustrophobically hopeless. Each new level brings some ungodly horror or upsetting tragedy. But its environments also offer moments of subtle beauty through incredibly well-rendered waterfalls, beautiful libraries, and even something as simple as an open field doused in rain. Ender Lilies manages to disarm its shock and horror with simple calming beauty.

The art style is so captivating that it bleeds over into the game’s exploration quite seamlessly. While the game does certainly offer the classic Metroidvania upgrades for exploring each and every secret door, it was not what compelled me forward. I meticulously combed my way through each corner of the world simply to see what it looked like. Would my exploration reward me with serenity or horror? This question pushed me through some of the game's most mediocre and repetitive segments. Exploration also sees some of the game's best story bits played out. Abandoned rooms, beautiful caves, and mass graves all become the settings for some of the game's most tragic and beautiful story moments. 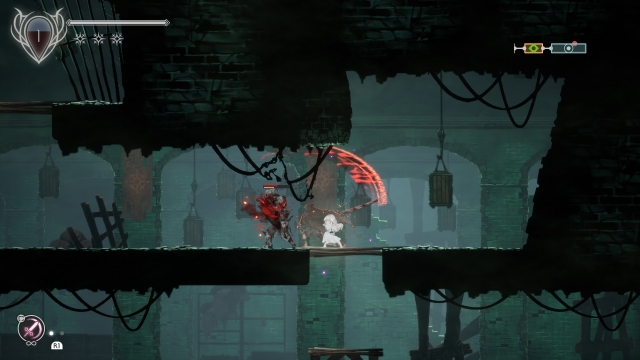 Ender Lilies also has one of the most stunning soundtracks I have ever heard. It is hauntingly melancholic yet also invigorating. It never filled me with a sense of despair but rather a reason to push forward. When combined with the game's aforementioned story and art style, the game has an atmosphere so tangible you can almost touch it. While several of the levels' unique and distinguishing elements blended together in my mind by the end screen, the soundtrack for each zone stayed distinctly placed in my mind.

Combat in Ender Lilies is fairly unique. Lily doesn’t actually fight anyone, rather the saved spirits of the enemies we’ve defeated do the fighting for us. This allows the game to have multiple styles of combat in a genre known for having limiting and simplistic combat. And while the combat is not as tightly crafted as the other aspects of the game it is still refreshing to have options. Even if those options end up feeling rather repetitive by the end of the game. 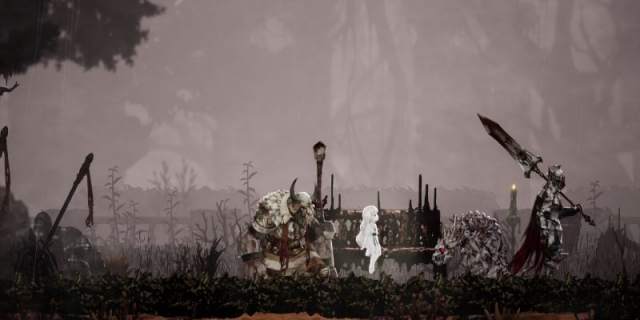 Where Ender Lilies fails is in its vision for a holistic game. All of these excellently crafted parts wow and amaze until they don’t. Exploration feels exciting and unique until the level design makes it feel repetitive and uninspired. The soundtrack, at moments, carries, the entire emotional weight of a section until it collapses on itself and becomes white noise. Combat feels engaging and competent but suddenly it falls flat due to a poorly animated enemy. This is the experience of Ender Lilies from beginning to end. Moments and occasionally most of a level flow perfectly as each part compliments the other. But when the parts don’t sync up the game sinks becoming something horrifically mundane at best.

This is the upsetting and annoying reality of Ender Lilies, a game in constant conflict with itself. And to play the game as a fan of the Metroidvanias is to be conflicted. I wanted to share in the overwhelming praise many others have heaped onto the game but I left the game feeling completely whiplashed. Moments that are truly impressive and fun to play become undercut by the thought that five minutes from now this game may be a complete chore. And that’s really truly a shame. For developer Live wire the game is still an impressive feat with its polish and excellent ideas. However, the freshness of the studio shows where it counts most, leaving me disappointed but excited for what the studio does next.

ENDER LILIES: Quietus of the Knights (Reviewed on Windows)

Ender Lilies features some truly captivating pieces. With its excellent soundtrack and captivating art style. However, the game falls flat in its execution. Making it a game that at times feels excellent and at others feels mundane.