It’s that time again! Artifex Mundi has released yet another title that features puzzles and hidden object scenes. While these games are usually rather basic they do hold a certain charm (and easy completion) that keeps players like me coming back each time a new one is released. The game I’m looking at today is actually a sequel to Eventide: Slavic Fable, another Artifex Mundi game that tells the enchanted story of a botanist that must save an endangered plant. This may not sound interesting at first, but the story gains much more traction when players realize that the heritage park they are searching is actually home to many mythical Slavic creatures. This new title however, takes place after the events at the heritage park and places our protagonist in a whole new magical area with a new challenge to overcome.

To introduce us to this new area, the game starts with an opening cinematic. Now this may seem normal for these titles, but this one is different as it is of higher quality and immediately shows off how much better the animation has gotten. Unfortunately, this is quickly severely undercut by the sound quality of the dialogue. Some characters sound well enough, but others… Sound more like their lines were recorded with a potato. This is disappointing because I felt like this issue has been more or less resolved with previous titles. Either way, the still images are fairly pretty and most areas look rather beautiful. Appealing art and satisfying animations make the player’s trek to uncover an immortal sorcerer’s secret a joy to discover. 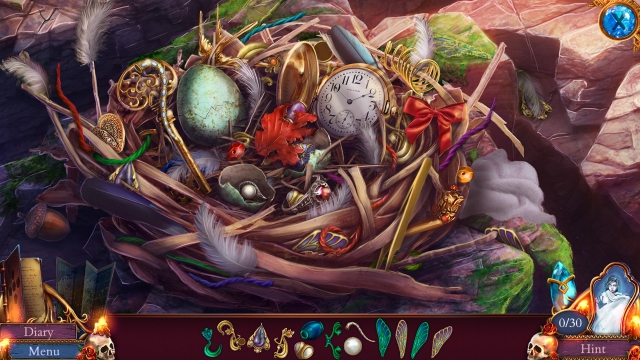 Throughout our botanist’s story, she will be confronted by numerous trials and challenges that will try to stop her from ultimately saving the people the sorcerer has captured. Most of these roadblocks will be puzzles that require certain objects to be used in certain areas or hidden object scenes. These scenes have the player find items within a given screen in order to either collect a number of the same item, find a particular object, or combine several components together to create a useful device. While nearly everything else is the same, Eventide 2 features a new choice system that claims to alter the narrative of your game and even change the ending. Although I can’t say how much the ending changes exactly, I can confidently say I have a solid idea of how the choices throughout the game would have an impact on the narrative. 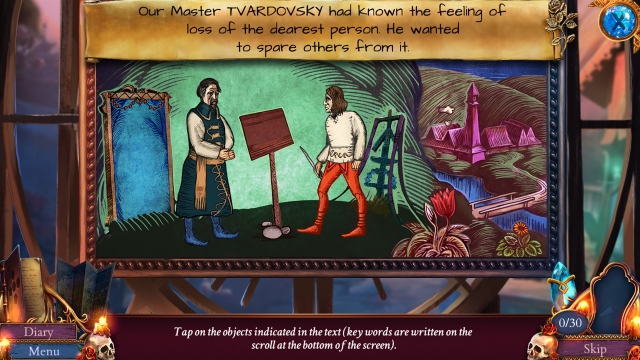 There are two sides to this statement. On one side, I feel like the choices didn’t change enough and their consequences could be figured out ahead of time. Then there’s the more positive side that considers the fact that Artifex Mundi has always done the safe thing when it comes to story and the addition of choices at all is a step in the right direction. I really hope to see more complex systems such as these moral choices and the (also) new crafting system. Before I go on to explain what I like and dislike about this new feature, I’d like to mention that other Artifex Mundi games have had somewhat similar methods of crafting items. With that said, the one found in Eventide 2 is arguably different enough to be talked about here

Before, a player might find a book or a scroll or something that has a recipe in it. Then, they would go out and find the ingredients and bring them back to the crafting area and actually create whatever the recipe was for. In this new system, the player will have the recipe in their inventory and will be able to utilise that recipe once they’ve collected the necessary items. I enjoyed this because I could actually see my progress as I went and felt like I had more control over the moments when I had to fill out a recipe. With this new system, the new moral choices, and the better animations, I can say that Eventide 2 is one of the better games from Artifex Mundi. Even though the audio quality is poorer than I’d like and the story still isn’t as enthralling as it could be, the puzzles are fun and the world is beautiful. Despite this title’s issues, I can wholeheartedly recommend it to any fan of casual puzzles and mystical creatures.

Eventide 2: The Sorcerers Mirror (Reviewed on Xbox One)

I would argue that Eventide 2 is one of, if not, the best Artifex Mundi games available on Xbox at this point. I truly hope that future titles share Eventide 2's trend of improving on previous games. Honestly though, you'll have to have played the previous titles to appreciate the changes this title has made.