When I sit and think about battle royales, there are a few words that come to mind. None more so though than pure, unadulterated frustration. I’m just not the patient type who can be plonked into a large map à la PUBG and stalk the other 100 or so players until I’m the last man standing. I just hate it when I’ve been playing a round for so long, and it all comes to an abrupt end from a sniper, or from some player I didn’t even see, or — the worst of all — somebody with an aimbot. Urgh.

Fall Guys: Ultimate Knockout is perhaps the polar opposite of all of these types of battle royales, though. Its bright colour palette and cute characters immediately put a big grin on your face as you control your little fella against 59 others through a number of stages — currently 25, including one added since launch — akin to what you would find in a cross between Takeshi’s Castle and Total Wipeout. If only we also had Craig Charles’ narration and endless innuendos… 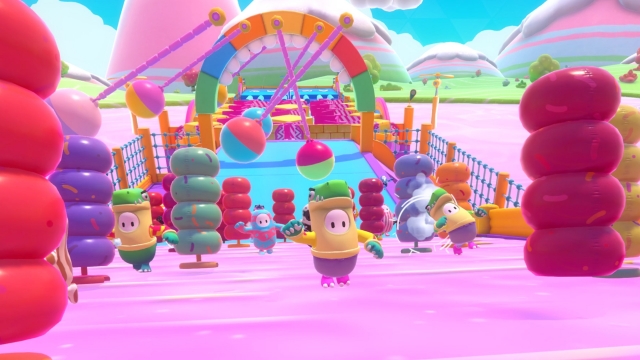 Some of the stages take a bit of getting used to, but the crucial thing is that there are none that are simply bad. They all have their own quirks, such as See Saw, which features numerous large platform seesaws that you must navigate as other players cause them to rise and fall, seemingly always the opposite way to where you are headed. Crucially, though, even when I am eliminated, it doesn’t evoke the same annoyance I find with other games of this ilk. I have found that in failure comes improvement, so when the randomiser chooses the stage again, I don’t dread it.

The other side to this is that they are quick-fire rounds. Lasting around two minutes each, a full game consists of about three to five different stages (although sometimes you may get even more) depending on how many players survive each one. There aren’t any ridiculous abilities either; the control scheme consists simply of jump, dive, run and grab. Grabbing onto other players is a bit sneaky, but thankfully not something that most others resort to considering that it’s mutually assured destruction. Race stages in particular see you needing to reach the goal before other players, so trying to pull others back — unless it’s just two of you in a home straight — just causes you to fall back even more. 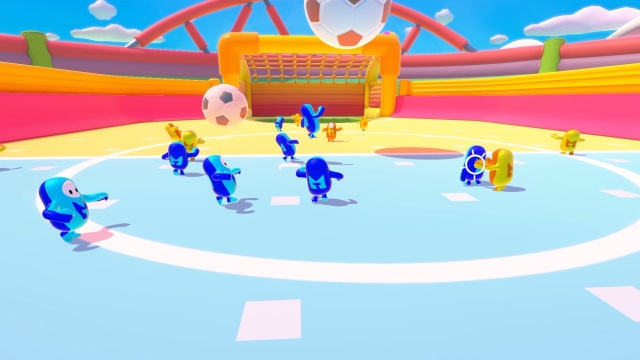 This simplicity means it’s so easy for anyone to pick up and play, something shown at launch when it was basically impossible to put in any long run of consecutive games as their infrastructure struggled to cope with the demand. Since then, it’s been smooth sailing, although one addition that really would be welcome are private matches. Currently, only four people can squad up and join the same game, so it would be nice to have private matches to accommodate more.

The final round always consists of one of four final stages, unless all players manage to eliminate themselves on one of the prior stages. These are the true sweaty palm moments, as you race to grab the crown at the end of the stage in Fall Mountain, or avoid falling into pink goopy lava in Hex-A-Gone. Jump Showdown (which was added post-launch) and Royal Fumble make up the other two, the former seeing you leap over spinning beams avoiding falling to your death, and the latter requiring you to grab a single tail from the other players before the timer runs out.

Outside of the carnage, cosmetics allow you to make your character unique and can be purchased with either Crowns or Kudos. Crowns are more difficult to come by as they are earned either by securing wins or levelling up. Kudos points are rewarded after each game, with the more rounds you survive, the more you will stack up. Store items refresh frequently, so there’s always a reason to go back and check if you’re waiting for something to come on sale. Like a cactus. 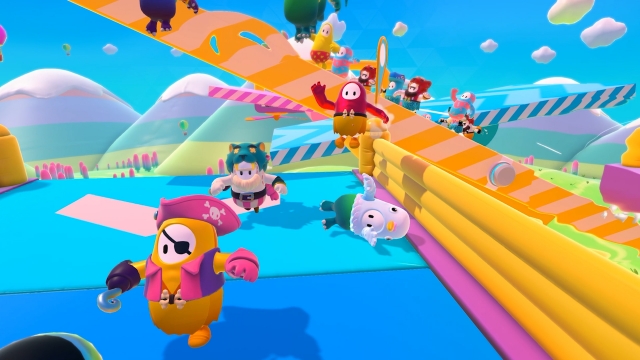 Importantly, that’s all these in-game currencies can purchase. As expected, you can spend real money to equip some of these cosmetics too but to be honest, they’re not priced horribly, and you gain no competitive advantage over anybody else. Mediatonic are using the “season” format as has been widely adopted elsewhere too, committing to continuous improvement over time with some exclusive content per season.

A custom level creator would be a nice addition too, although the developers have already commented on this saying that they don’t have anything simple internally that players could use themselves, so it might be some time before anything like this is implemented.

Fall Guys is almost the ultimate party game. It’s fun, it’s accessible, and it’s affordable. It might not lure in competitive players as Rocket League has been able to, but it doesn’t matter. It’s the purest fun I’ve had in a videogame for quite some time.

With just a few small additions, such as private matches and cross-play, this would quite simply become one of, if not the best party games available on current platforms. It can’t be underestimated how difficult it is to create something quite so accessible and fun simultaneously.