They say when life gives you lemons you make lemonade, but what if life doesn’t give you lemons? What if instead, life gives you an Asian elephant, a fully loaded rocket launcher and a fortress, bursting full of enemy soldiers lining up for slaughter. Well, at that point the lemonade can wait and you can  make more of an elephant and communist minestrone soup!

In a world full of dangerous animals, dangerous enemies and all-round danger, Far Cry 4 is without doubt one of the most exciting, entertaining and beautiful games to be released this year. Following in the success of 2012’s Far Cry 3, Far Cry 4 takes us to another region torn apart by murder, genocide and a raving mad dictator, the small Himalayan nation of Kyrat. As Ajay Ghale, a 22-year-old Kyrati born American citizen, you arrive in Kyrat to scatter you mother’s ashes. Things all go south when you reach the Kyrati border though, and instead of fulfilling your mother’s wish, you are swept into a civil war where you join forces with the Golden Path, the freedom fighting organisation set up by your Kyrati parents, in order to bring down the raving mad dictator. 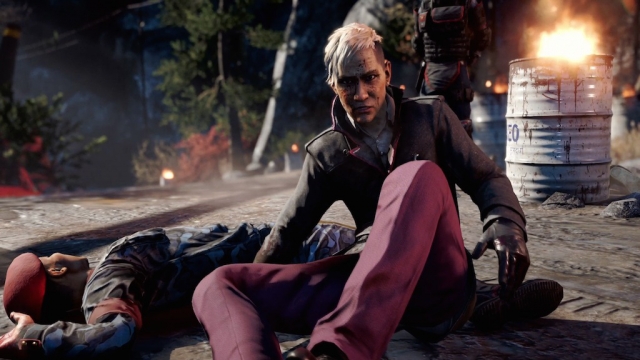 The set-up is an interesting one, and certainly more believable than Far Cry 3’s holiday goer come ‘the chosen one’ who was destined to murder as many pirates and human traffickers as is humanly possible. But Far Cry 4 hits that typical videogame character development flaw. In the space of just one mission, Ajay will transform from perplexed tourist into a cold blooded killer, hitting headshots with his bow, shooting down helicopters with an RPG and skinning bears for meat. It doesn’t hamper the game itself but you feel in a series which has become more and more about narrative, the transformation happens a bit too quickly.

The characters themselves are all a bit dull and forgettable too with no true introductions to key members of the narrative. At times you’ll be wondering who stands for what, and wondering why they are in charge. The outstanding performance however comes from the villain, as we can expect from a series which has always pushed the antagonist ahead of the hero. Pagan Min, played by videogame A-lister Troy Baker, is a well-dressed dictator who wants nothing more than to murder the Golden Path members and rule Kyrat with an iron fist. We are introduced to Pagan Min from the beginning in what is one of the greatest cinematics you’ll see to date, after he slits a few throats and takes Ajay for dinner, you will already understand what a lunatic he really is. The disappointing thing is that that will be all you will see of Min until the final act, some 15-hours through the story. There will be a few interactions via Ajay’s walkie-talkie here and there, but no full performance capture moments, and during my playthrough, I couldn’t help but feel a little short changed. With a character which had been part of marketing and displayed on the box art, he has much less of a presence than you would first think.

Despite the downfall of the story, and the forgettable characters, Far Cry 4 is a gorgeous game. The facial animations are amongst some of the best you’ll see in a AAA title, really capturing everything from tiny freckles and imperfections to true lip-synchronization and life behind the eyes. Kyrat is an equally beautiful setting, and much bigger than Far Cry 3’s Rook Island, highlighting the power of current-gen consoles. If you stand on high enough ground, you can see right into the distant Himalayan backdrop without any texture pop-in. The trees will sway in the distance and you can see birds circle well above and this becomes even more impressive when travelling at high speeds in your wing-suit or hang-glider, as the game keeps at a consistent frame-rate. But with the power of the current-gen consoles put to one side, Far Cry 4 is virtually a copy and paste of its predecessor. You’ll even come across identical missions taken straight from Rook Island: clear a runway, burn fields of drugs, and even hallucinogenic trips, it’s all very familiar, but that isn’t a bad thing. There are various approaches to everything and it means that your experience can be completely different to the next person’s. Are you the silent bow type or the blow everything up and set some tigers free type? You decide. 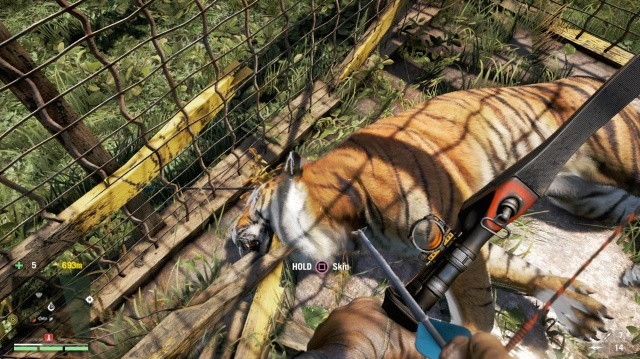 The true enjoyment factor is in free-roam mode though. Although, this again is Far Cry 3 with a Himalayan skin, with outposts to take, radio towers to free and hordes of animals to kill, Ubisoft has made Kyrat feel much more alive, and this means that on more than one occasion, you might start up Far Cry 4, play for several hours, and not even attempt a single story mission. You’ll still find the familiar hunting feature which requires you to kill four rhinos for a wallet and five tigers for a quiver (no logic there) as well as the ability to craft syringes and hundreds of collectibles to find. And with the new Karma system, which rewards you with discounts for doing good deeds, and the constant threat of losing your newly captured outpost, Far Cry 4 has made tiny steps in improving on the already near perfect series.

You can ride an elephant into battle, have your eyes pecked out by an eagle, lure a tiger to rip apart some guards or just jump off a cliff and glide your way down, Far Cry 4 really has notched up the crazy by a point or two. Far Cry 4 is everything offered in Far Cry 3 and more, with crisper graphics, a more volatile villain in Pagan Min and of course Honey Badgers, you’ll struggle to find a more enjoyable game to sink your hours into. Although the story is somewhat confusing, and the characters are barely memorable, all will be forgiven once you are armed with your bow and have an outpost full of guards to liberate.

It may just be Far Cry 3 with a Himalayan skin and a more believable story but Far Cry 4 is a game you'll struggle to put down. Whether you're battling through story missions, liberating outposts or riding elephants into battle it is one of the best current-gen games out there.