FAR: Lone Sails is a road trip game where you drive a giant steampunk vehicle across a wasteland that was once an ocean. Across your journey, your half-boat half-train behemoth will pass by the remnants of the civilisation that once was, slowly gaining new parts to go further and faster. FAR calls itself a vehicle adventure game, but I think it’s better described as a puzzle platformer since you spend the entire game jumping around solving problems.

The world of FAR is hauntingly still and beautiful, predominantly rendered in grayscale in contrast to the main character and her vessel’s red hues. It is also huge, not in a gameplay sense - the game’s run time is three or four hours - but by design. You come across a boat graveyard and the sheer size of the boats in the background make you feel exceptionally small. There are several moments further into the game that really emphasise this, but I’d recommend playing through to see how big things can get.

The vehicle is controlled by a series of red buttons, a group of interconnecting systems that come together to push the game forward - literally. The little cockpit in the centre of the beast is where the ignition, brake and steam venting buttons are. The ignition pushes itself out after a while so demands constant supervision, as does the steam vent once you start moving. Not venting steam will set your vehicle on fire, which isn’t ideal though it does start with a fire hose that is remarkably flexible. All of this requires fuel, which you get from turning boxes and barrels from the wasteland into energy, a process that takes place at the rear of the ship. 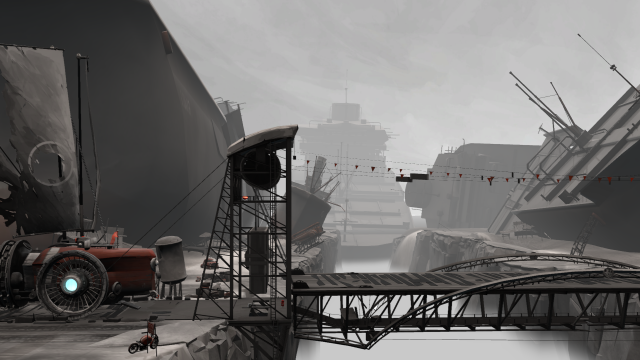 Energy runs out quite quickly, so FAR allows you to store several sources using hooks on the ceiling of the three floors that make up the ship. The game gives you plenty of items to break down into energy and careful conservation meant I never ran out. Even if you do run out of energy, ten minutes into the game you gain a set of sails which propel you along by the power of wind. This isn’t an infinite resource however, and you are at the mercy of the weather. This will depend on the section of the game you are in, and the game ensures that you won’t get stuck somewhere without a means of propulsion.

Even if you do run out of energy in a windless valley, you can pull the ship along. At either end of it there are winches which allow you to pull the ship along. Progress is slow, but it is still progress, and it proves that the game determines everything dynamically. The ship weighs a lot, and will roll down hills and carry momentum. This works in your favour sometimes, and against you on other occasions - trying to pull it up a hill will end badly for you.

The puzzles that FAR presents are almost entirely about paying attention to the world and trying things. The game wants you to be inventive with its mechanics, and while there’s only one solution to every problem they often aren’t as easy as they appear. A couple times I thought I was stuck, but I just hadn’t tried something that I didn’t think would work. Everything is taught to you through the world: there’s no text or speech or guiding light to tell you how anything works - you are instead taught everything about the game through the opportunities it gives you. 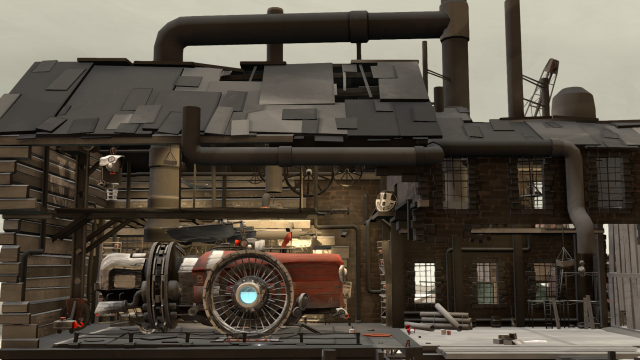 This all comes down to the design: from the very beginning, FAR has you picking up items and pushing buttons because they stand out. These things look obvious, and the game gets you to think how it wants you to through this process. As the game progresses, the challenges increase but that visual language becomes so strong that the more complex ideas the game plays with are as effortless as moving and picking up a post box. The story the game tells is tied directly into this design ethic, and in how it chooses to begin and end. All throughout we are shown facets of this world, and how we fit in isn’t necessarily obvious without the context the ending brings.

These design principles aren’t limited to just gameplay and visual aspects, but extend to the audio design as well. As you first start making your way, the music swells into a triumphant crescendo that urges you onwards. In fact, the music is fantastic throughout. On top of that is the foley, from the bangs and pops the engine makes as it first starts moving to the crashes as you burst through fences and buildings, to just the sounds the ship makes as it bumps over the environment. For a game that relies on its visuals so much as both tutorial and storytelling, the audio has been layered to bring weight to the world and encourage the exploration.

Everything about FAR: Lone Sails points to how obviously passionate the developers are about this project. It is positively brimming with soul and heart, which is understandable when you see the story behind the game. Starting as a student thesis in 2015, the game has evolved significantly since then and travelled all around the world, fitting for a game about a journey. I have only praise for FAR, and I heartily recommend it.

A puzzle platformer about a journey through an atmospheric wasteland, this game is a pinnacle of design brilliance.