As the lobster descended via a chandelier, wielding a battle axe, it was clear I was going to be in for the fight of my life. Snatching the sword out of my hand and unloading the wrath of the lobster lord on me, I was defeated. The brutal, underground scene of Fight Crab had taken another victim. Yet, I could not fall here. All 23 different types of crab had to be slain. Fight Crab is a baffling concept. At its core, it is a fighting game, with an aim to be light-hearted and comical. As a game, it offers a lot more than comic relief. Admittedly, I did go into Fight Crab expecting comical tat, but I’ve come out the other end having had an all round blast.

Yes it can be frustrating and clunky at times, but the absurdity of whatever comes next just keeps you playing. As a game, Fight Crab offers a throwback to the long lost days of the arcade. From a garish title page to its pulsating soundtrack, an arcade vibe was clearly targeted. All things considered, the game does a great job of recreating that feeling, the only thing missing is some flickering ‘insert coin’ text in the top corner. Fight Crab is humorously self-aware, refusing to take itself too seriously. Which begs the question: how well does the joke hold up? 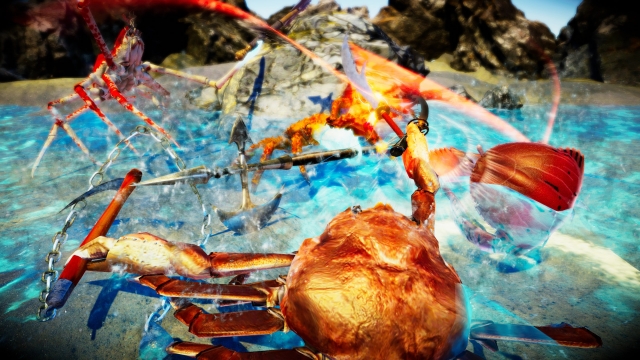 Fight Crab is hilarious, the opening line of this review is proof of the chaos that ensues upon launching the game. Nevertheless there’s more to a game than its brief moments of anarchy and Fight Crab does well to balance the funny with the serious. The basic premise is two crabs fight, sometimes more, and you have a percentage that rises the more you’re hit (similar to Smash Bros.). A higher percentage increases your likeliness of being knocked out. The tutorial becomes irrelevant as soon as you figure out the most efficient way to destroy crabs is to simply get your claws on a car and brutalise them into crabsticks. In turn, there is a correct way to play the game. Blocking with your claws and striking at the right time. It’s clearly the way to win, but that methodicalness ends in slower brawls and sucks out the fun. Frustratingly, it is the correct way forward with a few of the fights, especially later on in the game.

Controlling the crab itself can be tiresome at times too. With the type of game in question, you expect there to be some obtuse controls when in play. Unfortunately forcing the player to tap up on a d-pad to start walking forward and then tap down seems like a short sighted decision. Admittedly, the point of the crab is to be difficult to control, but just holding up and down would have made the game more enjoyable in my opinion. Keyboard players will also struggle, although it is made clear that the game is better optimised for a controller. I tried the keyboard out, but there’s just too much chaos to really enjoy the game without a controller. As to be expected with a game of this type, general issues tend to occur during the height of battle. Scenery has a habit of flinging itself around everywhere and the player can get stuck occasionally, but it tends to be part of the parcel.

To move away from the negatives, there is a lot of joy to be found in Fight Crab. The visuals are simple, allowing the game to do a lot more with the level design. The crabs themselves look really good and they are the stars of the show. The backdrop is usually lost in the shuffle of flying cars and handguns. Despite its occasional clunkiness, the gameplay is a blast too. The lack of refinement adds a charm that, while frustrating at times, generally adds more fun to the game. On top of that, there’s not many things more satisfying than slapping a palm tree out of a crab's hand then beating it to death with a lamp post. The campaign mode is pretty beefy too and will take a good two to three hours to beat the whole thing. Plus, it is worth a go over on a harder difficulty. Fight Crab offers both online and offline co-op. Although the online wasn’t thriving, I had a blast testing it out locally. Clearly Fight Crab brings a competitive edge to the versus game mode, but the game is silly enough where it remains civilised fun. The lunacy of the experience will go down a blast too.

On the whole, Fight Crab takes a silly idea and executes it about as well as you can. It certainly has its rough moments, with a frustrating control scheme often being the cause, yet it offers a lot more in the way of fun. The campaign is lengthier than expected and users will get good value in that alone, plus the variety of crabs, weapons and stages. People will find good fun in its versus mode too, with Fight Crab offering a unique challenge for both new and experienced gamers.

Although rough at times, Calappa Games have created something fun and light-hearted that a lot of people will get their fair share of joy from.