I’m going to be upfront, I really enjoyed last year's Final Fantasy VII Remake. I should make clear that I was not alive when Final Fantasy VII released for PlayStation in 1997. I have no nostalgic connection or childhood bond with the game. To me, the original is an important and highly influential game that I have not played. I found the remake to be heartwarming with its mixture of schlocky cheese and over the top self-seriousness. In a videogame industry full of ironic complications and cynical riffs on classic tropes, it is at times nice to sit down and fight a battle of overwhelming good versus diabolical evil. It also helped that underneath all the cheese and over the topness was a very meticulously crafted action RPG. The hybrid real-time and turn-based combat system is borderline addictive with its ease of access and incredible flow; making encounters both fun to play and intense while never stealing the player agency.

Final Fantasy VII Remake Intergrade is just a technically enhanced version of Final Fantasy VII Remake. It is not a remake of a remake, instead, it is a simple tech update with a new DLC. In fact, if you already own a copy of Final Fantasy VII Remake and a PS5 you get the tech update part for free. Intergrade adds two new graphical modes with performance (no 4k but 60 FPS) and fidelity (4k but locked at 30 FPS) allowing players to choose the overall look and feel of the game. I played primarily on the performance setting during my playthrough as the game runs at a consistent and smooth 60 FPS with very few frame drops, however, the fidelity setting does have its merits as the 4K textures do look quite stunning. The other big change Intergrade makes is the fixing of many of Remake’s mediocre muddy background textures; replaced instead with crisp textures that are on par with many of the game’s impressive character models. 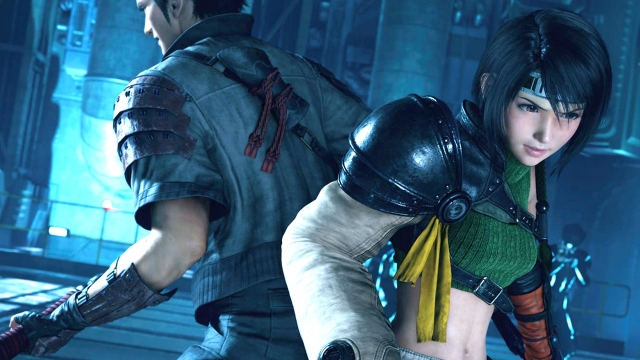 The new content for the game comes in the form of a DLC titled Episode: INTERmission. It is a fairly short romp with its main story clocking in at roughly four hours. But it serves as a testament to the best aspects of Remakes gameplay loop with none of the bloat. INTERmission sees the introduction of fan favourite character Yuffie Kisaragi, on a mission to infiltrate and steal the ultimate materia from Shinra Electric Power Company. Yuffie is a fantastic addition to the game. She is bright, cheery, and funny while never feeling cheesy or forced. And while the story won’t blow anyone away, it serves as a nice display of the best parts of Yuffie’s character. On top of this, she is one of the best-designed characters in the game combat wise. Her combat style is a mix of hyper-aggressive nimble action and cutting edge defence. With a unique balance between melee and ranged attacks, Yuffie managed to steal the show for me. Yuffie is without a doubt the most fun I’ve had controlling a character in Intergrade.

Final Fantasy VII Remake Intergrade is the new definitive edition of the game. Solving many of the original releases tech issues while also increasing performance to match next-gen hardware. INTERmission is a fun and lively DLC that manages to deliver my favourite character in the remake universe so far. Yuffie is as fun to watch in a cut scene as she is to play, managing to elevate a fairly mediocre story to something much better. If you enjoyed Final Fantasy VII Remake then Intergrade is just more of what you liked with none of the tech issues and a fun piece of new content.

Final Fantasy Remake Intergrade is technically impressive. Fixing many of the original release’s technical issues while also improving the game for next-gen hardware. INTERmission offers an excellent character edition with that of Yuffie with some excellent gameplay to boot. Intergrade is simply more of the best parts of Final Fantasy VII Remake.