Regarded as the best football management game in years past, the recently released and aptly named Football Manager 2009, or FM09 for short, is a game that is as much about the sporting passion as it is about numbers. However, should the fact I could almost copy and paste my review of last year's Football Manager be of any concern to you? You would do well to read on to find out...

For those new to the series, FM09 is a game about managing a football team. Oh, you've guessed that much already. In any case, by means of a well-designed wizard, you kick things off by choosing which of the dozens of countries and leagues you would like to have loaded, in addition to what sized database. After that, and a bit of a loading pause, you then create one or more managers and choose which team you would like to manage. Incidentally, you can also start unemployed, but after 3 months of no job offers I gave up on that approach. Soon after, albeit after some more loading, you are free to embark on your triumphant management career. 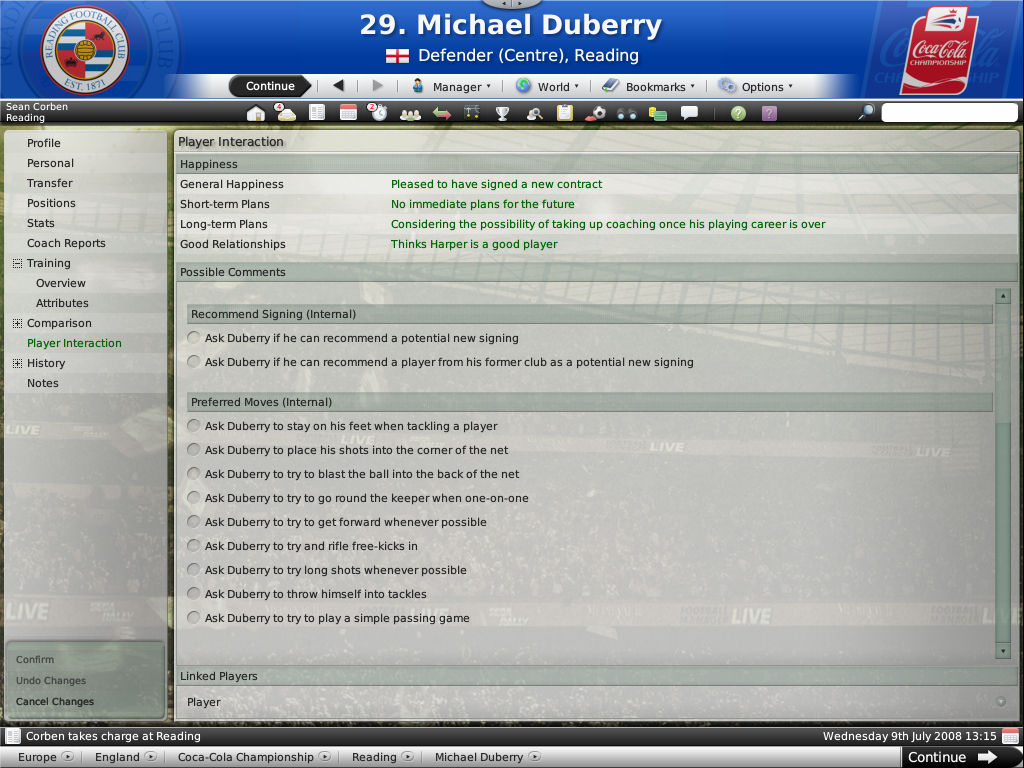 You essentially start with a squad of players, each of which have a wide range of rated skills, ranging from tackling to determination to agility. Each stat is ranked from 1 to 20, with the former meaning useless and the latter highly skilled. By virtue of judging who is skilled at what, you just need to allocate your eleven starting positions and decide on your tactics. The interface, though a little daunting at first, is well thought out, and there are useful tutorials and hints to get you in to the swing of things. The whole game can be simple if you wish, but the real success of Football Manager comes from its super in-depth gameplay.

The buzz of exploring the transfer market is one of joyous nature, as is snapping up a top player. Jostling with the press, other managers and board members is an interesting experience, and even trying to squeeze the most out of your training schedule can be entertaining. All-in-all FM09, like its predecessors, is a pleasurable and encompassing managerial experience. Naturally that holds more truth when you're doing well in the league, but if you allow it to, FM09 can sap hours of your life away without you even noticing.

The majority of the graphics are still just text and numbers, which are at least crisp and in lovely shades of grey and blue. Nevertheless, the real significant point of debate is the new 3D match engine. In what should be a historic moment in the Football Manager series, it has been released in an ugly and unpolished state. The graphics are comparable to Actua Soccer '95 drawn on paint, yet they require a modern computer to run. You can revert to the 2D dots engine, but even then you will need at least an ATI Radeon 9800 or Nvidia FX 5900 Ultra to get it going. To add to this complaint, I also feel the need to point out the increased loading times before each match, which becomes wearisome.

After having said all this though, I do actually like the new engine. Seeing my cute little team run around with actual arms and legs is hardly a notable improvement, but more over it just feels more involving. Whether this is down to seeing the ball actually curl around the stretched arm of the goal keeper into the back of the net from 35-yards, I am not actually sure. For me it does feel like an improvement, but for others, like those on older computers, it is going to seem like an extra burden. It is a shame the game's developers, Sports Interactive, could not have released a more efficient and beautiful engine, but maybe they wanted to save something for next year. A new patch, which is promised to address some of these current issues, should be released by the time you reading this. 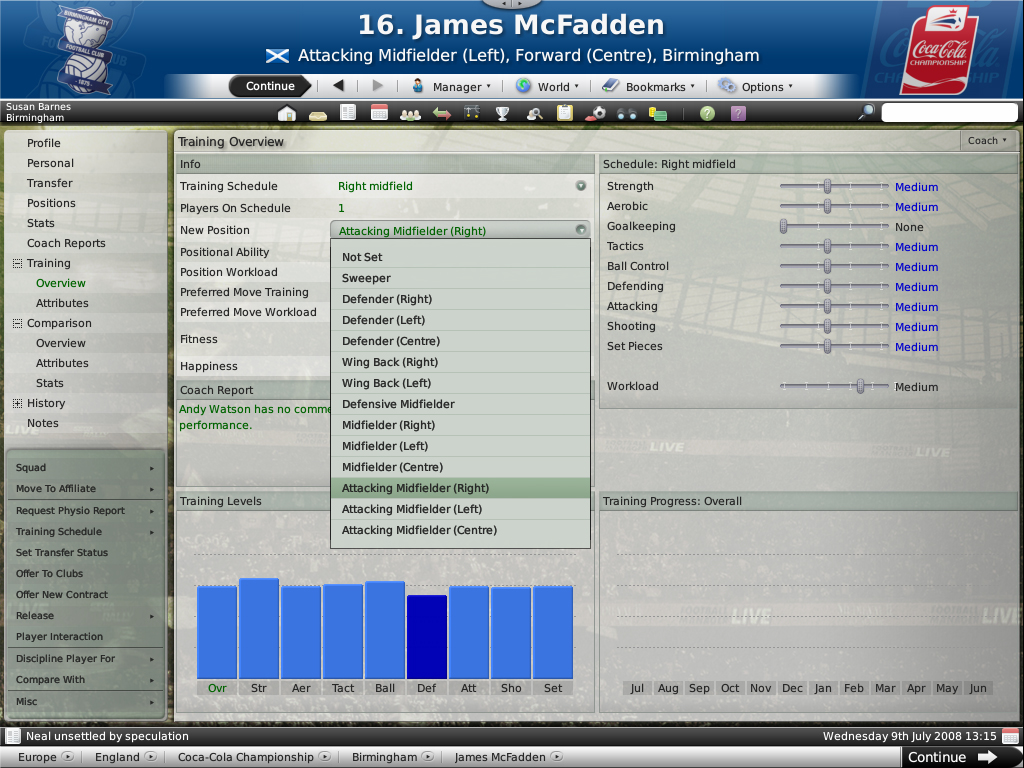 I will now be audacious and commit a whole paragraph to explaining the other new features. Manager interaction takes another baby step with the new press conference feature, where the adorable press get to ask you lots of probing questions. The particular highlight being the ability to storm out should you feel the need. Player ratings are now in decimals rather than whole numbers, and previous player match ratings are now shown in little bar graphs, both of which I felt just gave the game feel a further degree of unnecessary complication. However, nice new touches like assistant manager feedback takes the immersion level to exciting new heights, with the overall jibe being that this is the most complete managerial game in the series to date.

One area that hasn't been particularly touched on since last year is the sound. Crowd noises are still there, largely forgettable as ever, and that's all there is to comment about - there is certainly nothing to shout about. And yes, I did use that same pun in my Football Manager 2008 review last time around, but I thought that touch of irony would at least fill this paragraph up. Some other completely unchanged elements in the game include the lack of complete Premiership rights, while the jubilation of scoring a 93rd minute winner still never loses its charm. 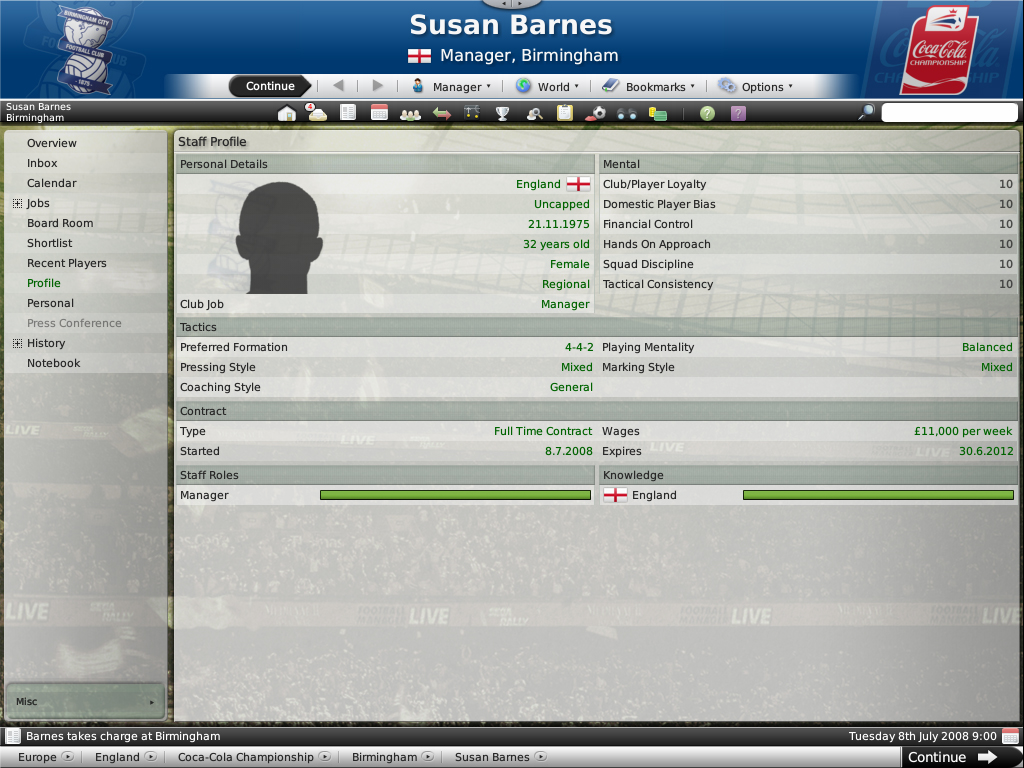 To provide my concluding judgment then, I would start by saying FM09 is the most complete version to date, but there is little new in the way of groundbreaking features to get excited about. The significant new change, the 3D match engine, does the job but is disapprovingly flawed, which could prove critical to some. To add to this annoyance, you have to initially activate the game via Steam or Uniloc, which proved a nightmare to many on launch day. This has since improved, but is still a new and unwanted inconvenience.

If you are yet to own a Football Manager franchise then I highly recommend trying out at least the demo. If you enjoy that, then I have no doubt in saying that you will enjoy the full purchase. If you owned Football Manager 2008, or even 2007, then this is a lot harder to recommend. If you cannot live without the updated team and player database then go ahead and treat yourself, but the best transfer policy I can give you is to wait until the game comes down in price over the Christmas period. So why the relatively high overall score? Because FM09 is still a superb amount of fun to play, and it is by far the most realistic way of managing your beloved team of players to silverware glory.

If you are yet to own a Football Manager franchise then I highly recommend trying out at least the demo. If you enjoy that, then I have no doubt in saying that you will enjoy the full purchase. If you owned Football Manager 2008, or even 2007, then this is a lot harder to recommend. If you cannot live without the updated team and player database then go ahead and treat yourself, but the best transfer policy I can give you is to wait until the game comes down in price over the Christmas period. So why the relatively high overall score? Because FM09 is still a superb amount of fun to play, and it is by far the most realistic way of managing your beloved team of players to silverware glory.

So a week on since release how are people finding it? It generally seems very similar to the last years release, but I'm still enjoying taking mk:dons (randomly selected, as opposed to trying to impress TGK ;)) to 2nd in League 1, with Robbie Fowler and Freddie Lunjburg for <20k each my best signings :D Comon I know there are plenty of FM fans here, you must have some stories to tell :)

Currently in 2010 / 11 season with Barnet. Survived in League 2, had an awesome run but on a slump of 7 games. Gotta make it to the end of the season in a decent position for a contract renewal.

Started in second season with FC United (they got promoted into Blue Square North in first season) It's pretty much the ultimate challenge to get them to be a European superpower. First season is going well, out of the cup but 5th in the league.