We’ve been spoilt as gamers with generations of fantastic 3D platformers. Mario pretty much nailed it with Mario 64 and the subsequent Sunshine and Galaxy games added a polish to the already solid platforming elegancy. After so much excellence it’s become difficult to distinguish a bad game to one that’s ‘Not quite Mario’. There may not be anything fundamentally wrong with the controls or the aesthetic but maybe the game isn’t quite as tight and slick as in Super Mario Galaxy. On the other hand, it’s not so difficult to pick out a game that’s not just fundamentally bad but a chore to play. Enter, Freeze Me.

FreezeMe has you, bowl-haired protagonist R, looking to save her dog. M has been taken by Fat the Cat - the game’s antagonist - that wants to create a dog-free world. It’s a story barely mentioned in the game by anyone and won’t bear any significance to your disappointment for FreezeMe than it would have without it.

FreezeMe is clearly aimed at kids with its PG humour, vibrant colour palette, simple story, youth-pandering characters, and basic animations. Despite its description, it’s difficult to consider this anything close to an entry-level title for youngsters unexposed to the treasures in platformers due to its consistently flawed nature.

Intentionally, there are several similarities to classic 3D platforming and adventure games of old. Before entering a level from the game’s overworld, you select the golden block mission you want to take part in; a clear homage to 3D Mario games where you select the ‘Star’ you want to get prior to starting the level. Unlike Mario, where the level changes somewhat based on the mission you choose, FreezeMe keeps a bunch of the obstacles and signage throughout. This means that there’s a vast amount of redundant garbage that litters the world and makes things more confusing than anything else. One example, are signs that say ‘Are you lost?’ gesturing towards one area of the map which actually diverts you to a racetrack for a different mission; pointless and misleading. 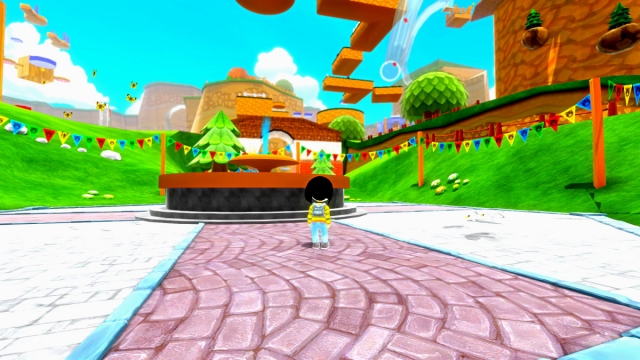 R’s gimmick is her ability to freeze enemies and objects using the camera around her neck. It’s a neat idea and could be seen as a beta version of Zelda: Breath of the Wild’s Stasis. The camera and the mechanic are a unique idea, but it’s FreezeMe’s basics that aren’t polished - you know, like platforming and character movement.

A couple of the earlier missions task you to squeeze through small gaps without being burnt to a crisp on cross-shaped rotating fire pillars. Yet, the sharp acceleration of R’s movement is so jarring that there’s no hope of you getting through unscathed without a stroke of luck. Somersault jumps are asked of you from small and moving platforms, but the sluggish movement of R when changing direction makes for frustrating play, as you find it difficult to turn around sharply enough to trigger the jump. These two together make for some pretty upsetting play. In general, as the platforming is so inconsistent levels take five to ten times longer to complete as you find yourself pressing the jump button ever harder, knowing full-well it won’t make a difference to any platforming predicament, like jumping from one obstacle to another.

Disappointingly, the camera also goes in the ‘negatives’ column too as it’s practically unplayable in Auto mode due to how much is moves, judders, and freezes. Fortunately, there’s a manual mode allowing you to use the right analog stick to spin the camera as you wish, but this shouldn’t be a necessary switch. 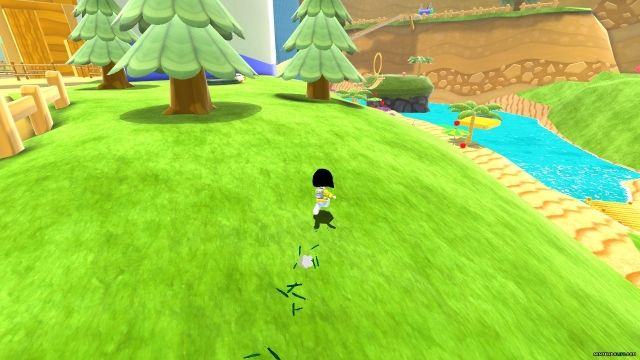 Along with the visual and technical displeasure, an obnoxious flurry of generic sound effects atop of the same single monotonous tune aims to cause audible pain too. It took a level and a half before I had the TV on mute, in the hopes of preventing permanent damage to my sanity.

I feel like I would be more forgiving of FreezeMe had it been an Early Access game. It's not though - officially licensed by Nintendo and apparently fit for release. Whilst Raining Night Creations is a one-man development studio, and the vision of ‘taking the best of original platformers’ and merging it into an exciting, sharp and consistent indie title sounds fantastic, his idea of the ‘best platformers’ was apparently Bubsy 3D. FreezeMe simply can’t live up to the big promise.

It seems harsh but FreezeMe is ironically dull, repetitive beyond repute, as well as clunky in both camera movement and basic character manoeuvring. I genuinely hope that the Barcelona-based developer takes the criticism onboard to go back to the drawing board with simple, satisfying gameplay. For now, there’s little to recommend.

FreezeME (Reviewed on Nintendo Wii U)

It seems harsh but Freeze Me is ironically dull, repetitive beyond repute, as well as clunky in both camera movement and basic character manoeuvring. I genuinely hope that the Barcelona-based developer takes the criticism onboard to go back to the drawing board with simple, satisfying gameplay. For now, there’s little to recommend.