Since Gears of War 3’s release in 2011, and franchise creator Cliff Bleszinski’s departure from the series, the Gears of War franchise has had difficulties maintaining relevancy. The prequel game Gears of War: Judgement failed to resonate with fans and newcomers alike, and The Coalition’s continuation of the series Gears of War 4 was a relatively limp instalment, feeling uninspired and forgettable. Now, The Coalition is back with Gears 5, and it seemed obvious from the game’s marketing that the team was trying to put its own spin on the series, with a darker and more psychological tone. While Gears 5 does certainly feel more distinct than its predecessor, it also unfortunately brings with it a host of other issues.

Early on, Gears 5 leaves a strong impression, managing to throw in some nice curveballs into its narrative and doing a good job of mixing beloved old characters with the less endearing new cast. The first act of the game might feel like the typical Gears of War affair mixed with some clever level design such as a shootout in a theatre where moving props are used as a cover, but the second act is when the game really comes into its own, both in its narrative and gameplay structure. Due to some major events in the first act, the second act sees players going on a separate mission with two characters from the fourth game Kait and Dell, as they try to explore Kait’s connection to the Locusts, which is causing her to have manic episodes and disturbing hallucinations. During this act, players are treated to a more open area which is explored using a skiff, with the open area being home to a variety of different side missions and objectives. It’s a nice change of pace for the franchise, messing with a structure that’s grown somewhat stale by this point.

Unfortunately, this strong start doesn’t transition into the second half of the game. While the first open area is a positive change to what is expected from Gears of War, the formula becomes stale during the second open area, with every side objective just leading to more shootouts in usually less creative areas than in the main objectives. The plot also manages to derail itself, giving up on Kait’s internal struggles and instead focussing on the usual war conflict that’s been the point of focus for the entire franchise. It’s a shame that neither of these ideas are pushed further, because they’re hands down some of the strongest elements of the game, giving Gears 5 a much-needed stamp of individuality from the rest of the series.

Another change to the formula comes in the form of Jack, a robot companion that aids Kait and Dell on their quest. Jack isn’t just an AI-controlled partner, but he can be given direct orders and commands, being able to use a variety of different abilities such as turning players invisible and providing health buffs. Jack can also be upgraded with components found throughout the game, incentivising extra exploration and an awareness of the surroundings as a whole. He’s by far the strongest addition to the game, adding an extra layer of genuine complexity to combat situations as well as giving players a reason to slow down and observe the different areas. 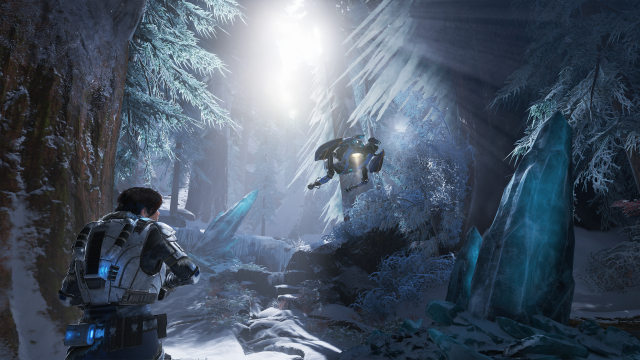 Multiplayer modes also make a return in Gears 5, with online versus matches and Horde mode operating much like they did in the previous instalment. The biggest addition to multiplayer comes in the form of the brand-new Escape mode. As the name suggests, in this mode players have to escape various facilities, with escaping in the shortest amount of time being the main objective. Each player picks a different character at the start of the match, with each character having their own set of unique abilities, such as being able to drop ammo, or create a decoy to distract enemies.

There’s certainly nothing wrong with the mode, and in fact it’s been quite well realised. Each character is vocal about what they’re doing at a given time, meaning that even if you’re not playing with a group of friends it can be easy to have a sense of co-operation and planning. There is also a selection of difficulty modes, and the ability to create custom courses, adding an extra layer of replayability to the mode overall, giving the hardcore Gears of War community something to chew on. The main issue is that Horde mode already offers a similar experience with giving players waves of enemies to blast through as quickly as possible, and it offers even more depth and planning with extra customisation features. It’s not that Escape mode is fundamentally bad, but it feels like nothing more than a short-term distraction The most damming part of Gears 5 is the egregious number of glitches that permeate through the whole experience, getting in the way of even the game’s strongest aspects. These technical issues ranged from slightly irritating - such as button prompts not appearing – to downright game breaking. Several times a checkpoint would have to be restarted because a door wouldn’t load, or for some reason the skiff would be clipping through the environment, making it impossible to board it. The worst example was when progress for a completed side quest had been wiped, and upon replaying it the object that was needed to complete it again wouldn’t appear. Pair these issues with numerous disconnects in co-op during the first few days of launch, and the game felt borderline unplayable at times. These kinds of issues would be problematic in any game, but it’s even more unfortunate to see it happen in a mainline instalment in a franchise that used to pride itself in polish.

Gears 5 feels like a desperate attempt by The Coalition at trying to carve out a new identity for the series, but the execution feels half-hearted. Kait’s internal struggle was an interesting spin, offering a type of conflict that hadn’t been fully explored in the series before, but it ends up being resolved by the halfway point without much long-term drama. The pseudo open-world skiff exploration is enjoyable early on, but the uninspired objectives end up making it feel dull after a while. Escape mode has obviously had some thought and consideration put into it, but it doesn’t feel like it has much longevity despite The Coalition’s attempts. When Gears 5 hits with some genuinely interesting story moments, and creative set pieces and scenarios, it manages to make a case for why Gears of War still has a place in modern gaming. Unfortunately, most of the hits are met with some kind of miss.

Gears 5 feels like a desperate attempt by The Coalition at trying to carve out a new identity for the series, but the execution feels half-hearted. The pseudo open-world skiff exploration is enjoyable early on, but the uninspired objectives end up making it feel dull after a while.

Gears 5 Won’t Include a Season Pass