The Gears of War series has had a few improvements over the years since the first game launched in 2006, but the core gameplay mechanics have stayed relatively the same. It’s always been the third-person, gore-heavy, cover-based shooter that fans adore, but now The Coalition and Splash Damage have taken all that and applied it to the X-COM formula with Gears Tactics.

For those who aren’t familiar with X-COM, it’s a turn-based tactical shooter where you control each character’s movements/actions to take out the enemies as swiftly and precisely as you can. Gears Tactics takes all that and essentially puts a Gears of War skin on it with the abilities, characters, visuals and sound design beaming with that Gears of War flair you know and love. Fans of X-COM will immediately know what they are doing as soon as they boot up Gears Tactics, but even if you’re just a Gears of War fan, this is much easier to pick up than other turn-based shooters.

In Gears Tactics, you get action points for each character, usually up to three, and you’re able to do any action you want with those three points such as moving, shooting, throwing grenades or using abilities you acquire by levelling up. There are five classes; support, vanguard, sniper, heavy and scout with their respective weapons and a skill tree for each that branches off into four different paths. So, you can have multiple of each class and have them play completely differently because of the abilities tree you went down. Unfortunately, not all the ability paths are equally as good so you might end up making everyone semi-similar like me. 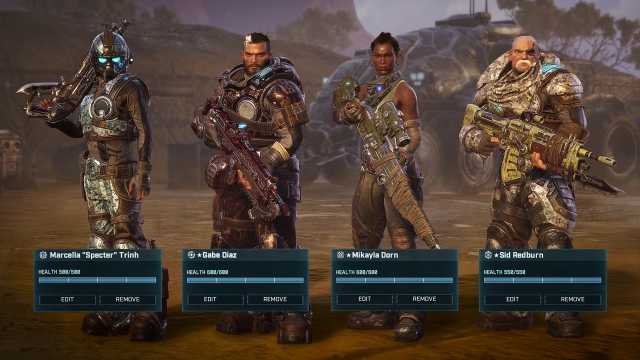 Other than abilities, your troops can be upgraded with attachments for their weapons and different armour pieces which all have a visual change on the characters and weapons. New gear can be obtained by finding crates in-game and/or completing missions and side objectives. Gear is color-coded to signify if it’s common, rare, epic or legendary and the better it is the better passives and upgrades it may carry. Passives could be like the ability ‘blitz’ where you have a chance of getting another action point at the beginning of your next turn, or ‘champion’ which will heal your team if you get an execution. Your team is made up of troops and heroes which can be customized pretty extensively, but troops are more customizable than the heroes. Troops are recruited within a menu and can permanently die like X-COM, but since heroes are vital to the story, they must live to continue the campaign.

Gears Tactics is a prequel story that builds upon what you have been learning with these new games from The Coalition by introducing Gabe Diaz, the father of Kait Diaz (the protagonist in Gears 5). Set 12 years before the first Gears of War, the Locust horde is attacking once again while being led by Ukkon, a Locust leader who is also creating his own monstrosities to do his bidding. Your goal is to put an end to Ukkon and discover the truth about the Locust and even the COG (again). It’s a story you’ve seen before, but it still captures your attention with great characters and moments sprinkled throughout that Gears fans will enjoy. There are a few key differences compared to X-COM that either improve upon or hinder the formula. One of them being that it follows a linear campaign whereas the X-COM games allow for more freedom on what missions you want to pursue. I felt more engaged in what was going on because of the linear campaign, but Gears Tactics’ side mission structure really slows down the pace of the story especially towards the latter half.

Side missions pop up after what feels like every other main mission and are required to proceed through the three acts of the campaign. As you get to other acts, you are required to complete more side missions: for example, in act one you complete one side mission, act two you complete two and so on. Towards the end of the second act and for the remainder of the game, the side missions feel very intrusive with the pace of the story and become repetitive and stale since they are essentially the same structure as story missions.

Gears Tactics has a few types of missions: control, scavenger, rescue and sabotage. Control has you going towards a point and holding it until you collect enough supplies. In Scavenger you have to collect a certain amount of crates on the map. Rescue has you trying to save other teammates or civilians before the timer runs out. Sabotage is essentially killing everyone on the map so you can plant a bomb without distractions. You’re essentially going to be rotating within these missions as the game goes on, but what differentiates them is the optional objectives and modifiers which can help or challenge you in interesting ways. An example for a way it may help you is having a modifier giving you more movement range than usual, but to challenge you they may give the Locust that ability instead. The bigger the challenge the bigger the reward. While Gears Tactics doesn’t look as beautiful as last year’s Gears 5, it is definitely the best-looking turn-based shooter game out right now. The cinematic cutscenes look as good as Gears of War 4, with what appears to be a slight cel-shaded look to them that differentiated enough to make it feel fresh. In-game looks just as good with fantastic lighting, textures and models for everyone, even for the countless troops you recruit. Performance-wise, it ran at a smooth 60FPS on high settings while cutscenes were at a stable 30FPS. The UI can be rather confusing to navigate with so many menus you have to click into and then click out of and the icons for some of the attachments don’t make it clear what it is.

Gears Tactics does a fantastic job at applying the X-COM formula to the Gears of War franchise despite it not changing much from the core gameplay. While the intrusiveness of side missions and some weak ability progression take away from the overall experience, Gears Tactics is a must-play for Gears fans and turned-based shooter fans alike.

Gears Tactics does a fantastic job at applying the X-COM formula to the Gears of War franchise despite it not changing much from the core gameplay. While the intrusiveness of side missions and some weak ability progression take away from the overall experience, Gears Tactics is a must-play for Gears fans and turned-based shooter fans alike.

Gotta agree with the review! Having a blast with Gears Tactics... It's making me face up to my incompetence with turn-based strategy.