Having been offered the opportunity to visit an event held by the publishers Namco Bandai for their latest title, Get Even, I went in blind and sceptical. Among other intrigued journalists and gamers, we were welcomed at the John Barry Theatre at Pinewood Studios with a presentation from the developers, The Farm 51. Joining them were the game’s composer Olivier Deriviere and writers Iain Sharkey and Stephen Long.

A large chunk was presented by Olivier, who wanted to bring closer attention to the game’s audio and music. As a primary focus of the title, all throughout the presentation, we were shown examples. These varied from the atmospheric ambience filled with foreboding, to the clash of an orchestral symphony. It was clear the music and sound were at the heart of Get Even.

After a lovely slice of live music from the game’s soundtrack performed by The Brussels Philharmonic, I made my journey home. During that time, the feeling of blindness still remained, but the scepticism was replaced by fascination and interest. It wasn’t just the music that caught my attention it was the story as well.

Get Even, despite looking rather generic at first, isn’t your run of the mill first person shooter. It's a psychological thriller that explores mind and memories, through a story of loss, grief, and regret. It’s heavily doused in the story to the point that even during the presentation, the developers spoke little about it, for fear of spoilers. Even the released trailers, which are highly recommended to watch, are shrouded in deception. They craft a somewhat ambiguous narrative to draw you in but do not spoil the main game. Taking place in England, you play the role of Cole Black, an unhinged mercenary. Finding yourself in a traumatic event, you’re tasked with searching for a kidnapped girl in a derelict building. The grounds are surrounded by other mercenaries on guard, showing the kidnapping was a professional a job so you have to be cautious.

As you progress through the derelict buildings, your perception of the world becomes distorted. The music builds into a heart-racing pace of anxiety as you reach the girl only to find her tied a bomb counting down. Fearing that you’re too late, the realms of reality both real and virtual clash as you then awaken at an abandoned asylum. It’s from here where your journey begins.

While Get Even has the player experience a twisted virtual reality, it’s not a VR title -- but it does revolve around an in-game device called the “Pandora”. The Pandora device appears to be a revolutionary for therapy, but like a twisted episode of Black Mirror, things are not what they appear. When you awake at the asylum, an anonymous voice calling themselves Red contacts you. They created the Pandora and need your help. Black, on the other hand, has other motives. He’s seeking his own answers, questioning reality and where he is. Throughout, he has his moments of hostility towards Red, but as they seek the same answers, he has no choice but to comply. With much of his memory lost, the Pandora traces out memories of Black’s past, allowing him to relive them. The memories are the key, and the decisions made when reliving those memories can have an effect on the overall story.

Get Even encourages exploration; just relax and explore, as Red says. Playing detective, each section is broken up into specific case files revolving around the kidnapped girl. You’ll find many text documents, notes, letters and printed emails that help piece together each case. At most, they stand out being pinned to walls and can’t be missed, but others can be more obscure and will test completionists. 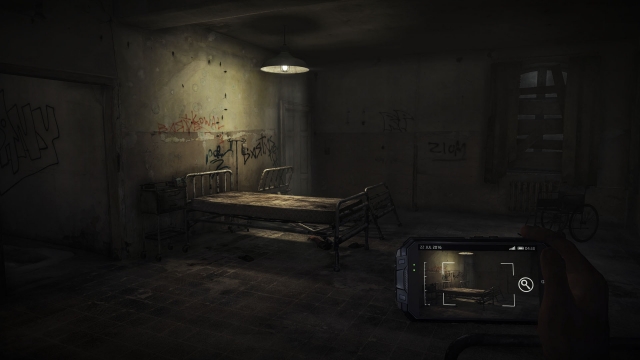 Your primary gadget for this task is your smartphone, and it allows for multiple in-game options. Included are a scanner, infrared, map, and mementos like photos and messages. You can toggle between them at any time, but I favoured sticking to the scanner.

Flashback moments are also put in place to further expand the story and explore the characters. They’re not cutscenes per say, but interactions revealed using Black’s smartphone scanner. The characters are portrayed as photorealistic depictions of the actors in a standstill. With a glowing aura around them, they appear as fragmented memories revealing more of the ever-expanding narrative of Get Even.

Some memories trigger dream sequences within to drag you further down the VR world to explore the narrative. As such, sometimes Black’s mind has trouble differentiating between what’s real and what is not. In some levels, you may need to recall a memory. This takes a puzzle like design where you explore the environment for triggering moments - these lead to some creative and beautiful moments on how our memories are triggered by certain situations.

Unlike other games that would collate your collected information to a set of menus or an ingame journal, Get Even has its own version of a mind palace, a place to reflect and go over information gathered. It essentially acts as a glorified level select. With replayability, you can try alternative routes and potentially find more clues to completing the case files. Eventually, the pieces interconnect and everything becomes grounded. This was the intention of the writers, who were brought on later on in development to rework the world already created by The Farm 51. 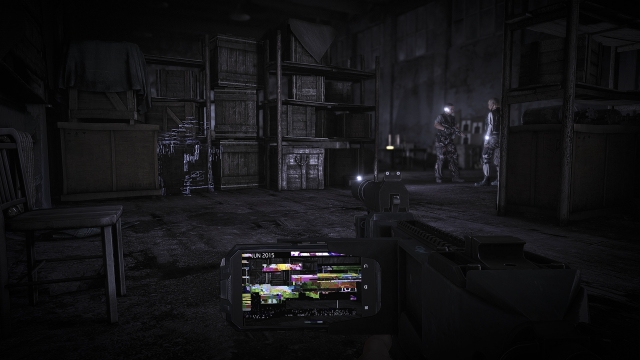 This is after all still a first person shooter and combat is certainly its weakest aspect. Not terrible, but instead, rather basic. You can equip two weapons alongside your smartphone, but the gunplay experience is rather shallow, this is unfortunate as you're provided with an intuitive piece of kit called the corner gun. This device lets you attach a pistol or machine gun and with a press of a button, you can toggle between aiming to the left or right. Your attached smartphone’s camera is then used to line up your shots.

The levels either follow a linear path or become more open-ended as you progress. Stealth is the best option along with your smartphone’s map. You’ll encounter corruptions within the simulation which can be scanned to reveal vents for shortcuts or objects to block lines of sight, allowing you to navigate through the open levels with little to no casualties. If a hostile approach is required, you’re encouraged to take the subtle route by using your silenced pistol. If spotted, enemies become relentless but not too overpowering. If going guns blazing, you can take down enemies with a well-placed headshot, but in doing so you will be condemned by Red as your actions have consequences. So use it as a last resort or if you’re presented with no other choice.

The music and sound design are the most impressive aspects of the game. Real world environmental noises are seamlessly combined with the beautifully orchestrated music. One such example was the sound of police sirens that blended with the music the closer you got to a particular scene. There is also a subtle tone of a ticking clock, which is an invasive reminder of the past events. The voice cast from the main characters to the minor is also of a high standard. Even though facial animations are few and far between. The characters within flashbacks and voiceovers are believable, with wholehearted expressed emotion that keeps you engaged. Overall, it creates a unique audio experience and wearing headphones can’t come recommended enough.

Get Even is a memorable experience. It’s so heavily doused in the story that revealing too much would spoil the experience as a whole. Deliberately depressing environments, downtrodden, and harsh, further emphasising the anxiety and sense of foreboding. The music and audio design stand as its high point, alongside the visuals and gameplay creating an immersive atmosphere. It truly is The Farm 51’s best title to date, and Bandai Namco was right to give them the extra time needed to complete it.

Get Even (Reviewed on Windows)

Get Even is a memorable experience and a well-delivered psychological thriller. Music and audio design stand as its high point, alongside the visuals and gameplay creating an immersive atmosphere. It truly is The Farm 51’s best title to date, and Bandai Namco was right to give them the extra time needed to complete it.