For all the talk of genres coming and going, the Metroidvania style has always just been there, poking its head out every so often just to remind us that it’s still around. Ghost 1.0 is one such protrusion, one that follows in the footsteps of Metroid with a female protagonist and a large space station to explore. Coming from Francisco Téllez de Meneses, the creator of the D&D inspired Metroidvania Unepic, Ghost shares his previous games humour and hand-drawn style.

The titular character is a hired mercenary capable of remotely controlling humanoid robots, working for two stereotypically nerdy guys - one a hacker, the other an engineer - who want to infiltrate the Nakamura space station. This space station houses the servers which control the Nakas, a range of human-looking servant robots - of which Ghost’s main body is a modified sample.

Ghost has an interesting way of explaining away its Metroidvania mechanics: since everything in the game is a robot, when something dies it can just be rebuilt. All of the save points on the map are 3D printers, which scan you and your upgrades and reprint your body when you die. This ties in well with the main mechanic of the game, which allows you to enter a spirit - or ghostly - form, leaving the Naka body behind and allowing you to get to places you won’t previously have been able to get to. While in the spirit form you can’t directly interact with the world, but you can inhabit other robots. This allows you to use Nakamura’s own defences against it, by using their own robots to destroy each other. 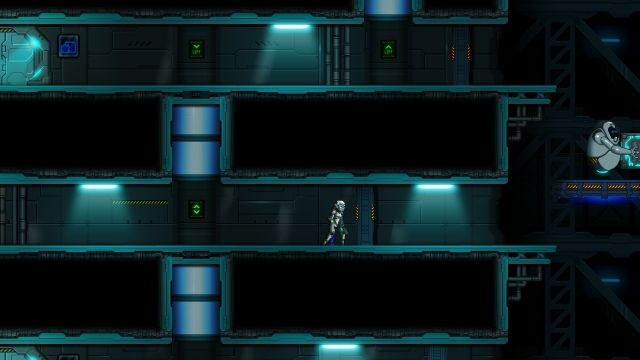 This system does have a few issues, notably the time it takes to inhabit a body. Even trying to re-enter your original body initiates a two/three second animation that leaves you very open to attack, as enemies will begin to target you as soon as you inhabit a body. This ultimately means that you are always at a disadvantage in fights against similar robots when inhabiting them in busy areas. You also require a mid-game upgrade to make dying not entirely unfair, since you lose everything that wasn’t saved when you die.

There is a slight RPG element to Ghost, through a skill table that you can upgrade when you find a specific pickup in the world. These are normally where key fragments are, which are needed to advance the story and access new areas, so the progression is intrinsically tied to the leveling. These upgrades are split into five sections, one for each of the characters in the game and one for the space station, with Ghost having one for her body and one for her spirit form. Putting a point into the different sections gets you that upgrade and a passive boost to something that each of the characters is specialised in. For example, putting points into Chassis - Ghost’s body - upgrades your maximum health, and upgrading Jacker - one of the guys who hired Ghost - reduces the time spent in “Alarm Zones”.

These “Alarm Zones” are sections that throw waves of enemies at you, and clearing through all the enemies gets you the reward of Energy Cubes, which are this game’s currency. These deplete over time while left on the ground, so it’s advisable to try and pick them up as quickly as possible. These can be spent on upgrades at shops, which are littered around the map, and are lost when you die unless you have the level upgrade that causes some to remain where you died. There are several types of upgrades, from consumable items such as health packs and a magnet that attracts the Energy Cubes, to secondary weapons that have a variety of spreads. 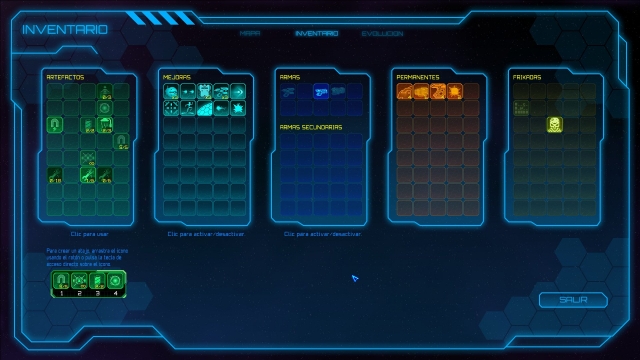 The inventory screen seperates everything out into colours

Ammo is also dealt with in a clever way: instead of having ammo pick-ups to replenish your weapons, each holds a charge of a certain amount of shots - upgradable through the leveling system - which recharges over time. Some of the leveling upgrades allow you to increase the charge rate while moving or while crouching, and there are also consumables that can be used to instantly refill your weapons ammunition. One thing I found slightly annoying is the inability to fire your primary and secondary weapons at the same time, particularly with secondaries similar to the shotgun which takes time to fire the first shot.

Another type of upgrade are passive buffs which add different bonuses to your attacks, such as an energy wave to your jump, autonomous droids that fire at enemies and a secondary seeking shot that fires every time you fire your primary weapon. I didn’t actively seek these out, but after collecting a few for completing rooms and discovering how much stronger I was after equipping them, they became a very important addition to my arsenal.

The world map is sectioned off into distinct sections, each with a few 3D printers, shops and alarm rooms. In each of these sections is a boss room, which is where a sharp difficulty increase occurs. Each of the bosses are uniquely designed with a variety of attacks, but each fight felt very unfair. One of the bosses used an EMP style attack that prevented you from moving or attacking, only to be fully barraged with shots. I actually had to look up a guide to find out how to beat that boss, because each time I died to her it seemed like there was no way to win. That ultimately wasn’t the games fault: I had missed a visual cue that told me how to beat the boss and was ergo completely unable to. 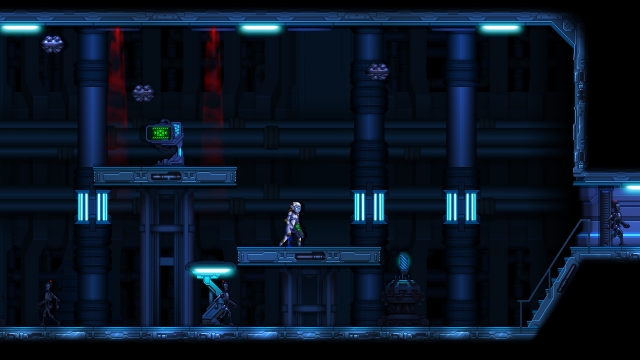 An alarm room is always obvious though not always avoidable

As with many Castlevania style games, there are shortcut paths in Ghost, taking the form of vents. Firing weapons at the walls in these rooms causes them to vent steam, which damages you pretty harshly. Since many of the aforementioned passive buffs add uncontrolled blasts, it’s a good idea to disable them when entering these rooms, and while this is relatively easy it breaks up the gameplay and for a couple of the shortcuts actually probably takes longer and puts the player in more danger. I get that these rooms have the trade-off of making you vulnerable for faster movement around the map, but you can teleport to any save points with no loss at all so I think these rooms are slightly too harsh.

There are many things about Ghost 1.0 that I greatly enjoy: its writing is clever and its story is going places that I have interest in, it controls really well and has lots of unique enemy designs. However, its final area is full of almost instant death traps that I died to repeatedly for over an hour before finally calling it and giving up. It hasn’t beaten me, but I need to take a break and come back to finish it with a fresh head after getting through a few other games first.

Ghost 1.0 is a great game with a great visual style and interesting story and characters, that has moments of huge frustration because of the insane difficulty increases.