Ghost of Tsushima is without a doubt one of the best games of 2020 with a great story, satisfying swordplay and an absolutely gorgeous open-world to explore. Many people would argue that it was the true game of the year – over the most popular choice The Last of Us Part II – for those reasons, but also for its shocking, yet fantastic, co-op mode Legends which released a few months after launch. Legends is a two to four-player cooperative mode for Ghost of Tsushima with its own story, visual style and variation in gameplay that undoubtedly sets it apart from the original game. The best part? It’s absolutely free for anyone who owns Ghost of Tsushima, which officially makes it the best piece of free DLC I’ve ever played. 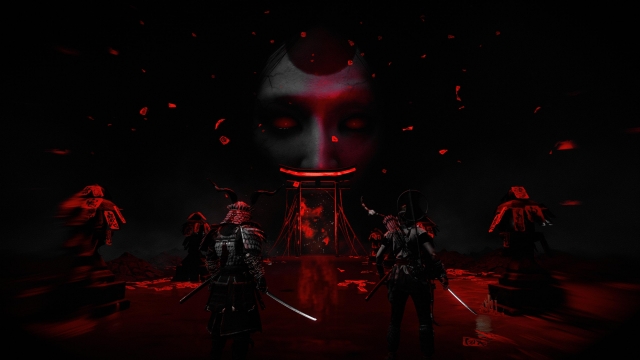 The story mode in Legends compiles nine missions that feature stories from Japanese mythology narrated by a mysterious man named Gyozen – who also voices Iroh in Avatar: The Last Airbender – as he retells the tales of the Mongol invasion from the main game, but with a supernatural twist. You play as one of the four spirits of the fallen samurai who are awakened with the task of wiping out both the Mongols and the Oni they brought with them to restore peace to Tsushima. Story missions can only be done with two players and are split into three relatively short chapters, but each gives you the freedom of choice in whether you want to play it stealthily or announce your arrival like a true samurai. Most of the mission structure is roughly the same for each mission (clear the area, rescue hostages, etc.), but there are a surprising number of new enemies that make it varied and more challenging than ever. Missions will also have a difficulty rating from bronze to gold that can only be increased if your samurai is the appropriate level. 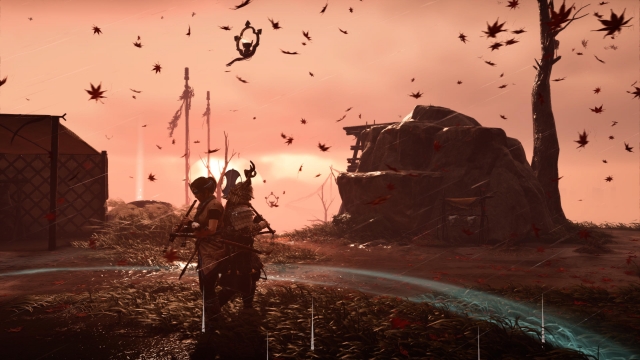 As mentioned previously, there are four fallen samurai spirits you can choose from starting with a free unlock in the beginning and then you can continue to unlock the others as you earn more points to do so. Each samurai is essentially a class with the traditional Samurai being the damage-focused class, Hunter the ranged, Assassin the stealth and Ronin the healing. While the gameplay is essentially the same as the base game, each class has its own abilities and unique items based on their class that makes them all feel semi-different to play, but more importantly, useful to the team. You have a rank level which unlocks more abilities as you progress, but there is also a gear score that you need to increase by earning and upgrading gear you receive from completing missions and challenges within those missions. Yup, that’s right, Ghost of Tsushima: Legends is essentially a looter-slasher and it works better than anyone could have expected. Gear you find will change various aspects of your chosen class including your sword stances, samurai abilities and items you can use in-game, with each gear being coloured based on rarity from common to legendary. While you can earn gear in the story missions, most of your gear grind will come from Legends’ second mode: survival. In survival mode, you and up to three others have to defend three points against waves of Mongols and Oni enemies using your class abilities, samurai skills, and most importantly, communication to succeed. The three points are just large circles that will fill up with red if an enemy is inside while you aren’t; once that point is taken you lose some of your overall health and must wait until a boss round to get the point and your health back. Boss rounds happen every fifth round and get more challenging as you get closer to the end. Similar to the story missions, survival also has difficulty modes which increase the number of rounds there are and the difficulty significantly. Once you get to the gold difficulty, you cannot let any of your teammates die or you will have to restart from the very beginning. There’s also a difficulty above gold appropriately named nightmare for anyone who is looking for that extra challenge, but it’s a huge jump from gold, so make sure you’re ready. Once your grind for gear is over and you’ve made it to the max-level, you can take on what is essentially the finale of Legends: the raid.

The raid is the final part of the Legends mode and is the big finale that was released via an update shortly after Legends came out. Previously, the raid required you to have a full premade team of four to even tackle it, but a later update now allows you to matchmake similar to the story and survival modes. The raid in Legends is split into three sections and is structured similar to the story missions, but done on a much grander scale. The raid is probably the most challenging part of Legends as it demands teamwork and communication, so it's easy to see why Sucker Punch originally wanted you to have a premade team. Similar to other raids in other looter-like games, these missions can last hours so you have to plan accordingly when tackling them. While the first part took me and my crew about two hours, part two and three almost took us five hours each and you can’t stop a mission halfway, so you have to see it to the end. Despite the length, it was an absolute blast trying to figure out what to do and how to do it in the best way possible using our entire arsenals to the best of our abilities. Visually, Legends is a completely different vibe from the base game with its horror-like supernatural setting and the blood-red colour smeared all over the achromatic world making the visuals just pop more so than in the original game, especially in the final raid. Enemies, especially Onis, also have menacing designs and movesets that really bring home that supernatural setting they were going for. The cosmetics for each class are great as well with some interesting enhancements such as sword VFX which allows you to add a special effect to your sword whenever you swing; it’s a small addition, but it looks incredible in combat. Sucker Punch also managed to include a photo mode for this cooperative mode (which can only be used with a premade party) that is somehow better than the base game. Performance-wise, on PlayStation 4 Pro it runs the same as the base game (30FPS at dynamic 4K or 60FPS at 1080p), but if you have a PlayStation 5, it runs at 4K 60FPS and it truly is stunning to look at in motion.

It’s crazy to think that Sucker Punch released a fantastic, well-designed looter game in a time where everyone has been getting it wrong (*cough* Marvel’s Avengers *cough*) and it’s not even the entire game. It’s completely understandable why some people consider Ghost of Tsushima game of the year for 2020. With a FREE DLC like this, it’s hard to argue against it.

Ghost of Tsushima: Legends is a shockingly excellent, cooperative looter-slasher with an incredible visual style that breathes new life into the game to make it feel like a different, yet complete, experience and it's absolutely free.