The Giana Sisters, unbeknownst to me, has a legacy stretching back to the 1980s and the days of big hair, synth music and 2D platformers. And that is exactly what it was, a platforming game often compared in style to Super Mario Bros. Fast forward to 2015, and following a successful KickStarter back in 2012 for Twisted Dreams, the series has once again returned, this time with a new approach. Unlike the platformers that have come before it, Giana Sisters: Dream Runners is a platform racer.

With a focus on multiplayer, the premise for Giana Sisters: Dream Runners is simple. You take control of one of four racers and must keep running, navigating around platforms and obstacles until somebody wins. The winner is declared by either being in the lead at the end of the timer, or by stretching out such an advantage to the extent of knocking your opponents off screen. Across the nine levels are the usual trope of boosts, obstacles and enemies to help or hinder your race; bricks falling from crumbling walls can quickly change a one-sided race into an even battle for glory. 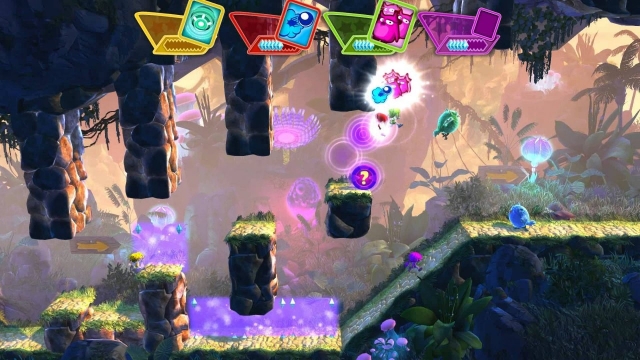 It’s easy to see the influences on Giana Sisters: Dream Runners. Elements from the likes of Mario Kart, Micro Machines, Fusion Frenzy and even LittleBigPlanet are all apparent and that’s no discredit to Black Forest, who have chosen an excellent selection of loved titles to paint the Giana Sisters’ canvas with. But its variety is also Dream Runners’ downfall; it’s very much a jack of all trades, master of none. Elements of speed running and platforming all feel so watered down that it’s difficult to grasp which genre it truly fits into. There’s nothing truly unique about the gameplay, so much so that it’s an easily forgotten game once you’ve put the controller down and turned off the console.

You have to take your hat off to Black Forest though, there is no tutorial per se and lets you crack on with a game from the get go. Other than a few ‘tips and pointers’ during your initial race, it’s pretty much trial and error. Again though, it feels like a more detailed intro to the controls would allow for new players to familiarise themselves with a genre that’s relatively hard to master. It’s a bold move, but one that is rarely well received. Black Forest’s focus on multiplayer is where Giana Sisters: Dream Runners gameplay shines through. It seems the days of local co-op are having something of a renaissance, and the fast-paced race for supremacy that is Dream Runners encourages these multiplayer sessions on the sofa, jostling for victory. While you can play single player, the remaining racers controlled by AI, the drama is barely comparable to that of multiplayer. Playing online is also an option, but I found that the wait for opponents and lack of physical competition made online racing just a more difficult version of single player.

Giana Sisters: Dream Runners has a beautifully designed art style which again, echoes the games which were clearly a huge inspiration to Black Forest has used. The playable characters all feature a distinct, eye-popping colour and are easily recognisable on what can often be a chaotic and wide-angle screen. And when you’re racing for survival with the edge biting at your backside, the bright colours are essential. 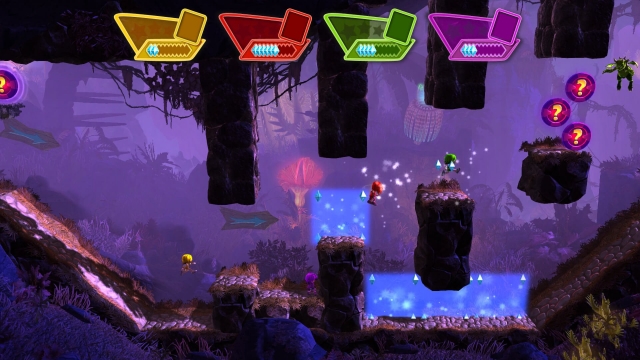 All in all, Giana Sisters: Dream Runners is a very average game, but is ramped up and much more enjoyable when playing together with friends. The ‘run for your life’ mentality of the game means that races, while rarely one-sided,  are tense and enjoyable regardless of the outcome. It does fall short a peg or two, without really fully offering a solid version of a runner or a platformer, the two barely propping each other up as a solid genre. It might not be entirely innovative, but if you’re looking for a new party game to entertain your friends, you’re in the right place.

Giana Sisters: Dream Runners is the ideal party game, but falls short of being a must have offering nothing more than a watered down version of a number of genres.