Simulators have somewhat become the laughing stock of Steam games, with their low quality graphics and incredibly buggy gameplay. I’ve played a lot of these simulators - I’d consider myself a connoisseur if I was proud of that - so when it came to reviewing Giant Machines 2017 I jumped at the opportunity, and I was incredibly surprised.

Giant Machines 2017 is - as with most simulators - very self-descriptive: You control the second-to-last man alive, and you are tasked with controlling some of the world’s biggest machines in order to prepare a shuttle launch. I say second-to-last man alive because you have to do basically everything, and the world is otherwise completely empty. This is probably a good thing: there’s only a few occasions where NPCs would make sense and in my experience adding random moving obstacles is the easiest way to ping your player into space.

The other person in the world is Giant Machines’ narrator, who tells you what you have to do at various points. He’s your tutor, your guide, and I reckon he steals the spotlight after breaking your back throughout the 15 missions and is on that shuttle. It’s not told in the game, but that’s my headcanon. He only talks to you through pop-ups - which are dictated to you by a Mid-Western sounding gentleman - and these pause the gameplay completely. This can be quite jarring when using the faster vehicles, though the bigger machines move so slowly it’s basically unnoticeable. 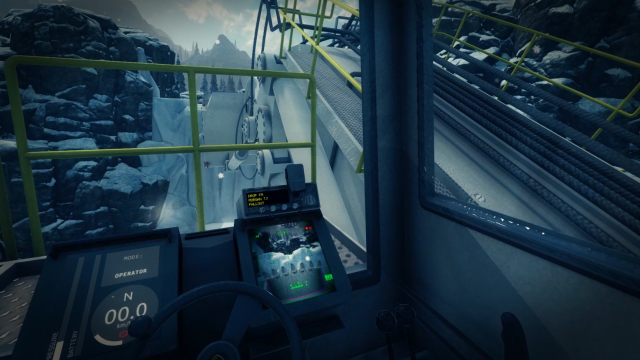 The real drivers of these vehicles must not be able to see anything!

Giant Machines 2017 was - for me at least - not a buggy mess, with all the vehicles and physics acting how I’d expect them to. This even applied to a scene that I fully expected to be completely messed up, where you control a portable crane and you have to move physics objects from one place to another. Those scenes ran perfectly fine though, and I can’t say I was disappointed even though half the fun of simulators is trying to break them.

I think this is partly down to the story Giant Machines uses to explain why you’re using these frankly enormous machines. From the very beginning, the game makes it clear that you’re building up to launching a space shuttle, and god-dammit if I didn’t instantly become a little boy wanting to use the big-ass machines to make a space shuttle.

The sheer size of the machines you use in this game is incredible: you really feel it in the very first mission when you switch from the little buggy that takes you from the spawn to the bucket wheel excavator, a machine that wouldn’t fit on a football field. The tracks are taller than you are by quite a margin, and you have to climb 100 metres to reach the top of it - which is something you actually have to do. It takes a long time as you’d expect, and that’s a recurring theme throughout the game. The fastest machines are the little buggy and the dumper truck, which still only go about 40kph. Everything else is slow, with the larger machines being able to reach only about 10kph when they’re not loaded. The crawler, when loaded with a space shuttle, hits a massive 5kph - eventually. This makes it a little tedious at times, but Giant Machines does it’s best to not become Desert Bus Simulator and gives you something interesting to do.

Some of these are a bit unusual though, with a random snow clearing level and two levels where you have to escape from tornadoes. I know that tornadoes are much more common in America than they are over here in England, but twice in one week? It adds a little excitement to the gameplay the first time, but the second time it’s just a chore and I was much more careless with my driving. This was a mistake, as I found the four wheeled vehicles to be exceptionally floaty and controlling them while turning at speed felt like a significantly smaller and lighter vehicle.

There are several camera options once in the vehicles, from the detailed cockpit view which includes all the appropriate levers, buttons and switches all of which animate when you press their corresponding commands, to several exterior views that allow you to get a good view of every function that your vehicle does. You also have the option to view the controls of the machines you’re using by pushing control at any time, and this is very useful for some of the more complex vehicles like the cranes which have a lot of moving parts. 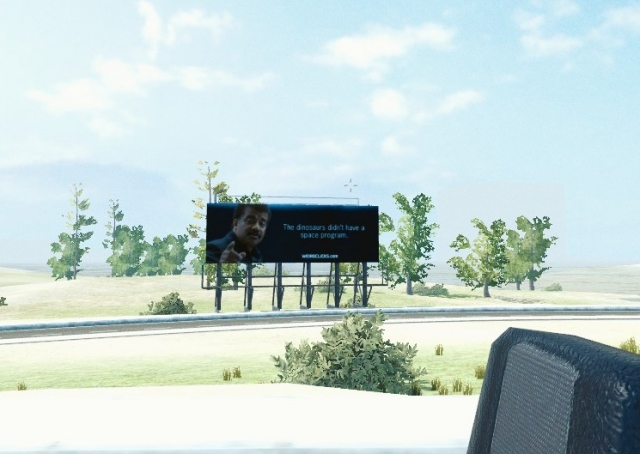 The NASA might be fake, but Neil deGrasse Tyson is real in every universe

Graphically, it looks pretty much exactly like most simulators: the textures are kinda plain and it’s trying for realism but misses the mark by some margin. The machines all look very detailed, but the art style is rather boring and uninventive and the textures blur quite obviously in the distance. There’s a lot of attention to detail with the world building, with the tornado levels being littered by wrecked lorries and damaged buildings but everything just looks very plain.

Giant Machines has a radio system for whenever you’re in a vehicle, and some of the songs are actually pretty good. There’s a nice selection of stations that are themed to the genre, and I found myself switching between the rock and the jazz stations to avoid repetition as there aren’t that many songs on each station. I didn’t recognise many of the songs, but there are definitely licensed songs in there because Skankshot’s Brain Eating Zombies from Area 51 features on the rock channel.

As someone used to simulators, I have to say this is the most playable one I’ve seen for a long time that isn’t just a sequel. There’s little mechanically wrong with it, and the sense of scale that it achieves is very impressive. I really enjoyed the in-game radio and that there was a form of story progression to most of the random activities together. Ultimately though it is let down by how tedious some of the missions can be and how plain it looks, and although it is relatively short there wasn’t a lot that made me excited to continue playing after the novelty of driving these huge machines wore off.

A very competent albeit plain simulator once the novelty of the scale wears off.