It has been a long time since I’ve played in an arcade. By arcade I’m talking about convincing your mum to drive you 20 minutes to a dimly-lit building that smells like a sweaty fat guy just took his socks off. However, the reason we did this every weekend wasn’t for the pencil topper we needed 2000 tickets to redeem from behind the counter. It was for the atmosphere, a bunch of strangers cruelly judging you and simultaneously cheering you on, while you mash a ball attached to the end of a stick in multiple different directions until you reach the highest number of the day and develop carpal tunnel syndrome. It was a joyous experience. But if you take away that ambiance and everything that comes with it, what’s left? With that in mind, let me talk about Glow.

Glow is a game that fills me with nostalgia of that forgotten era in gaming. You play a laser beam-wielding firefly that has to kill laser beam-wielding spiders You kill as many of the said spiders until you complete the level. As you progress through the levels, and rack up points, you unlock abilities and other weapons... That’s it. No text-based story, no co-op mode, no difference in play style, and other than the increase in score and level number there’s no satisfying feeling of accomplishment. Just you, laser beams, and spiders. 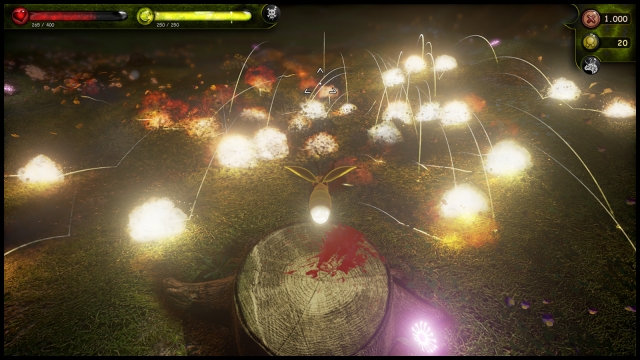 Ok, I will admit that for a simple arcade game, the lighting given off by the arachnid-hating firefly realistically portrays the changing shape, size, and direction of the shadows cast by the light, as well as the range of illumination you give off. For a long while I didn’t even want to complete the level. I simply flew around and looked at the beautiful scenery. The lovely glow given off by certain flowers was hypnotizing. Not to mention the general lighting was dark but with a calming late summer evening feel. I found myself lost in this magnificently simplistic world, which was broken up by the shooting of lasers. Clearly, Glow is a modern take on old school side-scrolling shooters. Show Glow next to Space Invaders and there won't be a comparison. In the end though, it is still just an arcade game. You can find countless of them all over steam and many platforms.

The controls for Glow are fairly clumsy. You have your standard WASD movement controls, and an aim cursor that you control with your mouse, but you only move the cursor up and down. For games likes these I pride myself on being able to shoot multiple different enemies at different spots on the screen without changing camera angle. I’m used to moving my eyes to where I want the cursor to be. With Glow I’m moving the whole screen which feels incredibly disorienting. I understand that they are trying to bring a 3-D platform to a 2-D play style and it could be because I am not a fan of this genre. But this simple movement control just caused me to yell at my screen. 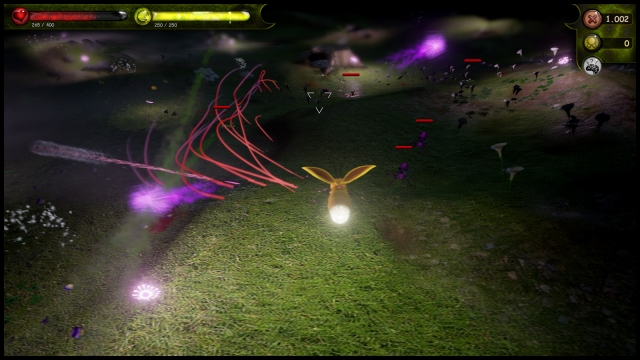 Out of curiosity I looked at the leaderboard to see where I placed in my bit of time and who the highest was. I amassed a score of 2,100 and placed 41st, but the #1 spot was over 3.8 million. I would be impressed if I had forgotten that there are hackers out there whose sole purpose in life is to enter in the highest possible number they can so they can say “HEY LOOK AT ME!” Even if that isn’t the case here it just makes me very sad that someone put this much time into this game.

Glow is an arcade game that has clumsy controls, mind-numbing repetitive gameplay, and a high score no sane human would try to beat. Though I can see how if you’re a classic arcade gamer who isn’t able to head to Twin Galaxies every weekend Glow might just be for you. But for a story focused gamer like myself it just feels very lacking.

A game with a beautiful landscape and effects, but the clumsy controls, repetitive game play and lack luster rewarding system leaves much to be desired.