Take charge and grab life by the… bottle? Grab The Bottle is simply that, the player takes control of an arm, which can only belong to Stretch Armstrong, and solve the puzzle in order to take hold of the bottle and proceed to the next level.

Jumping straight out of a pop art book, Grab The Bottle is colourful and vibrant, and while not the most graphically detailed title, this puzzler has style. Accompanying the visuals is a chilled out soundtrack that, while becoming repetitive when restarting levels (and this will happen often), more tracks are introduced to the player as they progress.

The story is an unexpected pleasant addition, following the life of man from infant to an elderly man. Between levels are short comic book style frames, which display significant moments in the protagonist's life and the bottle the player is attempting to collect reflects this. From baby bottle to a chilled bottle of beer as the child grows into a man. 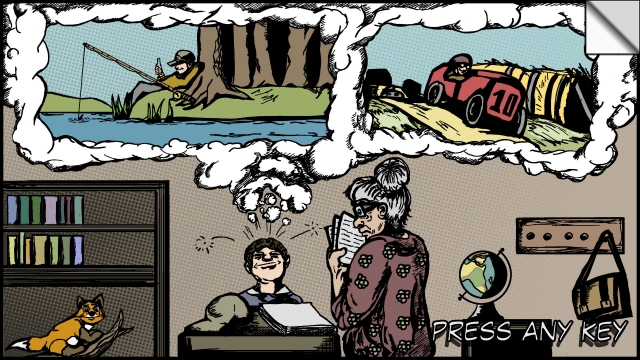 The gameplay consists of stretching a disembodied arm across the level, controlling similar to how Snake does. Instead of growing longer when collecting items this arm continually grows as it moves, forcing the player to make quick decisions, avoid obstacles and solve the puzzle all at the same time. Touching obstacles will cause the arm to retract a short distance and become bruised and swollen, a secondary touch will force the arm to retract completely and make the player retry the level.

In order to complete levels, the player must first gather all collectables, ranging from baby pacifiers in the early levels to bottle openers in the later levels. To do this the player is sometimes required to interact with the environment, be it a handle for a door or an object that the player can pick up. Once an object is picked up, the arm will begin to retract, this makes planning and forethought central to the gameplay as these objects will be needed in combination with an obstacle and there is no moving forward while holding an object. For example, one level required me to drop a bomb onto a hatch, to do this I first needed to move the arm over the hatch, then retrieve the bomb and then retract the arm back to the hatch, drop the bomb and then proceed to the next task.

Puzzles can be described as single solution, meaning there is only one way to complete a level and that is to perform each task in a set sequence. This means a degree of trial and error is required to learn which task needs to be performed first. Each task requires a high level of precision, with a wide turning arc the hand has very little mobility to navigate through tight areas. I would often find myself failing a mission and retrying over and over just to fit through the same small hole. While other titles such as Super Meatboy require high levels of precision, there are times that the player may get past an obstacle better than the last attempt, resulting in a degree of satisfaction, in Grab The Bottle there is no room for error whatsoever. 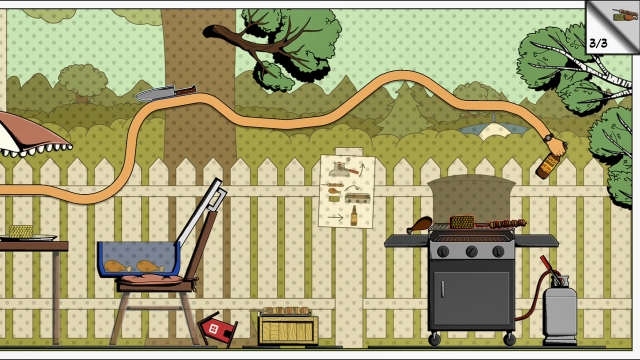 Tasks quickly become repetitive from level to level, maneuver between a narrow space, pick up object, drop object on obstacle, rinse and repeat. The game relies on a physics engine, meaning that occasionally dropping an object to move an obstacle might cause the obstacle to block the path instead of open it, meaning a restart will be required to try again. The game will offer the player a crutch on multiple failures in the form or either a boxing glove that will make the player invulnerable or add numbers to each object to display which order they must be used in. While this is helpful it does little to prevent the repetitiveness of each level.

20 levels into Grab The Bottle and the game threw a curveball at me, instead of the usual puzzle solver I was required to chase a bird that had stolen my bottle from the previous level. Racing after the bird at high speeds with my stretchy arm, weaving in and out of tree branches, dodging birds and balloons was the most fun I had with Grab The Bottle. Unfortunately once completed the next level returned to the mundane puzzle solver that has left me unimpressed and frustrated.

Grab The Bottle has style and that unfortunately is all it has to offer. The puzzles boil down to retry after retry, until finally succeeding and being rewarded with another level of repetitiveness. The mechanics do not vary enough to be engaging and the story is not present enough to keep the attention of the player.

Grab the Bottle (Reviewed on Windows)

Grab The Bottle has style and that unfortunately is all it has to offer. The puzzles boil down to retry after retry, until finally succeeding and being rewarded with another level of repetitiveness. The mechanics do not vary enough to be engaging and the story is not present enough to keep the attention of the player.