If you were flying blind going into your time with Grand Ages: Medieval, you might be forgiven for thinking that this game would turn out to be a Total War-a-like. Indeed, the preview pictures feature a number of sumptuous shots of medieval towns and armies marching to battle. That’s not the case, though. Yes there are battles, armies and shiny-looking villages but this title is all about the power of trade and commerce in medieval Europe.

Developed by Gaming Minds, the game is an economy simulator at its heart. You take control of a merchant operating in a European town and set about building your empire through the means of supply and demand. The game does dabble in combat, strategy and exploration, too, but only momentarily, before dragging you back into the world of trade routes and currency exchange.

Grand Ages: Medieval, to give it its due, does a good job of introducing you to the basic mechanics. The single player campaign revolves around a noble family from the ailing Byzantine Empire in 1050 and serves as your main tutorial and proof of concept. There is some narrative there as well and it offers a decent amount of twists, but never more than enough to keep the player coming back to the campaign once they’ve got the grasp of the mechanics. 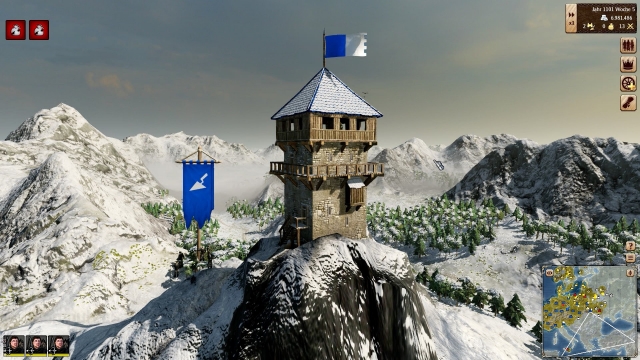 Starting a sandbox game presents you with the wide open space of Europe in which to start your adventure. At the beginning you have one merchant, one town and one scout. Players will need to explore to discover neutral towns and the major trading players in the continent. Trade carts can be managed, as well as their cargo, but the game provides some good tools for creating routes that can pass through most of your target cities on the way.

Neutral towns that you discover can be won over to your cause over time if you exchange enough resources with them or bribe them with enough cash. If bribery and expansion into pre-determined routes aren’t your thing, the player also has the option to send out settlers to create their own villages and towns. This can be a useful tool to reach resources and commodities that your trade empire lacks. You’ll also receive an extra merchant for every town you take over.

There’s a tech tree, too, which opens up upgrades for your towns that can increase your prosperity, upgrade your units and generally improve your efficiency.

Manipulating the market is where Grand Ages: Medieval comes into its own. Trade and demand are simulated well, and there is a certain satisfaction that can be had when you flood the market with cheap pottery and watch your rival’s flourishing network wither and die as people flock to your empire. 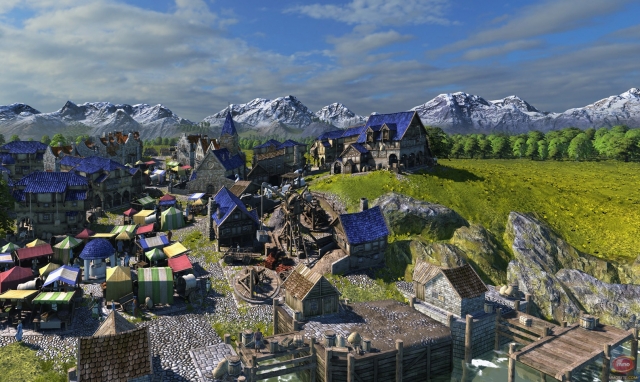 The game’s interface makes it relatively easy to switch between income, expenditure and other vital information. The player will never be flustered trying to find their stats, and, with the financials being so integral to the game, it’s no wonder Gaming Minds have ensured that it’s easy to see what is going where.

As you expand you’re bound to come across rivals and enemies who will vie for trade domination of Europe. Combat in the game, however, lacks any real depth. There are multiple different units you can recruit and deploy – all of which operate under the familiar rock-paper-scissors system that RTS fans will know well. Despite this system, though, it’s often the side with the largest army that wins.

As someone who is a massive fan of combat-orientated strategy games, the fact that once you have a burgeoning treasury there’s actually very little to do left me somewhat bored. Grand Ages: Medieval, though distinctly of Crusader Kings and Total War style, seems more like an intricate 4X version of Civilization much of the time. The problem is that the combat in Civilization is probably more satisfying. 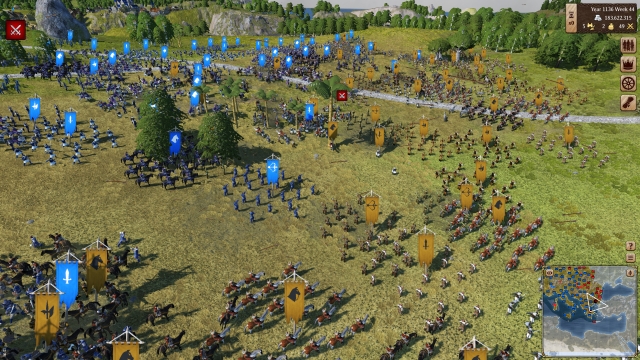 Graphically the game won’t win any prizes but does the job with impeccable efficiency. The overworld map of Europe can at times look gorgeous, especially when it’s bustling with your trade caravans. The towns and cities can look very quaint and pretty, especially those surrounded by mountains, forests and lakes. The armies and soldiers are detailed, and remind me slightly of units in Age of Empires III. The game’s music and sound never inspire, but never exactly disappoint, either. Much like many aspects of the game they are middling at best.

Grand Ages: Medieval can be thought of as an acquired taste (much like the fine wine I peddled around my Alpine trade routes). The mechanics are intuitive and work well, allowing players to get to grips with them and excel with enough practice and micromanagement. The game’s simplistic combat and relative lack of variety will probably mean very few come back to it after their first foray. Yet, if you’re looking for something more relaxing when it comes to your 4X strategy, this game might be for you.

Grand Ages: Medieval can be thought of as an acquired taste (much like the fine wine I peddled around my Alpine trade routes). If you’re looking for something more relaxing when it comes to your 4X strategy, this game might be for you. 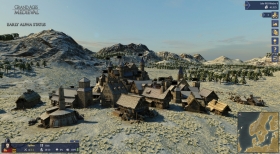