Grand Theft Auto V has been out for over a year at this point and let me tell you straight: It’s only better on Xbox One and PS4. Everything that was great about last year’s largest release is still here but at a better framerate, a more impressive resolution and with a bunch of extra touches to the game allowing it to be what it was always meant to be: a true masterpiece.

The chances are, you’ve played GTA V by now and you know pretty much everything about it. If you haven’t then check out our original review here. But let me explain why you should buy it again. With added density of traffic, people, animals and foliage every thing about Los Santos feels more alive. The much more stable framerate brings a better overall experience and allows aspects of the gameplay that already shined a year ago to really show off. Because of this, even the most mundane tasks feel rewarding and a pleasure to take part in. A special word must go out to the driving. Vehicle handling is second to none. I played The Crew recently and the driving in that game felt awkward and heavy in comparison to GTA V. Just cruising is a joy, the thrill of driving around the world Rockstar has created is something to behold. Very few racing games manage to capture the rewarding feel of driving, let alone a game with so many other aspects. Every time you pull off a perfect overtake of a car while going at ridiculous speed gives you such a sense of satisfaction that you’ll want to do it again just for that feeling.

Shooting is next on the list. Auto aim is still prevalent but, because you can sometimes be just overwhelmed by the number of enemies, it’s a welcome gift. The range of guns, accessories and overall customisation is great. Shotguns, assault rifles, pistols, RPG’s you name it it’s here, and each feels meaty when they connect with their target. The new first-person mode does change up both of the above to the extent that it feels like a completely new game. Shooting feels like you would expect any modern FPS to feel and driving feels more like you’re actually driving and not just temporarily inhabiting the body of the car before being transferred back to your chosen character. This set’s GTA V apart from other games in and outside its genre even more than before by taking not only what it’s good at, but what other games are good at and making them fit within its boundaries.

It never feels jarring to change into the mode either, it’s always a smooth experience. If there is a theme here, it’s smooth and simple. It can still take a little longer than desirable to jump from character to character but this is a minor complaint when you consider the size of the world and number of activities within it. Want to hijack a plane, parachute out of it, land on a mountain, steal a bike, ride down the mountain to a lake, swim from one side to the other, steal a car, rob a convenience store and escape the police response while listening to All Saints - Pure Shores and Mis-Teeq - Scandalous? Well, you can. The great story and characters are still here and it feels just fantastic to experience the story of three misfits who come together to make money in a number of increasingly ludicrous and hilarious ways. It cannot be understated how well paced Grand Theft Auto V’s story is. Highlights are the heists, as they were a year ago, but a special mention goes out to every Trevor mission in the game. As GTA protagonists go Trevor is the only one so far that overcomes the ludonarrative argument and gives the player complete free reign and no sense of consequence. I feel like there will never be a main character in a GTA game again so perfectly fitted to this series that allows players to really immerse themselves in the chaos you can cause.

Multiplayer, not being the mess it was on release, is now an extreme pleasure to play. Unfortunately, we still do not have heists, but what we do have are many, many game modes with a huge array of interesting ideas being constantly added by Rockstar with community jobs. The new larger games also allow chaos on a scale unseen before in public free roam. With the ability unlocked for you to pretty much do everything you could in single player with your freinds, GTA Online is pretty much a second game for the price of the original, and it’s almost everything promised before launch. 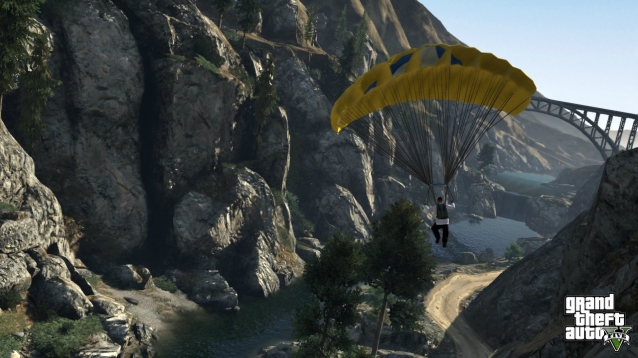 It’s very rare in today’s gaming scene that we get a chance to play a game more than once through. This gives you the chance to play one of the best games ever made, again. A chance to experience fantastic gameplay, hilarious and intelligent social commentary and a fantastic story full of characters with vibrant personalities that fit perfectly into a fascinating world. This is an opportunity you should take with both hands. This is the definitive version of a masterpiece.

It’s very rare in today’s gaming scene that we get a chance to play a game more than once through. This gives you the chance to play one of the best games ever made, again. A chance to experience fantastic gameplay, hilarious and intelligent social commentary and a fantastic story full of characters with vibrant personalities that fit perfectly into a fascinating world. This is an opportunity you should take with both hands. This is the definitive version of a masterpiece.

This game was supplied by the publisher or relevant PR company for the purposes of review
Have you bought GTA again? Will you now? Let us know below!

I played through the entire campaign on last-gen, can't bring myself to buy it to do the same again. Too many games out currently, would maybe have a stab at it when the price comes down.