They say that beauty is in the eye of the beholder, and that certainly applied when I first met my partner. She was wearing a pretty loud outfit; bright green it was. When I say bright, I mean fluorescent, but nonetheless, she looked stunning to me. The same could be said of Graveyard Keeper, with its old school pixellated art style that’s so divisive. I really like it, and that juxtaposition of low-res cuteness with skulls, gravestones and dead bodies appealed to me from the get-go. It was inevitable I was going to review this game.

You play as the titular keeper of the graveyard, although it’s not a job you applied for. You start the game by waking up unexpectedly in this strange medieval land, with only a disembodied skull for company, who serves as your guide throughout. You’ll be managing the day-to day activities of the cemetery such as burying bodies, arranging cremations, and extracting flesh to be sold as cheap meat to the local innkeeper. Yes, that did indeed escalate quickly. Just like my relationship with the aforementioned partner who wore an even louder outfit to our first date. More on that later though. We’re here to talk about a videogame.

Don’t let the cutesy stylings fool you: this is a much more in-depth game than you might expect. It’s quite similar to games like Harvest Moon or Stardew Valley, but with a darker sense of humour injected into it like formaldehyde into a cadaver destined for open-casket burial. The activities of the graveyard, whilst important to the game, are actually not what you’ll spend most of your time doing. Instead they serve as the backdrop to a game with quite a number of facets. 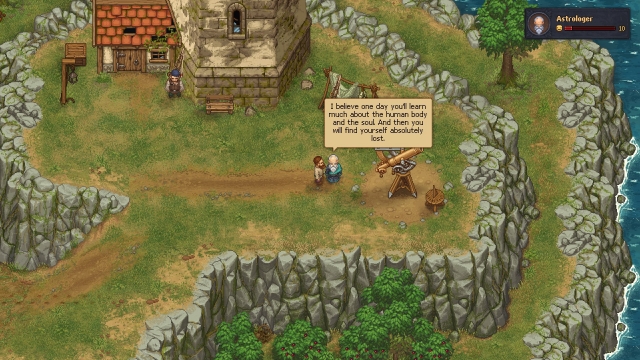 Your main time in game will be spent trying to fulfill quests that the villagers and townsfolk all have for you. There’s a long and complex series of skill trees in things like smithing, forestry and fishing, and you’ll need to be earning upgrade points in all of these to work your way through the quests and follow the story of the game. Many characters only appear on certain days of the week, and there’s no way to skip a day, so you’ll find yourself spending an awful lot of time killing time by doing things that aren’t graveyard related such as collecting wood and sleeping.

This is possibly just as well however, because sleeping restores your energy, and for the first part of the game, you’ll be running out of energy a lot. You know how in Stardew Valley, you start off always out of energy by lunchtime so you spend the evening talking to the village inhabitants? Imagine that, but harsher, and with very little to do in the evening because everybody’s gone to bed. I honestly found myself sleeping two or three times a day in the early game. Sleeping advances time a little quicker, but it doesn’t skip to the next day, so I was often waking up in the dark and squinting to see what I was doing in the darker parts of the map. This wasn’t helped by the fact that the map screen doesn’t show your location on it, so you have to work out where you are by relation to landmarks. 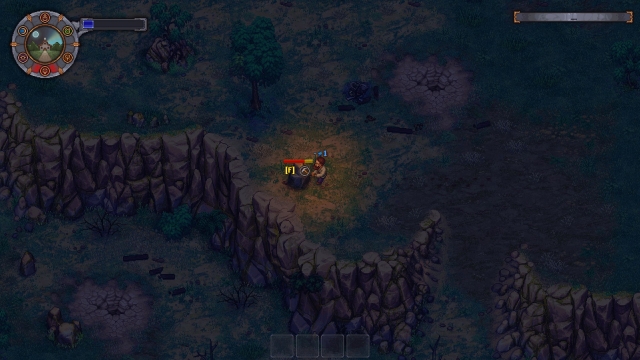 Eventually, you’ll be able to cook well enough to keep your energy levels up, but you’ll still be left with the issue of waiting times for characters that will help you to advance the story. If you’ve got a few quests on the go at once, it isn’t quite so bad, but as you start tackling some of the larger quests, you’ll come up against a lot of dead time that is a little bit more difficult to fill than in some of the more popular farming style games.

That’s not to say that there isn’t plenty to do though, it’s just not as evenly spread out as it could be. It doesn’t help that there’s no quest log like you might expect. There’s a list of known NPCs which will give you a quick rundown if any of them have quests for you, but it’s very minimal. It’s these little niggles which chip away at Graveyard Keeper and stop it from being a great game. It feels a bit like a title that’s still in early access. Hopefully a few more patches and the little niggles will be resolved, as they aren’t game-breakers in themselves. 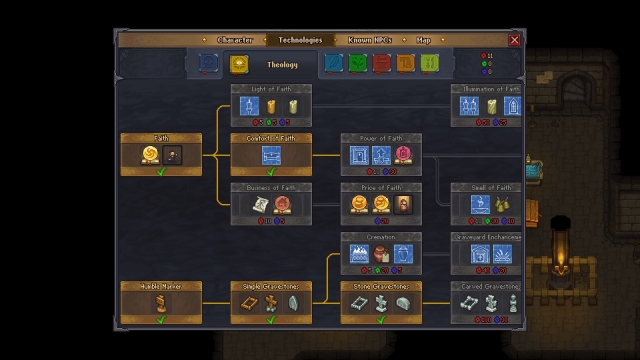 It might not sound like it from the above, but I genuinely did like this game. At its core, there’s a really solid and well thought out little micromanagement game with a lot of fun touches. There’s plenty of stuff to do, even if it does often come in clumps, and I sank a lot of hours into it before writing this review. It’s not the best game in its class, but it’s certainly doing a very good job, and the setting is one that’s original enough to make it stand out in the crowd.

At the end of the day, you can always forgive a few issues when you’ve had a good time playing a game and that applies here. I enjoyed Graveyard Keeper and I’ll be persevering with it after this review despite its flaws. Very much like I enjoyed the second date with my partner, despite another unusual outfit. For that date, she had an even louder number on, with football boots and big gloves. That was when I knew she was a keeper. A solid and fun little farming type sim, but one that has a few issues. Although it’s a bit rough around the edges, it’s still worth a look.