Grimvalor from Direlight Games is a side-scrolling platformer that is heavily inspired by the Dark Souls franchise despite playing like a much faster version of it. While the story is rather thin, Grimvalor offers enjoyable, challenging gameplay that doesn’t fully embrace the Dark Souls punishment style but is still great regardless of that.

Grimvalor takes place in the lost kingdom of Vallaris where all kinds of monstrosities have overrun the kingdom and begun to seep out into the world. As neighbouring kingdoms discovered this news, they began to send warriors (like yourself) to discover the fate of Vallaris’ lost king. But you discover you can’t proceed with your task without repairing the broken Nexus you have found. Grimvalor begins here with a choice of gender for your hero as you get dropped into the tutorial to learn the controls, which are easy to grasp. Other than that, that’s really all you get of the story unless you discover more information from books you can find as you explore. 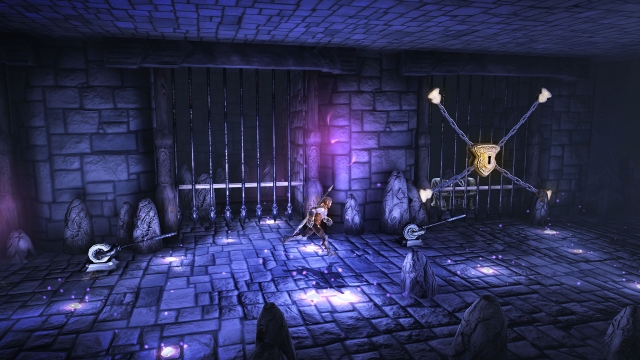 The world itself feels very Dark Souls-esque as the majority of Grimvalor takes place within a run-down castle. In each of the five acts, you’ll proceed deeper into the castle as each part is broken down into rooms on the map. The Nexus you’re trying to repair acts as a base where you can fast travel to different sections or acquire upgrades, but will only be activated if you find the right room. Some rooms may have treasure in them and you’ll know if they do with the completion indicator on the map to show the percentage of treasures you’ve collected within that room. The treasure you find are mainly shards which can be used for upgrades, but sometimes they are lore pieces such as the books mentioned earlier.

Grimvalor plays like a fast-paced hack-n-slash, contrasting the slow, meticulous gameplay you'd find in the Dark Souls series. You have a light and charged attack along with a jump and unlimited dash/dodge which makes navigating the castle quick and fun. Light attacks focus on speed and critical damage while charged focuses on heavy damage and stuns; both are crucial in combat especially for the boss-like enemies which this game has quite a few of. There are other abilities you can learn such as a slam and launch attack, but you’ll have to find them and defeat the guardian keeping it hostage. Killing enemies rewards you with soul shards which can be used to level up at shrines or to buy trinkets at the shopkeeper you meet early in the game. 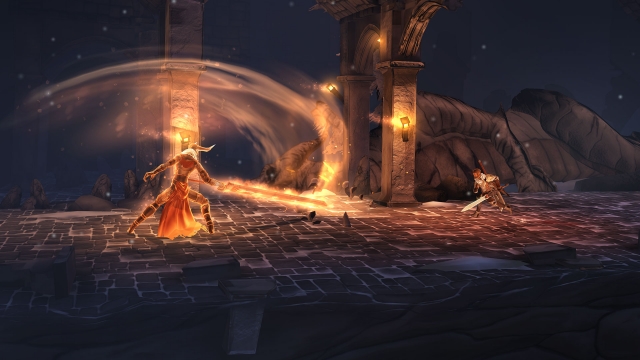 Shrines are very similar to Dark Souls as they heal you, replenish your potions, act as checkpoints and bring enemies you’ve previously killed back from the dead. You can also use them to level up if you have the required amount of soul shards which raises every time. You get three skill points when you level up which you can use on Vigor (health), Savagery (damage), Mastery (speed/crit) or Focus (trinket slots). Trinkets improve upon your abilities giving them some extra flair such as slow-motion when performing a dodge or a shockwave when performing a slam. As mentioned previously, you can also find shards that act as treasure which can be used at the forge to upgrade your light and charged weapon along with armor upgrades if you have the funds.

All the upgrades and weapons you retrieve throughout Grimvalor feel useful and make the gameplay even more engaging/fast-paced which makes fighting the surprisingly large variety of enemies all the more fun. Some enemies feel a little overpowered especially towards the last couple acts, but the majority of them you’ll run right through or have a good challenge with. While there is some repetition between the boss fights, whenever you do see a similar boss, they change things up a bit to try and throw you off your game and it works. You might destroy a boss the first time you see him, but the next time he might change his patterns slightly causing you to miss that dodge and get whacked. The Dark Souls inspiration is also in full-force here as the dying screens and victory screens are just blatant copies. 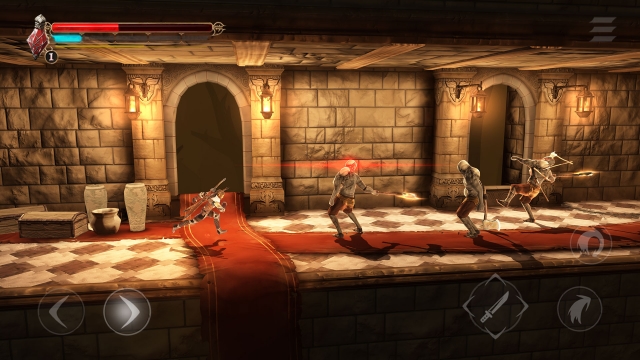 Though there are many aspects of Grimvalor that are inspired by Dark Souls, the one that is most important to the Dark Souls franchise is absent: the punishing gameplay. While Grimvalor can be challenging, it definitely isn’t punishing. Nothing will happen to you if you die or fall off the map. You won’t lose soul shards, health or even start back from the beginning because there are multiple shrines you can find in an act. This can be a bad thing or a good thing for you depending on if you love or hate the Dark Souls series, I’m definitely in the latter on this one so I enjoyed the lack of punishment.

The visuals for Grimvalor aren’t jaw-dropping, but considering it was originally released on smartphones back in 2018, it looks great for what it is. A lot of the areas look relatively the same especially at the speeds you go through them, but again, for a mobile game, it’s pretty impressive. It also helps that it runs at a smooth 60FPS with very little frame drops making the movement feel very responsive which is key for a game like this. There is also a new game+ mode for those who just can’t get enough that offers new equipment, harder enemies and even more bosses. Grimvalor is a side-scrolling platformer for people who love the challenge that the Dark Souls series entails, but hate the punishing gameplay that comes along with it. Despite its lacklustre story, the gameplay is fast, fluid and constantly evolving to keep things engaging until the very end.

Grimvalor is a side-scrolling platformer for people who love the challenge that the Dark Souls series entails, but hate the punishing gameplay that comes along with it. Despite its lacklustre story, the gameplay is fast, fluid and constantly evolving to keep things engaging until the very end.

Grimvalor Graduates from Mobile to Switch