Guild Wars 2: Path of Fire is ArenaNet’s second expansion for 2012's original MMO release. 2015's Heart of Thorns expansion took us to the jungle-laden heart of Meguuma, this time Path of Fire takes you south to the Crystal Desert and the kingdom of Elona as you try to track down and face the god of war, Balthazar. 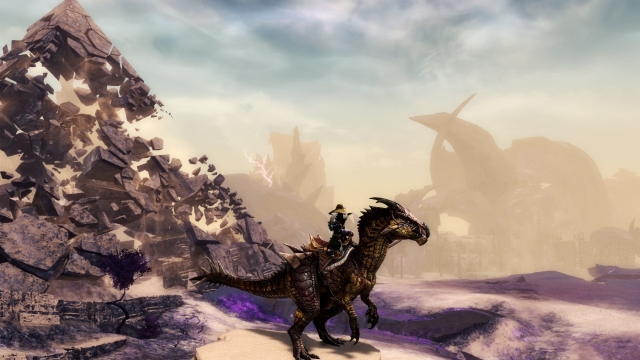 The main headline feature of this new expansion are the mounts, they’ve finally been added to the game after players requesting them for years and they are implemented really well here. There are four mounts that you can acquire as you adventure through the new areas, along with a fifth attainable via other means. Each of the main mount types, the Raptor, the Springer, the Skimmer and the Jackal, all have unique movement and combat abilities. From the Raptor’s long jumping to the Jackal’s blink-like teleporting, they feel much more unique and interesting than the usual speed boost that mounts tend to give in MMOs.

Mounts are where you’ll spend your earned experience as you progress as once again Path of Fire keeps the level cap at 80, utilising the Mastery system introduced in Heart of Thorns to improve your mount's abilities. You can make them leap further, jump higher or enable them to pass through mysterious sand-like portals making leveling up your mounts feel actually significant. Oh and did I mention you can dye them!?

The way the new areas are laid out means you’ll constantly be seeing things you can’t quite reach, which leads to an almost metroidvania approach in their design. As you unlock mounts it enables you to revisit prior areas and finally grab that collectable you couldn’t see an obvious way to before. Some areas even require use of multiple mount abilities to get to which makes solving these environmental puzzles quite satisfying when you piece them together. 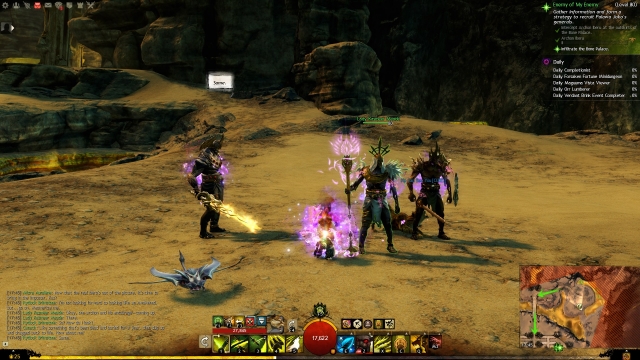 Speaking of new areas, the expansion includes five areas from around the Crystal Desert and Elonian region of the world map, all of which will bring back a certain level of nostalgia for long term Guild Wars fans. Each area is huge with a unique look and feel, avoiding the potential trap that a desert expansion might have fallen victim to, from arid salt flats-esque areas to majestic crystalline formations caused by the Elder Dragon Kralkatorrik “branding” the surroundings, there is a lot of gorgeous scenery to take in.

Path of Fire takes place after the events of Living World Season 3 with the player following the disgraced God of War, Balthazar, to the Crystal Desert as they attempt to stop him from killing the Elder Crystal Dragon, Kralkatorrik. If allowed to continue he would be able to absorb its power whilst also putting Tyria itself at risk.

The plot is well written, with some excellent dialogue from the characters as well as some deft weaving of threads as it keeps the quite dense plot ticking along without getting too bogged down in exposition. The return of undead lich Palawa Joko is handled with aplomb, acting as a shadowy puppet-master figure in the background compared to the more front and centre plot figures of Balthazar and Kralkatorrik. 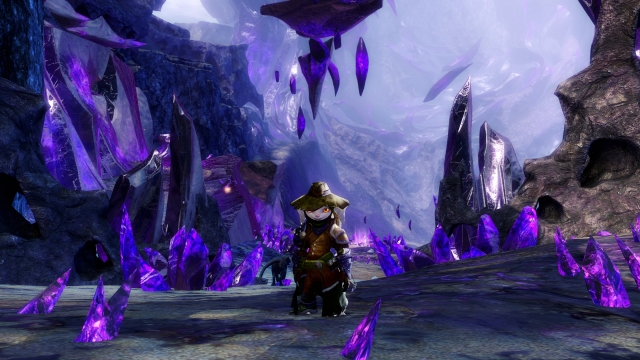 It does however expect you to have kept up with characters and events. Whilst the general gist of the story is straightforward “Bad Guy wants to Kill X to do Y” and is easy enough to follow even with no other Guild Wars knowledge, the minutiae of the dialogue and character interactions expect familiarity with who these people are and the events of the Living World seasons and the prior expansion Heart of Thorns. This is perhaps to be expected as Guild Wars 2 is a live game with a continuously evolving story, it could be a little confusing if you’re coming back into the game after a break or similar though so is worth mentioning.

For those who love the game’s lore however, there is a lot to enjoy in this expansion, from subtle character references to revisiting areas not seen since the original Guild Wars and its Nightfall expansion. The care and love taken with seemingly simple bits of one-off dialogue or environmental detail shows the studio has a reverence for the world they’ve created and rightfully takes pride in rewarding players who’ve been with them for the long haul without detracting from the experience for newcomers. 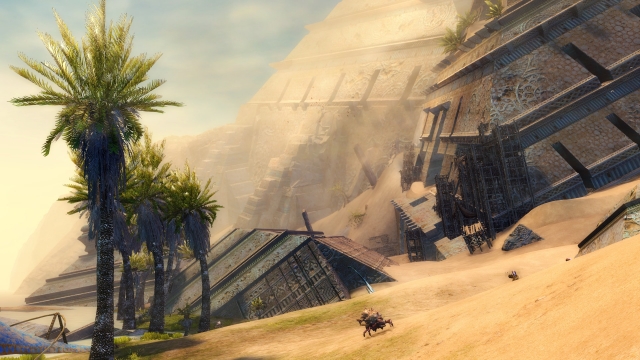 The games story is told over a dozen missions and is paced well. It ultimately leads to an exceptionally satisfying end that caps off the expansion well whilst setting up the events for the next Living World season. The tasks you accomplish in the new zones are mostly excellent with them doing a good job of filling in the details of the world subtly and through play, escorting refugees through hostile regions helps illustrate the plight of the populace far more than just being told things are bad.

Meta-events return although without feeling as intrusive as the ones from Heart of Thorns, which often felt like you had to stop what you were doing to take part, these act basically like dynamic event chains, feeding into each other telling a zone-wide story. For example, in the Elon Riverlands, The Path of Ascension meta-event sees you assisting Kaidenna as she attempts to unseal Augury Rock. The events take you around the area attacking enemies and collecting items before finally giving temporary access to the area. Most ultimately end with a boss fight of some description and a chest of goodies giving a satisfying conclusion to sticking with the events to the end.

Smaller event chains are also common with events often picking up where the previous ones ended, combined with the tasks performed at the now familiar Renown Heart locations (which act as focal points to guide the player into events) there is always something for the player to be doing. 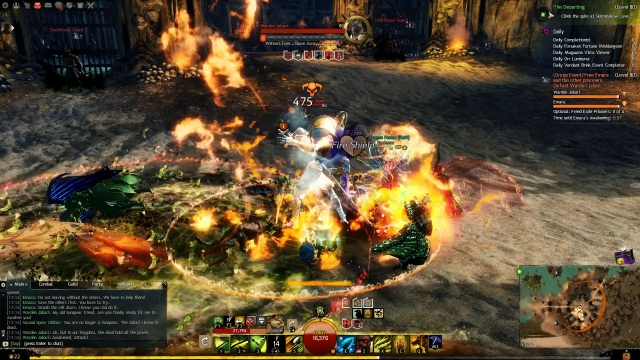 Each of the game's nine professions also gain a new elite specialisation giving you a new way to play your character. For example, the Ranger gains the ability to use a dagger and becomes a Soulbeast merging with her pet gaining new abilities whilst the Elementalist gains access to swords and becomes a Weaver able to wield magic from two elemental schools. Each profession’s new specialisation adds interesting new mechanics to learn and experiment with, the ones I’ve played with also don’t feel totally overpowered, feeling different to existing specialisations rather than better.

This isn’t to say that the expansion has no issues though, the expansion doesn’t include any new dungeon or raid content, which might be disappointing for those who were expecting that. There are also no direct new additions to World vs World or Structured Player vs Player outside the new profession specialisations mixing things up. Of course, all these things could come with regular updates and the next Living World season, but “out of the box” it’s noteworthy that these things are missing.

As a whole though, the Guild Wars 2: Path of Fire expansion is the most polished and entertaining release ArenaNet have pulled off since Guild Wars 2 launched five years ago, the experience gained from producing the Living World content shows through in the quality of the campaign and the environments they’ve made for you to get lost in.

Guild Wars 2: Path of Fire continues the story with an imaginative and fun campaign filled with great character moments and a reverence for the world of Tyria that is infectious. The addition of mounts that feel more than a speed boost is a welcome one but the lack of dungeon and raid content sticks out. 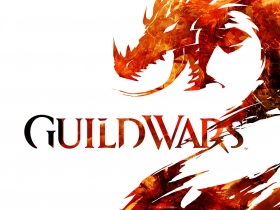