When you think of the Gundam series, your first thought should be of the stunning battles that occur throughout. With Gundam Versus, the latest title to make its way to the western market, players take control of the action with up to three versus three mobile suit combat with both online and offline play. With it finally making its way to the PlayStation 4, the question is whether the game is able to deliver on its promises and meet fans expectations.

Gundam Versus has an impressive roster of over 90 different mobile suits covering 19 different shows, movies, manga and games. You can pick up any of the units and find a moveset that is unique to each one meaning every mobile suit in the roster holds up on its own. As the game uses a point value system to rate each of the suits, it is worked into the health bars for the fights themselves. For example, if a match has a 1,000 point health limit and your unit costs 400 that is the amount that will be deduced when you fall in battle. The point system is a great way to help manage your battle strategy as it creates a risk and reward play style where you can offset power for that extra chance in a fight. 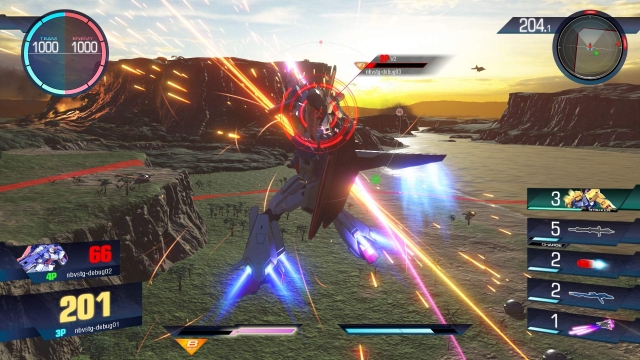 Each mobile suit has its own level attached to it that as you spend more time in battle with a select unit, you will earn experience with it. As they level up and you spend your GP you will be able to unlock extra support actions and some cosmetic items. As every mode can be a means to earn more experience and currency there is a continuous sense of progression to be found in the title. Though there is a lack of a story mode, the game does include a number of offline modes for players to fight through. From a standard Free Battle mode to the wave survival mode that is Ultimate battle and the Trial mode, where you fight through a number of matches to claim victory. Playing these modes is enjoyable for some time but after completing them with a few mobile suits you will find that there is a serious lack of replayability and variety.

Where this title stands out the most is in the visual department. The on screen spectacle of the mobile suits battling it out with over the top moves and explosions to match are rendered perfectly all with a solid frame rate. Fans of the series will know that capturing the magic of the animes action scenes scenes in video games can sometimes be tricky but thankfully, Gundam Versus hits the mark. Some of the most memorable songs from the soundtracks of the Gundam series are included, this means that you can enjoy both the visual and audio brilliance that is the Gundam universe. 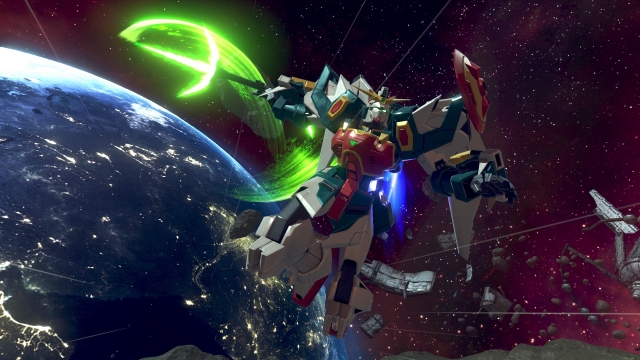 One of the downsides with Gundam Versus is that there are no options to turn on subtitles and therefore you feel like you miss out on a lot of the in game dialog. It’s not a deal breaker for the title but it feels like a missed opportunity. As a whole the localisation of the title seems to have missed the mark in a number of ways. The tutorial, for example, is poorly delivered and though it gets the job done it feels like a last minute addition rather than a smartly designed inclusion and does not help the learning curve.

Gundam Versus’ learning curve comes in the form of its controls. Take any fighting game and you’ll know that each has their own control scheme where every character behaves differently. This is the same for Gundam Versus but it does a rather poor job at translating the arcade stick design to a DualShock controller. For example, actions such as blocking an attack require you to quickly tap the down button on the directional pad and then tap, and hold, the up button. This back-and-forth motion makes sense on a fighting stick or an analog stick but on the DualShock controller the motion is too sensitive to be performed perfectly on the left stick. This example is only one of many cases in which the controls need to be executed flawlessly but due to the setup, can not be. It is possible to remap the controls but even with some fine tuning it never quite feels right. 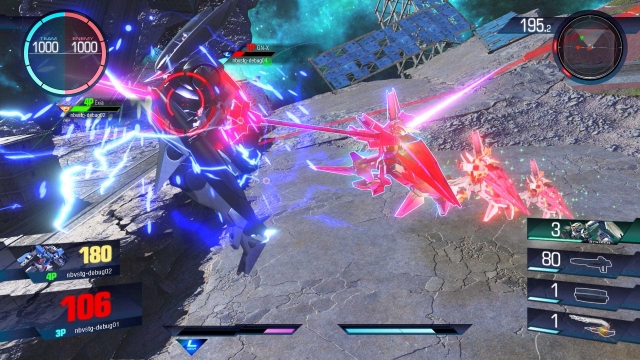 Beyond the impressive visuals and large collection of different Gundam units featured in the game there is not much else going for this title. Outside of the battles themselves there is not much content in the game to keep you entertained. Due to the lack of replayability and that each mode can be exhausted rather quickly, unless you fully invest yourself into the battles, it will be a short lived visit. The fact that there is a lack of split-screen in the game that has the option for three versus three combat, is a completly missed opportunity. What should be a dream title for Gundam fans falls short on the depth but delivers in the fan service department.

Gundam Versus is an interesting title that will tick all the boxes for any fan of the series but sadly does not feel like a complete package that is lacking in reliability and content. Though the gameplay is solid, even with some awkward controls, there is a solid fighting game to be found in this beautiful if somewhat empty title.

Gundam Versus (Reviewed on PlayStation 4)

Beyond the impressive visuals and large collection of different Gundam units featured in the game there is not much else going for this title. Gundam Versus is an interesting title that will tick all the boxes for any fan of the series but sadly does not feel like a complete package that is lacking in reliability and content. 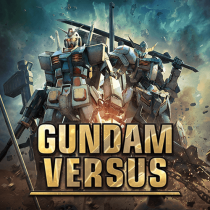