Hatsune Miku: Project DIVA Mega Mix is the latest game to release in SEGA’s popular Project DIVA series while also being the first to release on the Nintendo Switch. Packed with over 100 songs, over 300 costumes, and three game modes, Hatsune Miku and her Vocaloid friends make their way to the Nintendo Switch with quite a bang, even if it’s not much different from what fans have come to know and love from this rhythm game series.

Not to the surprise of anyone who is familiar with the series, the gameplay of Hatsune Miku: Project DIVA Mega Mix is exactly what you have come to know and love. For those unfamiliar however, this rhythm title sees you jumping into a wide variety of music genres to hit notes in time with the music as they fly in from all directions to rack up a high score. Sometimes you will need to hold a note for extra points, flick the thumbstick for a ‘slide’ note, or even press multiple notes at once. Should you get your timing right and earn big then you will clear the song, earning you points to spend on a number of costumes and extras. Rinse and repeat for all the songs and difficulties and you have yourself a highly addictive rhythm game. 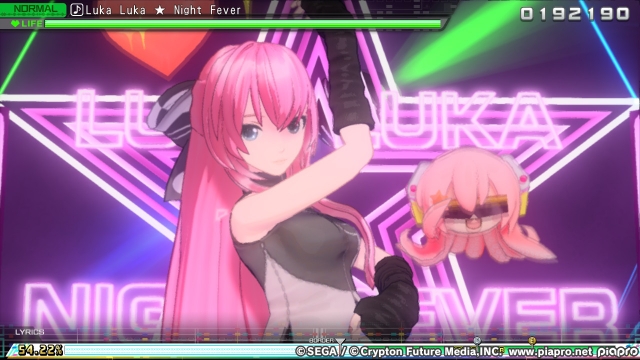 While this might sound like an easy feat Hatsune Miku: Project DIVA Mega Mix can offer a challenge that is sure to test even the most veteran of rhythm game players. Thankfully, the game offers five difficulty levels for all of the songs, giving you plenty of room to practice and hone your skills. This is helpful given how hectic it can become while playing as your screen fills with not only notes but also numerous visual effects, all in front of a typically colourful music video. Throw in the custom outfits you have made the Vocaloids wear and you'll be lucky not to get distracted.

Thankfully though Hatsune Miku: Project DIVA Mega Mix gives you the option to completely remap every button in the standard Arcade Mode, which can help with any difficulty curve. Not only is each note able to be swapped but buttons can be assigned for the holds, slides, and multiple button presses giving players full creative freedom on building a custom control scheme. On top of that you can even switch the note icons from that of the Nintendo Switch face buttons to the PlayStation symbols so it keeps with other entities in the series. The draw for the Nintendo Switch however is the new Mix Mode, that takes advantage of the hardware by allowing players to use the Joy-cons and enjoy some motion-based rhythm fun. This mode is less chaotic on the visual noise and only requires a few inputs. That said, you do need to tilt the respective Joy-con to line up the note but it’s more forgiving on the timing than the standard mode. It’s a bit of fun to help mix up the gameplay with every song supported albeit across fewer difficulty levels. That said, motion controls are not without their problems and it can quickly become a bit of a mess to play for more than a couple of songs at a time.

There is also a third game mode dubbed Touch Mode that was released for free as part of a day one patch. This mode, as the name entails, allows players to take advantage of the touch screen on the Nintendo Switch and play the songs in a mode more akin to that of a mobile rhythm game. It’s a bit tricky to find, needing to be turned on in the settings, but the mode itself is a lot of fun. Don’t expect it to be any easier though, as you’ll still need to swipe, hold, and press multiple notes in order to clear each song. Much like Mix Mode, it’s a nice way to break up the gameplay and provides variety but is best enjoyed in short bursts.
Another feature that Hatsune Miku: Project DIVA Mega Mix has that leverages the Nintendo Switch hardware is the built-in t-shirt editor. This allows you to use the touch screen of the console to create a custom pattern for your favorite Vocaloid to wear on stage. Given there are over 300 costume options already in the game, this small addition is just the icing on the cake even if its functionality is limited to just t-shirts. Though many will point out that Hatsune Miku: Project DIVA Mega Mix is not the most complete Project DIVA package on the market, with others offering more songs out of the box, it doesn’t stop it from being an enjoyable entry in the series. That along with the exclusive features to the Nintendo Switch help make it feel like a new entry in the series rather than a re-release. With plenty of fantastic songs, hundreds of outfits to unlock, and different ways to play, Hatsune Miku: Project DIVA Mega Mix is a highly enjoyable rhythm game for fans and newcomers of Vocaloid alike, and one that I highly recommend.

For the series debut on the Nintendo Switch, Hatsune Miku: Project DIVA Mega Mix does a fantastic job at offering an enjoyable experience for players new and old. 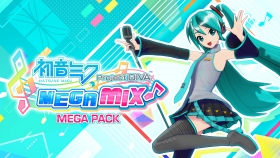