For such a basic platformer, there is a lot going on in HoPiKo. Perhaps some comparisons are due - HoPiKo is like a rave after five coffees. Or like being double-bounced on a trampoline. It’s a rush of adrenaline for every new level, but can be as frustrating as not timing the double bounce just right. Or sometimes, even falling out of the trampoline and onto the floor.

A virus has taken over the games console, and it’s gradually crippling it from the inside. This is why the HoPiKo, some undefined creatures that live in between its gears and wires, have set out to track these virus down and liberate fellow trapped HoPiKo. They will travel throughout every nook and cranny and restore the balance and functionality of the console, and they’re doing so by leaping and vibrating to the beat of the throbbing and magnetising soundtrack pounding in the background. 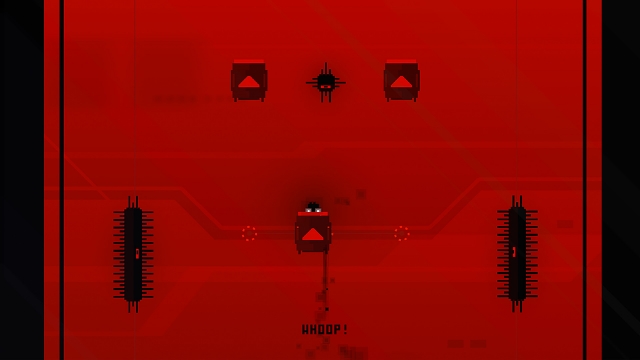 HoPiKo’s music is a modern reimagination of the videogame music genre, seen in classic NES such as Street Fighter. However, its soundtrack hits much harder with every beat. Every sound throughout has been produced with a Gameboy, merging the limitations of its sound system with modern electronic techniques, to provide exhilarating and enthralling tunes like no others. The result can be compared to late ‘90s electronic music coming from Eastern Europe, but without the leniency to include pop melodies and tasteless music videos.

This music is combined with a vibrating screen that shakes at every jump, as you attempt to land on the precise spot that makes platforms move just the way you want them to. All you do in this game is jump, but the type of platform you stand on determines how they react – some of them will flip, some will spin, and others will slide until they touch any of the electric edges of the level. As the game is structured in sets of five levels, if you drift off towards your own death, you will be forced to complete the set from the beginning. Although it ramps up the challenge, it can be infuriating having to repeat the first four levels a myriad of times just because you crack under the pressure of the fifth. 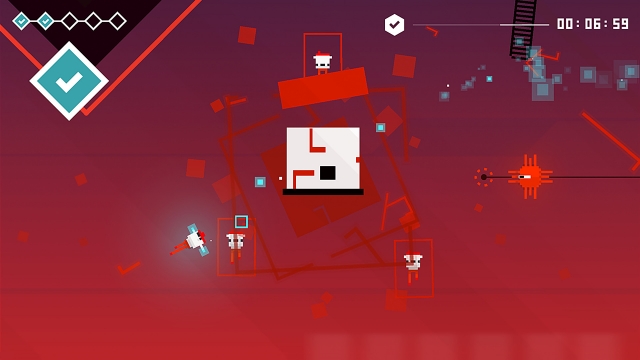 Despite the uncomplicated and amenable design of most levels, HoPiKo demands quick reflexes and precision from the player to complete the added challenges. There are platforms that self-destroy within a time limit, and require the player to step up their game and hop in and out quickly. Each level gives you a reward if you complete it within a certain time, as well as for reaching every collectible. Additionally, you can unlock modes like Speedrun and Hardcore, which increase the number of restrictions for those achievement hunters.

Much of what makes this game so vibrant is its electric and undulating visuals. Every platforms and obstacle throughout palpitates and ripples in the background, as if having electric currents passing through them to the beat of the music. The contrasting colours are chosen carefully, so HoPiKo never becomes a LSD trip, but rather a very focused caffeine rush. This way, it manages to shed any Hotline Miami vibe and be a whole game in its own. When I got my hands on this game for first time, I tackled it with the careless attitude of a deluded PC gamer – mouse and keyboard. Things didn’t go too well. The range of motion to accurately pinpoint where you want your character to jump is restricted by the boundaries of your screen. That means that even though you can’t see it, your pointer is still fluttering in the background as you move your mouse. The same attempt with a controller was better, no doubt, but still slow and clunk for the speed and precision this game requires. The reason for this? HoPiKo was originally released on tablets, where a tap of your fingers on where you want to leap next is faster than any other type of controller.

If there’s one thing to take from this review is the notion that HoPiKo is fast and stupefying, and there’s plenty of challenges for the more committed players to complete – in a way, meaningless fluff to ramp up the hour count. If unnecessary repetition doesn’t generally annoy you, this game may be the one that does it. Everything that makes this game so exhilarating and fast also can induce a headache after the fifth try of a level. But the music. It’s worth trying just for the music.

Although currently HoPiKo's controls are not perfect, the combination of electric visuals, music and pace achieves both the best and the worst of drinking too much coffee, but in videogame format.