When the first Hotline Miami game was release on Steam, I personally didn't pay much attention. I thought it was another punishingly difficult indie title much like Super Meat Boy, but with less meat and more top-down with guns. Big whoop. It wasn't until I heard the music from the game that I decided to try it out. And I was so glad I did. Hotline Miami’s biggest factor by far is its music, it’s almost entrancing, and astounding in its beats. Combine this with room to room hurting of other people, you push through; further into the rabbit hole as the story unfolds, you will be questioned about your character’s morality and mentality, and asked who is leaving messages on your answering machine?

While truth may of have been revealed in Hotline Miami 1 and lead protagonist Jacket found his answer, for others out there in Hotline Miami’s world there are still many questions left to be answered. For a long time, many fans were waiting for the sequel to arrive ever since it was announced. And much like any sequel, fans wanted it to be bigger and bolder than last, and Dennaton Games delivered. Creating a sequel which is longer, more varied than the last but keeping the same formula only kicked up a notch. Hotline Miami 2: The Wrong Number is the final conclusion to the series. But to me, it is Side B. This time round, The Wrong Number takes place before and after the events of the last game. You’ll be playing as characters with much more variety than the original Jacket from Hotline Miami. With multiple playable protagonists, you’ll go from playing journalist using non-lethal takedowns in a train station to another crazed mask-wearer, dual-wielding machine guns and clearing room full of mobsters.

With the game taking placing in past and present, and with multiple playable characters; each has their story to tell; the fans, 5-different playable characters, who continue the criminal / mobster killing spree that Jacket started; the journalist, who is on the mission to seek answers and write the next bestseller, the psychotic cop who uses his rank and power to his advantage; the soldier, fighting a war in Hawaii; and finally, the Russian mobster growing in power and control. Without delving into the story further, lets just say it’s a more crazed drug trip than original but with a true conclusion.

Masks are still in, giving the option at the beginning of each level for the fans, although for the most part, their mask relates to which character you play, as for example: choosing the Swans, you play as Ash and Alex; the gun and chainsaw-wielding duo; or if you choose Tony you get the infamous Tiger mask, killing punches but no weapons. There are less masks than the first, but in the later levels, as other characters lacking in a mask you either start with a selections of weapons or nothing. What made the first Hotline Miami great was the tightly closed rooms and floors to escalate through, smashing, slicing and shooting while trying not to lose your combo. Hotline Miami 2 retains this, but opens everything up more. Maps are larger and in being so, everything becomes that bit trickier. Not being able to see far ahead due to the size of the levels and without knowing the enemy patterns and placements, you’ll be for the majority of the time playing cat and mouse, luring enemies with a gun-shot or poking out getting attention to get the kill before they kill you. All this makes things that much more frustrating, more so than the first. I couldn't see ahead of me, so I had to continuously get myself killed just to know where to go. It’s all part of the learning curve, and in the end I found it actually makes the game more rewarding, similar to Dark Souls. The reward, knowing that once you've covered the walls and floors with the blood and move to the next room, you can breath a slight moment of relief before starting whole kill trip again. Who could continue without talking about the music? The game’s crème de la crème. With more tracks than the original, it’s a soundgasm of pulsing techno and retro beats, with new and returning artists, from Perturbator to Carpenter Brut. Each with their own style and glorious addition to the game’s already hypnotic blood-letting gameplay, whether it be taking place in a dark and dank crackhouse, amongst dazzling lights of a disco club, or in the gruelling war-torn jungle. It’s music that can be appreciated, and it is well worth wearing your headphones for.

Overall, Hotline Miami 2 may suffer at some points due to it’s level design, but when it gets good, it becomes astoundingly good. It’s still the same top-down f*ck them up but only bigger, longer and more brutal. And certainly a must for players of the first, even if it is for the soundtrack alone. As Dennaton Games put it - Hotline Miami 2: Wrong Number is either the best or second best Hotline Miami videogame EVER!

Overall, Hotline Miami 2 may suffer at some points due to it’s level design, but when it gets good, it becomes astoundingly good. It’s still the same top-down f*ck them up but only bigger, longer and more brutal. And certainly a must for players of the first, even if it is for the soundtrack alone.

Bullets coming from enemies I couldn't see is the exact reason I stopped playing the first one...

Then you won't enjoy this one. It happens a lot more often and is my biggest complaint.

I noticed as I read :P

I loved this game. Didn't resonate as much as the first, I thought the levels were a bit too open, that and the fact the story tried to be a Tarrantino film.

I know Ace haha. I'm sure it'll eventually hit PS+ I know Hotline 1 did a couple of times. Totally agree with you Dom. I loved it as well, but I have fonder memories of the first as well. Can't beat the music though on either. 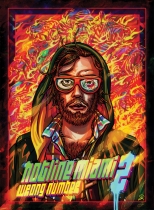