Get ready to be transported back to the arcade in the 90’s, albeit a more crisp and clear polygon looking version. Lucky Mountain Games and Sumo Digital have created Hotshot Racing, an homage to all those classic arcade style racing games, such as Outrun, Cruis’n USA and Daytona USA.

This is a pick-up and play game, there are no tutorials here. To learn, you just drive and pay attention to the loading screens between races. They often give handy hints on how you can make your driving better by boosting at the beginning of the race and how to drift around corners. This is definitely going to be a learning experience. 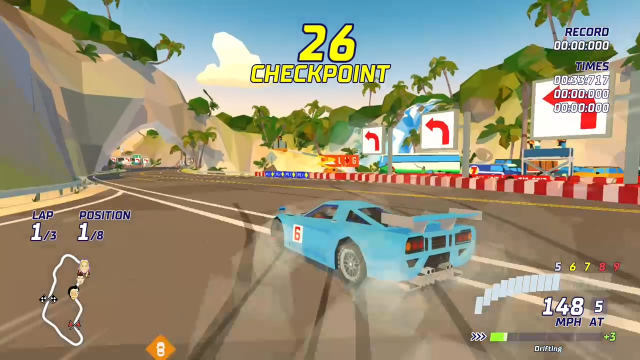 Hotshot Racing features eight different characters to choose from. Each character has their own backstory and their own collection of four unique cars to drive. Stats wise, each vehicle is different; one car is balanced between speed, acceleration and drift, one has high speed, one acceleration and the other is good at drifting. Experimenting with the different characters and vehicles helps figure out your driving style and which race car best suits it. It doesn’t make sense to choose a car that is great at acceleration, when you want to focus on drifting.

Choosing the car and driver you will be using is not the only thing you can customise. As you race, you earn money that can be spent on different outfits for your characters or, you can work on customizing your ride to make your car look the way you want. Not only can the paint be changed, but pretty much everything you can imagine. Rims, headlights, spoilers, the steering wheel, taillights, footboards, even the decoration on the rear view mirror. Personally, I was amazed how many things you could change on each car. Though like in real life, money doesn’t buy you everything, you will have to complete a task to unlock it.

So there is definitely a ton of replayability here, especially if you are a completionist. With 8 different racers with 4 cars each, you have 32 vehicles to unlock everything for. I customised one of my vehicles, I didn’t notice a difference performance wise, but damn it looks cool! 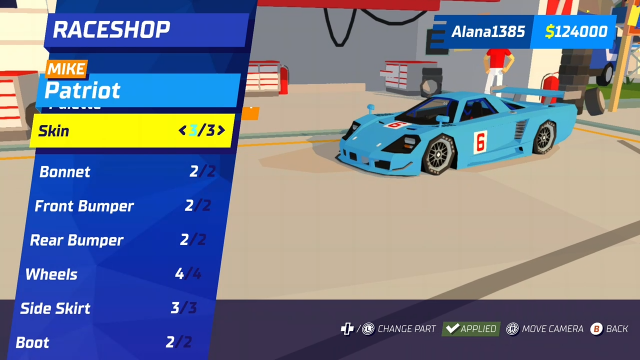 In the grand prix races there are four different cups; The Tour, Pro Circuit, Racing Elite and Hotshot! With four unique races; including tracks like Area 41, Castle Funfair, Ocean World, Dino Dash and Ski Paradise, there is a huge variety of locales you will race at. Besides having nice looking polygonal graphics, I personally love the way the dinosaurs look in Dino Dash, the T rex roaring at you sounded super cool.

During the races, the music was not the most memorable, but it really feels like it fits in the game. The soundtrack was not super loud, annoying or distracting, it almost felt relaxing, until someone takes it upon themselves to smash into you.

Warning you now, your opponents will go out of their way to smash you into a wall or another vehicle to pass you. It really sucks when you get hit in mid drift, chances are you are gonna slam into a wall. If it’s really bad they can spin you right around, which will have you furiously trying to reverse and turn around before you are left in the dust. My first few races, I did quite poorly and wasn't able to make it to the next checkpoint in time. But, as I played, I learned how to do things like boost off on the start line and that when you drift you earn boost power, especially if you can chain your drifts. If you take a corner too sharp or bump into the rail, don’t be surprised if the whole pack of racers fly past you.

You can go from 1st to last place in a couple seconds, although if you are in 8th place you are usually able to redeem yourself and catch up. In a lot of other racing games if you fall behind you will never be able to find the other racers, unless it’s Mario Kart and you get an awesome power up to use. When I see the finish line or the fireworks I start using the boost repeatedly, it’s kind of a butt move, but it feels needed to try and prevent anyone from taking your win. 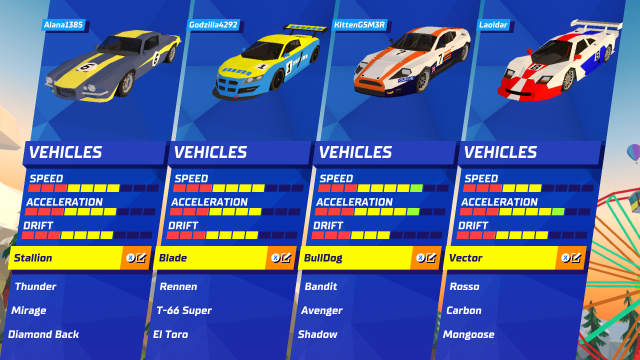 Hotshot Racing has local and online co-op available. Playing with your friends is a blast as you are trying to smash into each other and still make it to the next checkpoint. Even if you have four players, there will also be four computer players tossed in the race with you to add to the craziness. If one person is doing too well and needs a bit of a handicap, get them to drive in manual, if they aren’t already. If they are, you are kind of out of luck.

Luckily there are two other modes to challenge, when you get tired of normal racing. Cops and Robbers; evade the cops and make off with the money, or take down the robbers for a big cash bonus. Drive or Explode; keep up your speed to the minimum and make the checkpoints to avoid exploding. The sense of speed you feel is super cool, you really feel that you are going too fast and you could lose control at any minute. The longer you survive in Drive or Explode, the higher the required speed gets, so it gets crazy trying to take corners without slowing down too much. 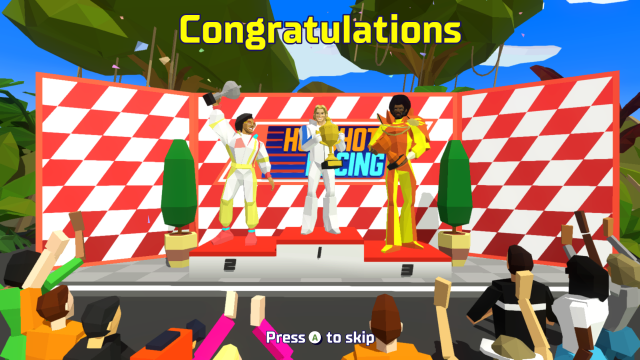 If you are looking for a fun racing game that has good single and multiplayer gameplay Hotshot Racing definitely fits the bill. Plus, there is so much nostalgia for anyone who played racing games at the arcade, or the N64/PlayStation era games. I love seeing polygons looking so nice and colourful, without the jagged edges! At first I found the game quite difficult, as I wasn’t used to the other racers being so aggressive. After practicing how to boost and drift properly I started doing better. It’s nice to find a game that, even on normal, is still challenging and motivates you to practice to improve. The game is fun and exciting to play so I highly recommend checking it out!

Hotshot Racing (Reviewed on Xbox One)

Beautiful looking, challenging racing game that recreates all the things you love about arcade racers. Great single and multiplayer experiences to be had here.