How to Survive Review

The zombie games market is now one of the most saturated markets out there. No matter what genre of game you want to play, there will be one with zombies. Eko Software have brought together a few of these genres, thrown in some undead fiends and here we have How to Survive.

Coupling together survival and top-down shooter, How To Survive pits you against a horde of zombies with a loose plot line of attempting to escape the multitude of infested islands to a supposed ‘safe haven’, whilst the entire time crafting yourself armour, weapons and means to survive. The game is tied together by a survival guide that you collect through your journey which informs you of different ways of killing zombies, fighting, crafting (including multiple blueprints for these items) and generally staying infection free.

The crafting system itself is fairly easy to use and quite satisfying. You find a stick, throw some flint on it, ba da bing, ba da boom, you have yourself an axe. It’s this sort of mantra that you end up taking whilst playing How to Survive: ‘Does this combine with anything? How about this? What if I do this?’. Personally, I found it more fun to experiment with the different materials that you pick up rather than attempting to find the blueprints to tell me. It made the game feel much more like a survival game and less like I was being spoon-fed and told how to play. The one big downside to the crafting system, however, is that it is all done within your inventory. On it’s own, this wouldn’t be so bad but when you access your inventory (or any other menu), the game freezes, and you can take your time with deciding what you want to do. This really removes all sense of danger and tension from the situation, for instance; I’m surrounded by zombies, I’ve been hit multiple times and am running low on health. I could run and try to escape but why bother? I’ll just freeze time, whip up a health remedy and continue my onslaught. Whilst this method does fit in with the style of a game that doesn’t take itself too seriously, it would’ve made for an all round better experience, had this been removed.

Along with this, the menus are all very clunky whilst in game. There doesn’t seem to be a natural flow and I often found myself forgetting where things were and spending too long finding them. This follows through into the limited talent tree available.

Most games that survive longer than a month these days will have some type of customisability; something to let the player feel like the protagonist is their own. Well, How to Survive is no different and offers customisability in a few different ways. The first of which is the talent tree but, as previously mentioned, it’s fairly limited. There are three different sets of skills that you can master and it seems like they’ve forgotten to add some in. One is for bows, one is for survival and one is for item collecting. It seems that they have forgotten about hand-to-hand combat or crafting entirely. Although the tree does suffice, it would’ve been better if they’d included a bit more variety. I often found myself thinking “I don’t want any of these skills” and just placing my skill point wherever, without really thinking about it. 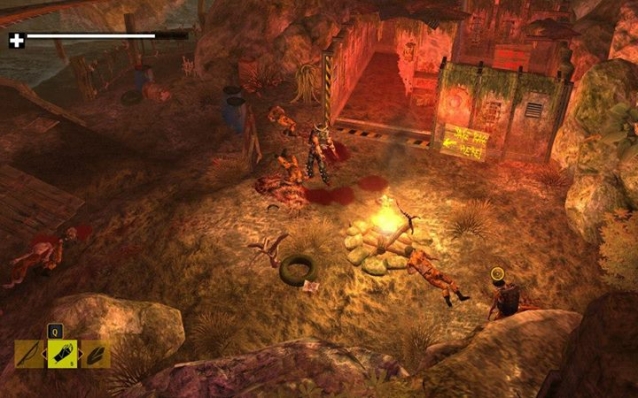 The second customisable option is your starting character. There are three to pick from and each have slightly different starting abilities such as increased stamina or health points. In essence, there isn’t much difference in the characters except from their models but this doesn’t really matter once you’ve equipped some armour anyway.

That cleanly brings us back to the final bit of customisation, crafting. You can craft armour and weapons and then improve these with the likes of flint and hardware. This is a nice little system and I quite enjoyed trying to forage bits of tire to create my leg and arm protection and then adding in spikes with bits of flint for further protection. Along with this, I enjoyed finding the parts of a really nice long bow and adorning it with stabilisers and pulley systems to increase accuracy and fire rate. However, all of this seemed a bit futile after I realised that I could get hold of three bits of bone, throw some flint on it and create an incredibly overpowered shoryuken. Once I’d gotten hold of this, it seemed like nothing else was very good in comparison and although I could have used a worse weapon to make it more difficult, it seemed somewhat redundant when this weapon was available. The game lost quite a lot of charm as crafting had become irrelevant to me.

You’re then left with the storyline and the zombie killing. The story is very linear, lasting no more than five hours, with one main story plot flowing through the game keeping you moving through with, for some reason, side quests given by chimps that can talk. Again, this game doesn’t take itself too seriously but this confused me to no end. That means that the main attraction to How to Survive is the zombie killing and luckily, this is what kept me going. No matter how many undead I decapitated, exploded or shot, it was always fun. It’s very addictive and after a while, you stop caring about the story all together and just want to destroy zombie after zombie. There are a few different variations of infected for you to destroy as well: the run of the mill walker, a large one that explodes with an uncanny resemblance to a Left 4 Dead Boomer, a large boss-like zombie that, again, resembles a Left 4 Dead Tank and night stalkers which, you guessed it, stalk you during the night time. You can scare them away by shining your torch on them or going near a fire. 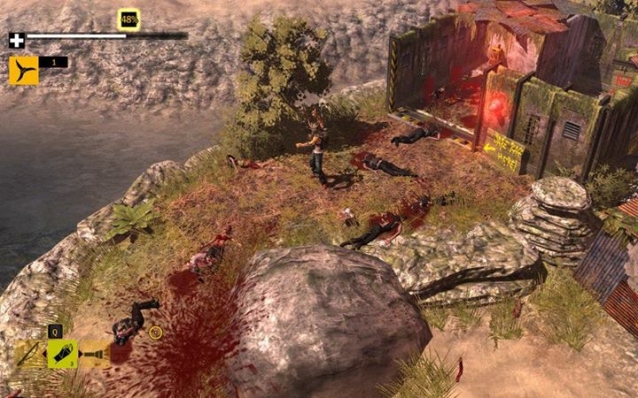 All of these zombies are fairly easy to take down on their own but if you happen to fall across a group of them, it’s like they’re a Tuesday night drunk and you’re holding to the key to the kebab shop. This is the only time that I felt like any skill was necessary as you need to be able to dodge and evade the infected whilst systematically removing their life. This would only usually happen once you reach a safe house.

These safe houses contain a bed to replenish your sleep (you have to keep yourself fed, hydrated and rested), some materials, and the entire cast of The Lion King Musical in zombified form. Once you open the door, an alarm will go off, attracting all local infected to your area as well as releasing the zombies from inside the safe house. They will continually file out of a small room, no bigger than a closet, and you really start to wonder where they come from.

Overall, How to Survive is a game that doesn’t take itself too seriously and it has no shame in showing you this. It has a fairly simplistic talent tree coupled with a very linear storyline spanning much less than the average title these days, a crafting system that becomes obsolete after a short while and a lack of save points. On paper, this game shouldn’t be very good but it’s the addictive nature of the zombie killing that saves How to Survive from the bargain bin. Eko Software have really hit the nail on the head, so to speak, with this gameplay style and was the only thing that kept me playing. Fans of mindless zombie killing will most likely enjoy this title whilst other, story driven gamers; maybe not so much.

How To Survive (Reviewed on Windows)

How to Survive is a top-down, zombie survival game that has you craft your way to victory. It’s fairly limited in what you can do with a linear storyline but has incredibly addictive zombie killing that kept me playing. Fans of mindless zombie killing will most likely enjoy this title whilst other, story driven gamers; maybe not so much.

How to Survive Review 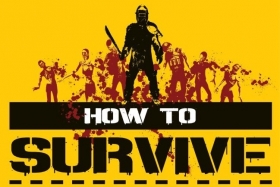