I'll start this off by saying Human: Fall Flat is one of the most endearing games I've played in a while. You control Bob, a white blob-like character with ragdoll physics. The game has elements of Surgeon Simulator with its controls, and LittleBigPlanet with its level design and emphasis on problem solving. All the game is missing is multiplayer compatibility and a voiceover from the inimitable Stephen Fry.

Good news for casual gamers: the buttons are relatively simple. On the PlayStation 4, press X to jump, R2 and L2 control the arms, and the analogue sticks control movement and direction. It really is that simple, with the aim being to negotiate your way through a series of uniquely designed levels. The levels are really well created, clever and vibrant in their design. Making your way through them is a lot of fun, and that eureka moment when you complete a tricky puzzle is quite rewarding. 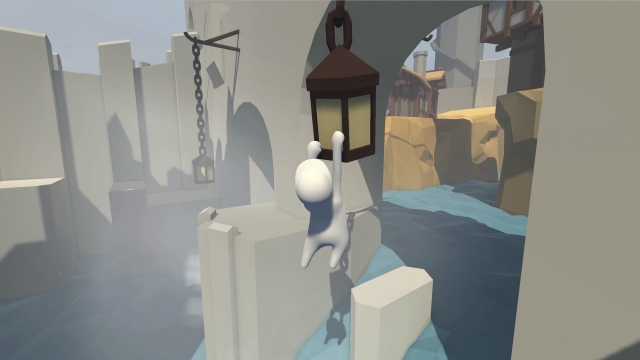 Yet, some of the appeal wears off when the puzzles are too complex to figure out. Although this isn’t the direct fault of the game, more my own frustration at not being able to solve some of the puzzles, the lack of help or clear tutorial led to many frustrating moments while playing the game. Sometimes it was a really obvious solution that I was completely oblivious to, other times they were pretty difficult. Challenge is great, but in physics-based games, things can get really frustrating, really fast. Having said that, you can find small video clues by picking up cassette tapes on the ground. These will give you hints and tips on how to beat those pesky puzzles, even if sometimes they didn’t help me enough.

Some of the smaller details of the game were the best moments; such as swinging from wrecking balls, taking a leap of faith in order to grab the next platform to move on, smashing glass with poles that can be picked up on the ground, and carrying boxes to drop them onto levers, which in turn open doors. In moments like this, I’d like there to be multiplayer compatibility. I like the idea of figuring out puzzles with somebody else, and with not many games focusing their attention on local multiplayer, I feel like Human: Fall Flat falls flat in this instance. 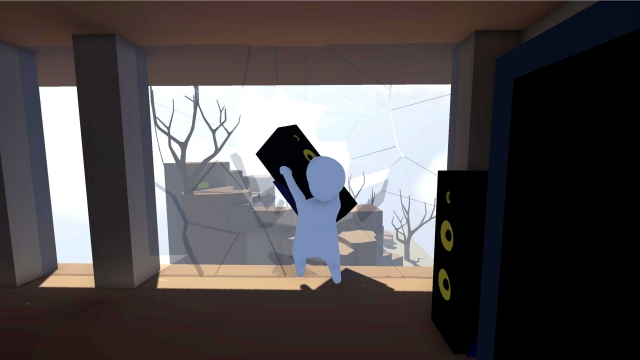 Having said that, the graphics in the game are extremely likeable. From Bob, to the textures, and the colours and shadowing, the game oozes quality from the off. The graphical design is elegant, and is further illuminated by the plain white colour that surrounds each level. These graphics are wonderfully accompanied by the whimsical soundtrack that only adds to the overall product.

Human: Fall Flat is quite an amusing game. Bob clumsily bundling into ornaments, falling off the map, tripping over small blockages and missing a platform by narrow margins are all quite amusing. In fairness, if I didn’t find things amusing, I’d find them downright annoying! It’s also one of those games where once you complete a level, there isn’t much reason to play it again, unless you’re a stickler for beating your previous record. Once again, that’s where the lack of multiplayer proves to be a drag on the game. 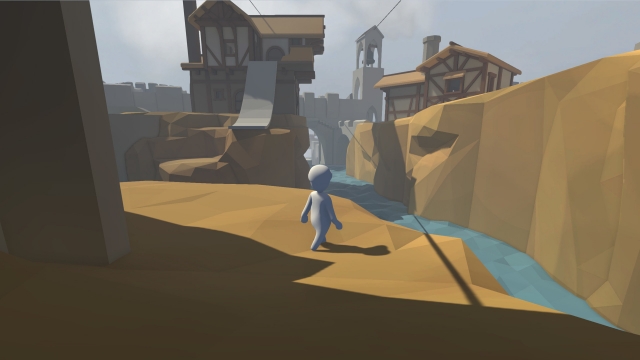 Human: Fall Flat is elegant in its gameplay and boasts delightful graphics. No matter how frustrated I got at not being able to solve puzzles, I kept at it because of just how enjoyable it was. The soundtrack that accompanies Human: Fall Flat works wonders also, and I loved how bright and vibrant the game was from start to finish.