I’m going to start this review with an apology to my editor and to the Ubisoft PR representative who kindly sent us a review copy of the game: I’m really sorry that this has taken so long to review. There is a good reason for this though, and I will explain it over the next few hundred words.

See, when I review a game, I like to make sure that I have played enough of the main campaign in order to review it fairly. With a AAA title, it’s not always possible to complete the game in time, but I like to be at least a good way through. With Immortals Fenyx Rising, getting through the story is actually a little bit harder than in most games. This isn’t because the story missions are too difficult or because it’s not enjoyable, but because exploring the open world of this adventure is just so very rewarding.

This is very much a game which actively encourages getting lost in the world around you. You’ll be on your way to the next mission and you’ll spot an interesting-looking temple so you’ll just nip over to investigate, and all of a sudden you are in the middle of an hour-long puzzle sequence with a miniboss to fight at the end. Things that distracted me during the game included cutting down some sparkly trees to collect sap for upgrades to my potions, killing some chickens that were guarding a chest, creeping round a silver pegasus to tame it as a mount, and climbing a cliff face to see what the shiny thing on top was (it was ambrosia). 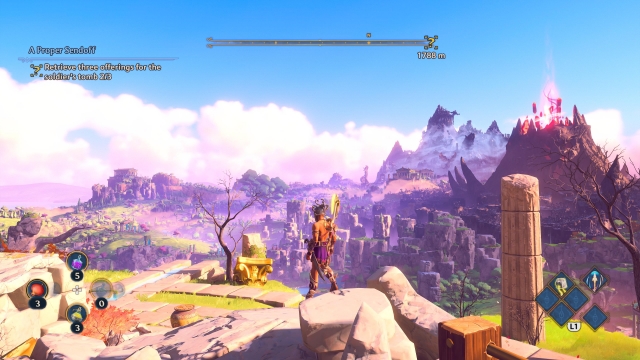 The more that I played the game, the more I would get distracted by the world and the more embarrassed I would get that I wasn’t playing efficiently enough to review it. But then, midway through fighting a cyclops who just happened to be heading the same direction as me, I had an epiphany moment: the sidetracking is the game. In a manner not entirely unlike Breath of the Wild, Immortals Fenyx Rising doesn’t hold your hand or expect you to follow a set path. There are indeed story quests to complete, but actually, you will get just as much fun, if not more, by exploring the world and discovering your own way to play.

That’s not to say that there is no structure, it’s just that it serves as guidance rather than being a mandatory linear path. There are a great number of collectibles that help boost your character’s stats, and these are found mainly by exploring rather than simply following the story. I feel the difficulty would be somewhat high if I were to just rush through the story missions in a blinkered fashion so this is clearly an intentional design choice.

The story of the game is still interesting, with most of the action being narrated as a story being told by Prometheus to Zeus, who are very caricatured versions of their mythological counterparts. Greek mythology abounds throughout, with most of it being relatively canon, but delivered in a rather tongue-in-cheek cartoonesque manner that belies the dramatic source material. You’ll not be using this as a way of revising for your history homework, but it does serve as a very basic introduction to many of the myths of ancient Greece if that’s something you’re interested in. If not, then you can just enjoy exploring the colourful and vivid world and it’s glorious inhabitants. 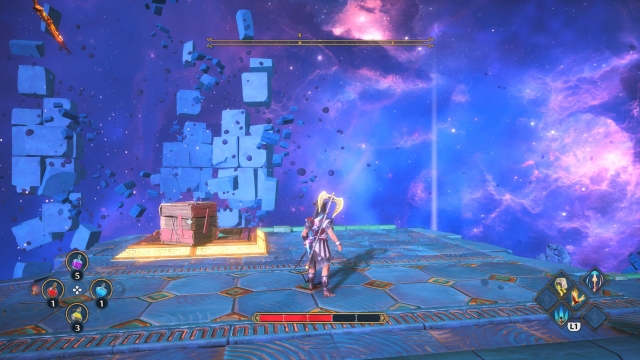 It’s a long-running joke that I can get lost in pretty much every game, including 2D platformers where such a thing shouldn’t really be possible, so I appreciate the fact that Immortals gives you a decent amount of guiding throughout the game with icons on both the map and HUD letting you know about quests, collectables and such things. It does somewhat exacerbate the sidetracking, but if you really want to just focus on your next main objective, you can always ignore the icons. Sometimes, with a lot of content around the world, it gets a little cluttered on the HUD, and as you can’t switch the icons for many things off, this can make navigation trickier than it needs to be in some areas.

The gameplay includes a mix of traditional Action-RPG hacking and slashing alongside some more sedate puzzle sections. These often take the form of “Vaults of Tartaros”, which are like mini dungeons. Each one has an epic chest with swanky loot in it, as well as a bolt of Zeus’ lightning, which you can collect to upgrade your stamina. This stamina mechanic is a bit of an odd one. Fenyx is able to scale mountains with his bare hands, but run out of stamina and you’ll need to eat mushrooms quickly in order to avoid falling to your untimely death. The thing that I found bizarre is that our titular hero can travel about the same distance up a sheer cliff face as they can swim and I often found myself close to death after a brisk 100m swim between two islands. It’s quite inconsistent and means that there’s a bit of hunting out of potions and food that needs to be done in order to explore a lot of the map.

The mushrooms that restore your stamina are plentiful, but taking them can be awkward, especially with some moves requiring multiple button presses, making it difficult to restore stamina whilst gliding through the environment. And you’ll be doing a lot of that thanks to the challenges scattered throughout the game, asking you to navigate between points quickly or fire arrows in a complex pattern that drains your stamina as you go. 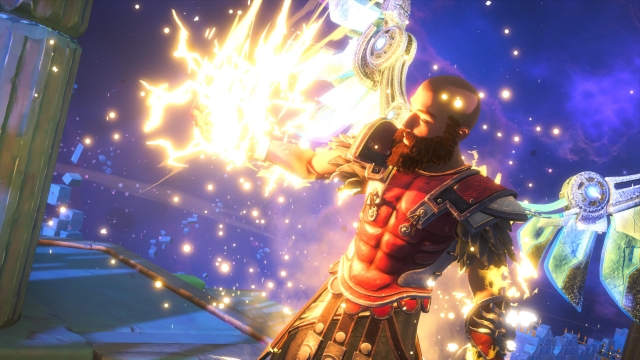 If it seems like there are a lot of features in the game, that’s because there are. This is nice from the point of view of building up your character in the way that best suits how you like to play, but it does mean that the control scheme is quite convoluted. Between skills that you can earn from the Gods, magical arrows that never run out, special attacks, and a companion bird that you can control whilst in battle, there’s hardly a button that isn’t used for multiple things. This also means that it’s not that difficult to accidentally hit the wrong combination of buttons and perform an action that you really didn’t mean to. The most common one I found was accidentally pressing a stick in during combat leading to opening camera mode. This combination can be turned off however, and the controls can be simplified somewhat in the accessibility settings, which are very comprehensive and cover many different eventualities. They also appear before the game starts, meaning that I was able to turn subtitles on before the opening cutscene, something which not all games allow and is often a bugbear of mine.

I played this game on both the PlayStation 4 and PlayStation 5, and I would advise the latter over the former. The graphics are lovely in both cases but they are much more vibrant in HDR on the PlayStation 5. The main difference though was the speedier load times on the PlayStation 5. On the PlayStation 4, it can take a full minute to go from inserting the disc to actually playing, and there’s a noticeable delay in getting back into the action after dying. As there’s nothing to stop you taking on any of the game’s creatures at any time, this happens a reasonable amount, with the temptation to try and take out something huge often too great to resist! There are visual cues as to whether an enemy is potentially too high level to attack successfully, but whilst loading screen tips tell you about the existence of these, it doesn’t actually tell you what they are so I had to look it up online! 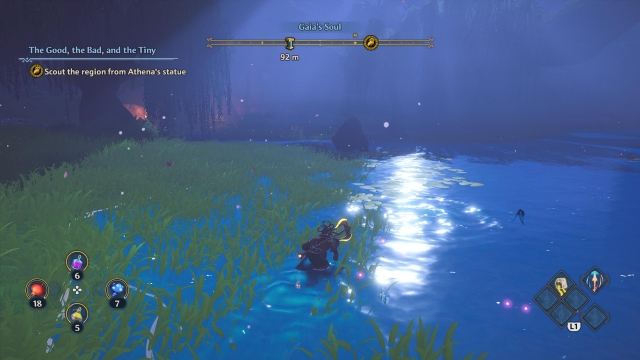 I also had to look up a lot of the vaults online as what’s required isn’t always obvious, especially with some of the harder ones. Whilst I do love the freedom that’s provided by Immortals, there are times when actually I would have liked a little bit of hand holding just to work out what I’m supposed to be doing!

If the worst thing that you can say about an epic open-world game like this is that it’s a bit hard in places and sometimes you have to look up what to do, then that’s pretty good. There is absolutely loads to love about Immortals and I’ve really enjoyed it. Whilst it’s not the perfect game, it’s certainly very polished and an excellent new IP that I’m looking forward to seeing more of over the years. 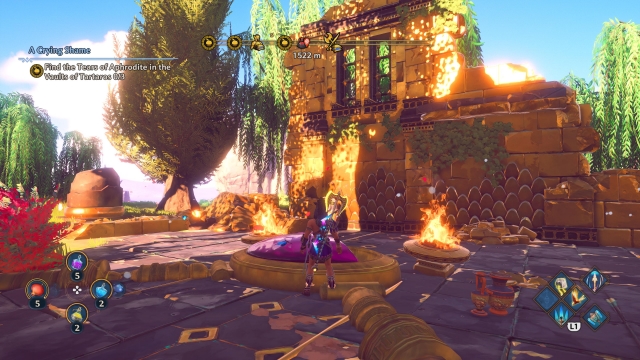 An epic open-world Action RPG with a tonne of content and genuinely enjoyable exploration makes for a great new IP. There are a few niggles with controls and loading times, and it’s not always clear what you need to do, but when the game is this much fun, I’m happy to overlook those.