Do little thinking and keep the momentum going and use your impulses to succeed, that’s what is key in Driving Force Game’s Impulsion.

Impulsion places you in the shoes of MP-52 on an unknown space station and you’re tasked with a test of speed and reflexes in a variety of almost sadistic environments. Test chambers that have you dodging and jumping over barriers, avoiding lasers and your inevitable death. Well, I say death, as the whole experience is run in a simulation and it’s down to you to try and try again until you reach the next stage, only to be welcomed by another cumbersome, perplexing chamber.

The tools provided come in a form of dual-wielding guns, offering a combination of speed and slowness. Much like the use of the blue and orange portal gun, these guns give either a blue (speed) zone or a red (slow) zone. But there is a caveat: blue can be fired onto any surface but red can only be fired onto designated areas. This sees you firing a blue zone for speed and height and firing at a red zone to give that brief moment of slow down to either jump, avoiding the deadly depths below or slow yourself down just enough to avoid the numerous laser grids. 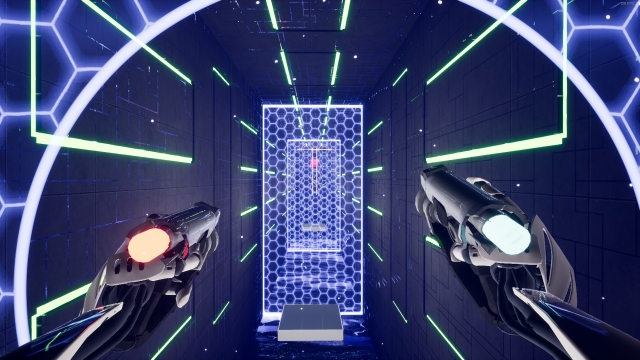 Combined in quick succession you use both guns to reach the goal. Of course, that's easier said than done as you will fail, numerous times. Everything in Impulsion is about trial and error, and with that comes a lot of frustration. Like Super Meat Boy and Hotline Miami, there are no checkpoints, and there is no mid-level saving. You have to complete each stage in a single run. Pressing R lets you restart, so if you know you fail hit R, to restart and be belittled by the games' A.I., Archie.

Aside from the Portal like test-chambers, Impulsion has its own A.I. that's there to encourage and berate. At the start of each stage, Archie gives you a hint on what to do to proceed. This is either a quip about using speed or a heads-up on awaiting danger. Aside from this, the plot is run thin and feels more like an afterthought, so don't expect any expanded lore or interesting tidbits of the world you play in. You do though have the occasional conversation with Archie, which boils down to either a smarmy remark or sarcasm. 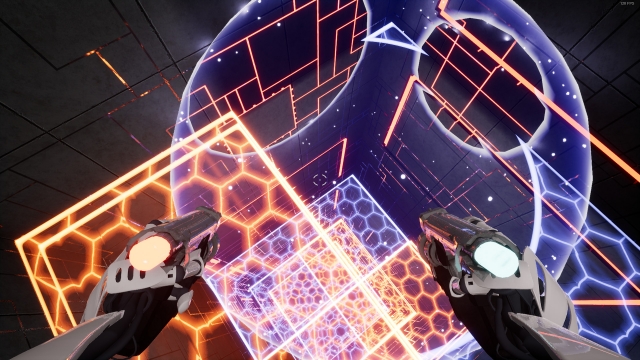 What Impulsion does provide is an exhilarating, intense challenge across its 25 levels, that does feel rewarding. With the blue speed gun, you gain haste and height to avoid laser barriers and the red slow gun to leap from wall to wall in quick succession. It’s all about that trial and error, eventually the more you fail the better you will become. With that said, you have to think on well, impulse, you're encouraged to go with the flow and hope for the best. Unfortunately, that doesn’t mean some thought has to be made, as there are plenty of nefarious obstacles to bypass, some involve using the speed to shift the movement of a laser grid or slowing down oncoming laser fire.

Impulsion is at heart a speedrunner’s dream. With each level ranking you up to S, you can repeat levels from the game’s station hub and better yourself, or if you’re in for a real challenge play the timed speedrunner mode. You can even challenge your friends in Competitive mode too. 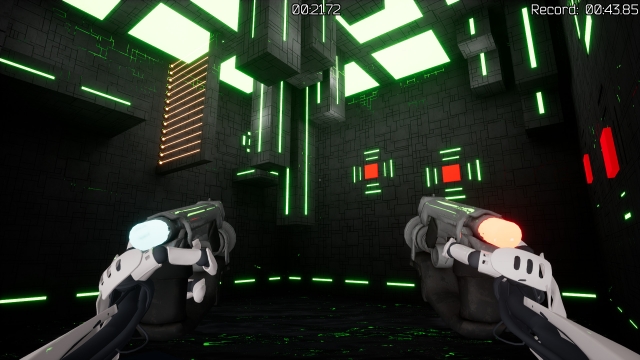 Impulsion coming in at £10.29 on Steam is an easy recommendation. Although, the game is rather short, but that entirely depends on skill (you can finish the game’s story from anywhere to little over an hour to a few). The longevity is in its replayability to offer a greater challenge. If you’re a fan of Portal and want another quirky test-chamber 3D-platformer that tests your skills, reflexes and patience, you can’t go wrong with Impulsion.

Although short, the longevity is in its replayability to offer a greater challenge. If you’re a fan of Portal and want another quirky test-chamber 3D-platformer that tests your skills, reflexes and patience, you can’t go wrong with Impulsion.