It came from space and ate our brains Review

“Vivid neon flashes that punctuate a largely grey, monotonous world” is a sentence that I initially wrote in reference to the art style of (the strangely uncapitalised) It came from space and ate our brains, but it could just as easily serve as a representation of the game as a whole. Triangle Studios has succeeded in crafting the core of a fun top-down co-op shooter; unfortunately, it falls short by failing to back that up with substantial amounts of content. It’s got the bones, but there’s not enough meat.

From the get-go, It came from space and ate our brains (hereon referred to as merely ‘It came from space’) is absolutely unceremonious in its presentation. Short of what can be drawn from the title, there’s no story or context for the game’s events: players are dropped into one of six levels (for the main campaign) and must shoot a variety of pink and blue aliens while reaching a series of Left 4 Dead style safehouse checkpoints. I won’t criticise this simplicity too harshly, after all, this is a game intended to fill a similar entertainment-void as ‘Whack-a-Mole’ —it doesn’t need great depth. However, the extent to which it fails to provide any sort of grounding in a setting, character, motivation, goal or sense of progression is impossible to ignore. It feels like a prototype or a proof-of-concept; even the weapon upgrade system resets at the beginning of every stage, leaving the whole campaign feeling disconnected. 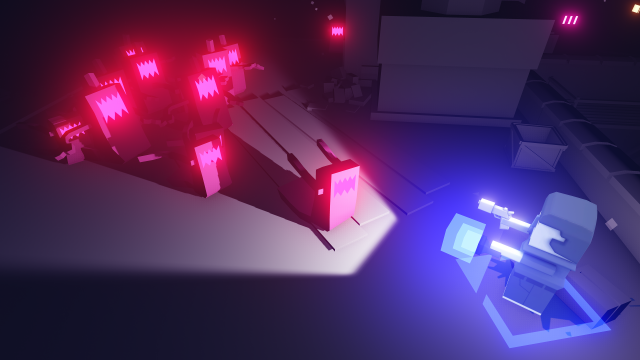 As for the gameplay itself —namely, the shooting— I can happily sing the praises of It came from space. The six weapons (pistol, machine gun, shotgun, laser rifle, plasma rifle and rocket launcher) are all distinct from one another and most of them feel good in that ‘hard-to-describe’, punchy way. Each weapon can be upgraded up to three times with the cash earned from all the alien-bloodshed, and with each successive rung of the upgrade ladder, the weaponry only gets more powerful and fun to use. My personal favourite is the laser rifle, which becomes a solid laser beam when fully upgraded; at the bottom of my list is definitely the rocket launcher, anyone relying on it to take on the alien hordes won’t be left standing for long.

Speaking of not being left standing, It came from space provides a hefty challenge, regardless of whether played solo or co-op. The alien horde comes in a variety of distinct types: big, small, fast, slow, capable of dodging, capable of leaping and more. These extraterrestrial menaces quickly flood the level in overwhelming numbers; smart use of the ‘dash’ ability is crucial to survival because even at maximum health, four hits from an enemy is enough to send players back to the last checkpoint. Alongside cash pickups and health kits, a few one-time use power-ups can be found throughout the levels. Things like turrets, shields, mines and temporary access to high-powered weaponry aren’t exactly groundbreaking, but they help even the odds and break up the repetition of combat. 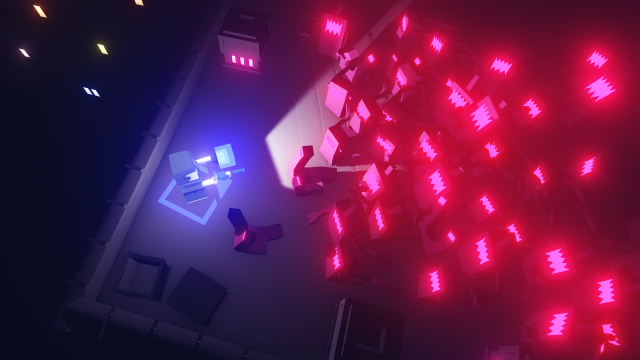 With 18 maps spread across two game modes —Campaign and Survival— there’s a fair amount of content on offer, or at least, on paper there is. In reality, the game’s art style leaves every map feeling incredibly samey. Colours are used sparingly, and while the few bright flashes of colour within the environments are undeniably eye-catching, they leave everything else a dull collection of black and grey. Sewers, city streets, hospitals, rooftops, caves and farmyards —they all look frustratingly similar and it quickly becomes tedious.

The survival mode offers a similar experience to the campaign, albeit with self-contained arena style levels that end after the survival of enough enemy waves. While I appreciate the inclusion of a more quickfire, pick-up-and-play mode, the survival stages are generally over too quick for my taste. It hardly feels like they’ve gotten going before the action’s over and a ‘Victory!’ message pops up on screen. 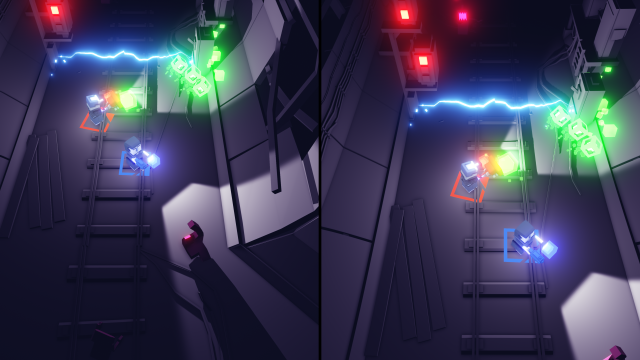 More than anything, my major complaint with this title concerns how empty it feels. The opening 30 minutes —when the thrill of combat was fresh— had me gripped, but past that, it didn’t provide any sort of hook to keep me coming back. No story, no permanent upgrades, no significant change in scenery and little to break up the rhythm of gameplay. Even one of these things being included would have worked wonders for the game’s longevity and sense of ‘completeness’ as an experience.

Triangle Studios’ latest release makes a strong first impression with striking visual effects and satisfying shooting mechanics. Sadly, the appeal quickly wears thin, exposing its repetitive gameplay and samey environments. Good for a handful of short bursts, especially with friends, but it feels too much like an unfinished product to fully recommend.

Triangle Studios’ latest release makes a strong first impression with striking visual effects and satisfying shooting mechanics. Sadly, the appeal quickly wears thin, exposing its repetitive gameplay and samey environments. Good for a handful of short bursts, especially with friends, but it feels too much like an unfinished product to fully recommend.

It came from space and ate our brains