Kill it With Fire Review

Britain is home to around 650 different types of spider, and none of them are particularly dangerous. In fact, only three of them can bite, and their venom isn’t strong enough to do much more damage than an insect bite for most people. Nevertheless, it’s reasonably common for my compatriots to freak out at the sight of these harmless arachnids, and the title of this game by solo developer Casey Donellan is a pretty common reaction to their appearance.

Personally, as a rabbit owner, I’m quite fond of spiders as they eat the flies that could potentially be harmful to our buns, but I can appreciate that not everyone is quite as pleased to see our eight-legged friends as I am. Kill it With Fire is a game for everyone who wants to see these minibeasts eradicated, or anyone who wants to cause a stupid amount of damage for no logical reason, and who doesn’t fall into one of those two categories?

There’s not a huge amount of gameplay to speak of here, you are limited to picking up and throwing objects, and using various weapons to kill spiders. There’s a limited scope for creativity as there are a few areas where it’s possible to use the environment to kill spiders such as when you acquire helium balloons and can levitate objects before dropping them on spiders. Along the way you’ll find ninja throwing stars, various kinds of guns, flamethrowers, bombs and all manner of dangerous weapons. You’ll use these to destroy spiders, and in some cases, the scenery and objects around you as well. Why yes, that is a toilet on fire.

The more you kill, the more of the level is unlocked, with doors and additional areas opened as the number of remaining enemies decreases. There are also a number of extra goals that you can unlock as you go such as collecting tools to put away in a garage, or killing a certain number of a particular type of spider. This adds an extra element to a game that would otherwise be rather simple.

Those different spider types only add so much unfortunately, and they are generally rather similar. They look slightly different and they have slightly different behaviours, but there’s very little difference in how you need to approach them. For all the extravagant weapons too, I actually found that in a lot of cases it was just as easy to whack them with the clipboard that you start out with. Slicing a spider in two with a shuriken is pretty cool, but it’s also quite fiddly so after the novelty wore off, I found myself going back to the efficient simplicity of squishing them with a flat object. I wonder what caused all this destruction? Oh wait, it was me.

One thing I really liked was the “Arachno-Gauntlet” challenges that open up when you have completed all the optional goals in a level. These are tough challenges that see you given a limited amount of time to kill spiders with harsh restrictions, such as killing five spiders with six bullets. This is another touch that I felt added longevity to the game where it would have otherwise been a much shorter experience.

Make no mistake, this is a short experience, but there’s enough here to justify the budget asking price. It’s the kind of game that you’re unlikely to return to after having completed it, but you probably already expected that. It’s rare that anyone replays Goat Simulator or Untitled Goose Game but they were still great games. It might not have the legs to be an epic saga, but if you want a few hours of silly enjoyment then you could do a lot worse than picking up this game. There’s no physical edition, but you can purchase it on the web from Steam and the Epic Store. 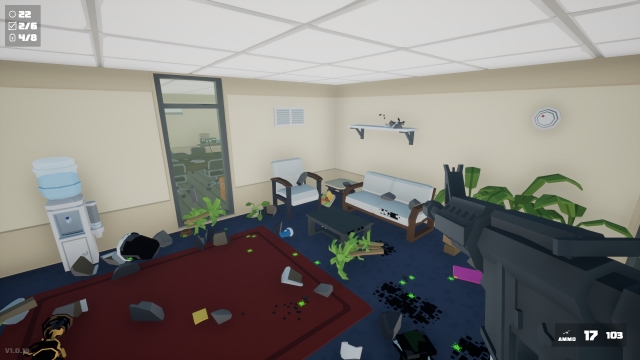 Kill It With Fire (Reviewed on Windows)

Whilst Kill it With Fire is a short experience, there’s still enough here to justify the budget asking price. It’s the kind of game that you’re unlikely to return to after having completed it, but you probably already expected that. It might not have the legs to be an epic saga, but if you want a few hours of silly enjoyment then you could do a lot worse than picking up this game.

Kill it With Fire Review

Kill It With Fire