Back in 2014, a little indie game called Banished was released to the world. The first real survival strategy title, Banished was a brutally punishing experience about building a little village out of nothing, and it stands to this day as a prime example of indie strategy done right. Now, three years later, a new take on village survival comes in the shape of Kingdoms and Castles, and it’s a doozy.

Focusing on growing a tiny little village into a sprawling fortified city, Lion Shield’s debut title is a surprisingly capable strategy game. You start by placing a simple castle keep anywhere on the land and building small hamlets for your villagers, which then proceed to chop wood. Through the placement of foresters and quarries, you can automate the process of gathering resources, freeing you to focus on the much more important aspect of city development. 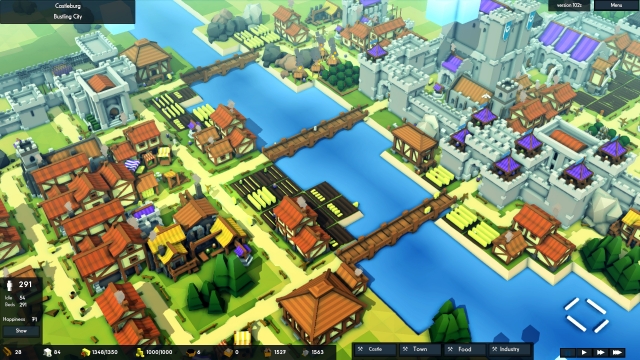 Due to the simple yet careful interplay of systems, the placement of buildings is very important in Kingdoms and Castles. Farms need to be close enough to granaries to store the food before the harvest goes bad; libraries, churches, and taverns must be close to houses so their residents can reap their benefits; and wells must be close to any structure in case of fire. In order to balance all that, roads are an essential part of the design, speeding up peasants’ movement and allowing for faster access to all parts of the village.

However, space on the randomly-generated islands is limited, meaning you must juggle not only building placement and resource gathering structures, but also the building of walls. The world can be a scary place, with Vikings and Dragons roaming the land and threatening the survival of your kingdom. Vikings especially can be a dangerous obstacle, raiding your settlement, kidnapping your settlers, and setting fire to everything in their path unless you stop them from getting in. While normal soldiers can’t get past normal fortifications, the ogres that accompany them can, so you must build tall perimeter defences to be able to withstand their grotesque pummelling. 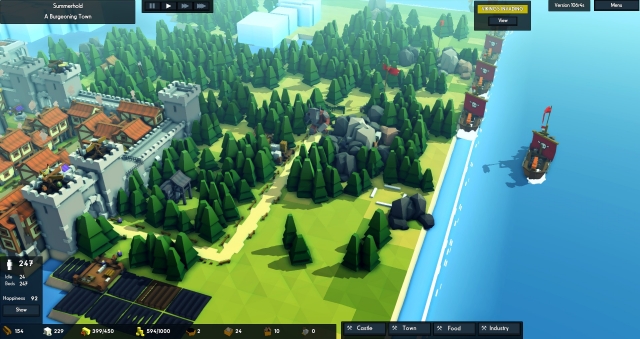 While huge stone walls may keep you safe from Vikings, they pose little threat to a dragon. Building ballistas and archer towers on top of your walls allows you to shoot them down before the flying lizards set your settlement ablaze, and the creatures triumphantly topple to the ground and shake the screen with a thump upon impact. The higher the walls, the further the range of your defenses, adding a degree of strategic spending and tactical thinking to your building and making a somewhat simple concept tastefully complex.

Similarly tasteful is the settlement progression, even if the overall extent of choices is a bit bare. Houses range from small hamlets to big manors and your castle can be upgraded with War Chambers, Treasury Rooms, and Great Halls, while farms feature a number of adjoining structures such as windmills and aqueducts to increase their productivity. There is an interesting variety of building options, such as libraries, churches, and bakers, but given how most of them are essential, a more expanded range of optional buildings and upgrades would be very welcome. 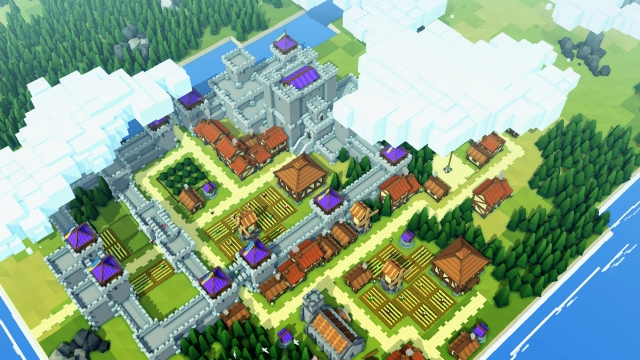 All buildings look extremely well modeled and distinct, allowing you to quickly recognise them at a glance even in emergencies. With a cute low-poly aesthetic and a cartoonesque take on the survival genre, Kingdoms and Castles is less grim and serious than similar titles, but no less brutal -- aside from food, disease, and Viking attacks, you can lose villagers to drowning, accidents, and age. Overall, the normal difficulty offers a wonderfully relaxing and laid back atmosphere: I played about 10 years in-game before I even saw a dragon, and another 10 before I had my first plague outbreak. Vikings only came around the fourth or fifth decade of my village’s existence, at which point I already had enough walls and armaments to beat their invasion back, taking few casualties in the process.

The invasion itself was slightly traumatic, in a figurative way as a player and in a literal way to my settlers. To me, it was an unexpected event -- one of your advisors warns you vikings were spotted a fair time before they arrive, but the game gives you no clue about what that invasion will entail. The result was a surprise and heavily tense engagement, where I wasn’t sure what would happen and was forced to adapt on the fly. Having survived it, I can learn from the attack and tailor my strategies to utterly repel them next time. It’s a thrilling prospect. 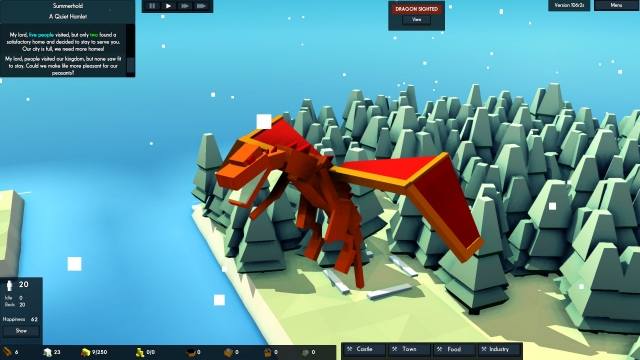 The peasants had it a little rougher. Their happiness took a massive bump due to the trauma of the attack, and if any of your people are captured, word spreads across the land that you were unsuccessful in defending your kingdom. As Kingdoms and Castles doesn’t feature a reproduction mechanic, the only way to get new subjects is when people who visit your land decide to stay -- if you fail to defend your city from attackers, no one will travel there and dare take that risk.

As wonderfully relaxing and stylistic as Kingdoms and Castles is, it is not without its flaws. Farms only produce food in the summer, meaning that during winter, you get several peasants just standing around doing nothing in the middle of frozen fields. This is not especially egregious when you have a thousand people in your hamlet, but quite a big problem in the early game -- the interface requires you to click on each farm and close them down manually if you want to free farmers to do other chores, which besides being extremely boring and draining, should by all means be something the game does by itself.

Meanwhile, "disasters” like plagues and fire offer very little time to react if you don’t already have all the infrastructure in place, which can lead to devastating occurences that feel severely unfair. Fire is especially in dire need of a revamp, as it often burns faster than your villagers can put it out and forces you to fill your town with dozens of wells within sight of each other, limiting freedom of choice and turning half your site into a senseless eyesore. More egregiously, fire can break out in the same place multiple times in a row and is not dampened by thunderstorms and rain, which makes it unbelievable frustrating at times. 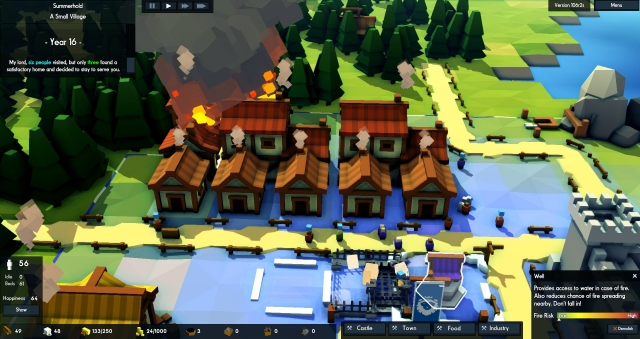 The length of years also feel slightly off, going past way too fast at normal speed and not being very reflective of the way the world behaves. Depending on the size of your settlement, your villagers can take the better part of a year to cross it from one end to the next, rendering construction projects on the outskirts of town a multi-year endeavour. While it is isn’t exactly taxing, it does feel a bit off-putting when a simple cottage takes nearly two years to be built -- or a manor takes four. As a reference, the mighty Colosseum in Roma was built in under eight years.

As weird as the previously mentioned things are, Kingdoms and Castles feels tremendously polished. The game has high production standards, from the interface and sound effects to the way buildings “plop” with smoke when you place their outlines for construction. It feels like a quality game right from the start, and that’s an amazing achievement coming from a two-man development team. 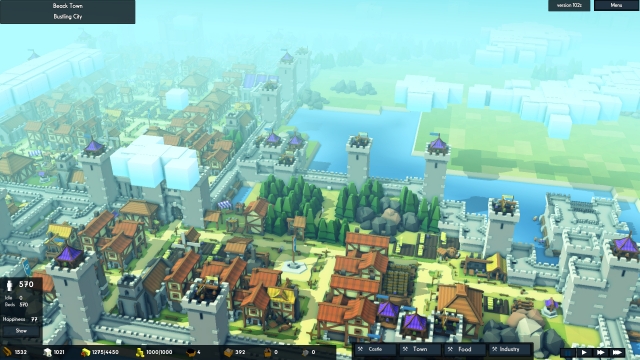 While the graphics are very pleasing, complete with shadows and weather effects, the music is a mixed bag. The compositions are incredibly competent and varied, providing a wonderful musical landscape for the game, but their frequent use of arpeggiato and polytonality ends up polluting the experience. Strategy games often favour long play sessions, and after an hour with the game, I wanted to claw my ears out. I don’t recommend the music be changed -- instead, the soundtrack should be expanded with more atmospheric and ambiant tracks that favour a dolce and more low profile soundscape.

In the end, however, Kingdoms and Castles is an amazingly sweet experience. It currently has a lot of room to grow, but the base experience is already very satisfying -- with charming graphics and smooth gameplay, this is one of those games you can just lose yourself for hours after a hard day’s work. The best titles in the strategy genre have that amazing ability to let you accomplish something while providing you a relaxing experience, and in that regard, Kingdoms and Castles is up there with the best of them.

Kingdoms and Castles (Reviewed on Windows)

A great little game with an amazing aesthetic, but with a lot of ways to grow.