Knights of Pen and Paper 2 Review

I have only ever played Dungeons & Dragons once. One rainy summer’s day three friends and I tried out a dusty D&D set we found in a pile of board games. It was a version that meant you couldn’t create your own characters and we played it for some time, enjoying the (albeit slightly restricted) freedom of our collective imagination. It’s that feeling that KYY Games seeks to emulate with Knights of Pen and Paper 2.

From minute one, the game thrusts you into the world of the D&D player, complete with tropes, clichés, in-jokes and references. You play a set of intrepid adventurers making their way through the world of ‘Paperos’, attempting to foil the plans of the dastardly Paper Knight who is wreaking havoc throughout the land by blurring the lines between 1st and 2nd edition rules. You can choose from a wide variety of classes right from the start and the game introduces a novel method of character creation. Your adventurers start out life as goths, jocks and nerds – who are then transformed by your choices in dwarves, elves and human warriors, thieves and wizards. This is what I find most charming about Knights of Pen and Paper 2: the game is played not in the world of Paperos but at the table of the Dungeon Master - quite literally. Your characters’ imaginations set the scene behind the table where environments, enemies, NPCs and quests appear. Everything is done via dice roll: from battle, to travelling, to searching dungeons. All of this is visualised in a quaint pixel art style reminiscent of the classic RPGs on the SNES and Game Boy back in the day. Indeed, the game takes as many jabs as possible at its predecessors and at staples of the genre, with your adventurers complaining about fetch quests, n00bs and experience points to name but a few.

Knights 2 doesn’t pull any punches when it comes to the nitty-gritty, though: this game is very much a full-fledged RPG. There are more than enough stats, character sheets, bonuses, skills and effects to keep any fan of the genre happy. Mixing the myriad of classes, races and D&D players results in an impressive amount of variability for a game launched on iOS. Add into that an expansive map and quest system, a mind-boggling variety of enemies not to mention an incredible array of weapons, armours and accessories.

The battle system in Knights 2, apart from in quest-specific situations, allows the player to pick and choose the enemies they face. You can fight up to five foes at one time, and a slider beneath your selection lets you know how tough a fight you’re setting up for yourself. A hefty enemy amount and variety experience bonus keeps things interesting, challenging the player to push themselves harder and harder in the quest for that next level. 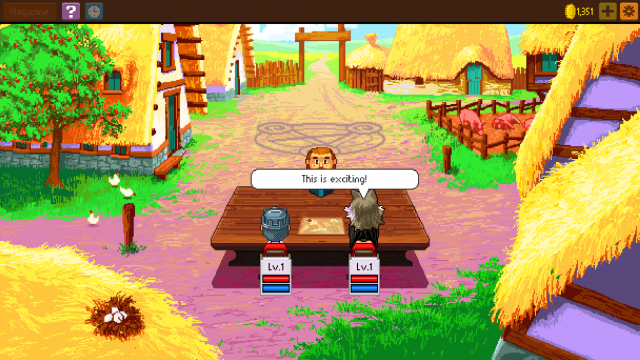 In battle itself, the controls are slick and straightforward while avoiding simplicity. Each character has two passive skills and four active ones that can be used in battle, as well as standard commands like attack, shield and flee. On top of this, each of them has a threat value. The higher the threat value the more likely they are to be attacked. This adds a neat extra dimension to combat, directing enemies towards your tank characters and taking the pressure from your healers.

Boss battles and set-piece encounters are tense and can often have you scrambling for healing items and resurrection feathers – this isn’t an RPG that will hold your hand throughout. There’s a far deeper level of strategy that meets the eye, even when you start raking in the gold later on in the game.

The only major criticism I can level at Knights of Pen and Paper 2 is that while it does the basics very well it never really brings anything new to the table. Everything is smooth, polished and works well yet there’s no real unique angle that KYY Games go for. The fact that this is my only criticism should speak loudly, however, as there were few other things I could find major fault with. 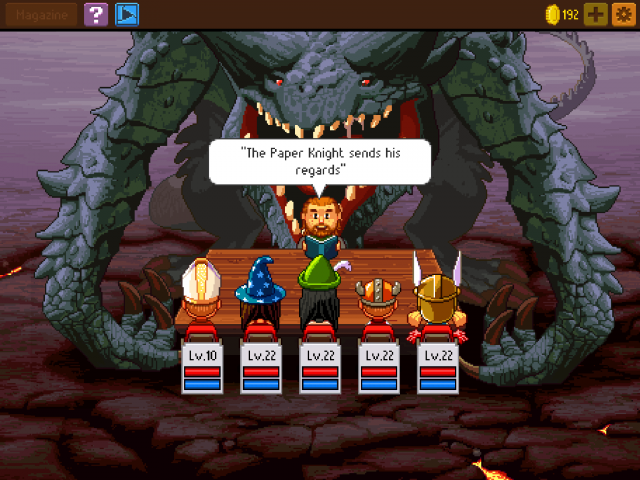 I’m not a huge mobile gamer. My time spent on long journeys or waiting in queues is often lessened with the aid of a podcast or radio show, instead of an app. I’ve tried multiple other mobile games but none managed to draw me into their world and get me to dedicate my precious commute to them. Knights of Pen and Paper 2 has done just that, though. A heady mix of expansive story, engrossing combat and silky gameplay makes it a must for RPG fans looking for adventures on the go.

Knights of Pen and Paper 2 (Reviewed on iOS)

A heady mix of expansive story, engrossing combat and silky gameplay makes Knights of Pen and Paper 2 a must for RPG fans looking for adventures on the go.

Knights of Pen and Paper 2 Review

Knights of Pen and Paper 2 Released on Mobile Devices

From the looks and sounds of it, it's exactly like the first one. And yet AAA developers get complained at for releasing the same game over and over...

Having played 1 and 2, I can say that the graphics are better (2 emulated 16-bit, 1 emulated 8-bit), and while 1 was very free-range, 2's stories are much more fleshed out - whacking off mook after mook became a lot more engaging, especially in dungeon levels. Oh, and the music's x1000 better. Of course, this could just be one of those Marmite games...

Knights of Pen and Paper 2