Lego Batman 3: Beyond Gotham strives to be bigger than its predecessor by bringing Batman and Robin to the far reaches of the DC universe. Along the way they encounter various heroes and villains, with the game opening up to host a range of supporting characters, who join our heroes to do battle against Brainiac and save Earth in the process. Whilst the cast and setting for Lego Batman 3: Beyond Gotham is large, the game never lives up to its galactic proportions, instead sticking by similar formulas seen in previous Lego games making this entry enjoyable but slightly familiar.

The game begins in a similar fashion to that of its predecessor with Batman and Robin chasing Killer Croc through the sewers of Gotham. The first few levels are based entirely in Gotham sewers and the Batcave, you solve simple puzzles, battle a few bosses and are treated to the fine cutscenes demonstrating Travellers Tales’ skill at writing a hilarious dynamic between Batman and Robin. Indeed it is Robin who steals the show, his simple boyhood innocence and slight cowardice is charming, as is his belief in emotions and heroic speeches. This counters the overtly serious Batman who sees emotions as a sign of weakness. In fact the game hosts a fantastic cast of characters with each one being superbly voiced. I regularly found myself laughing during cutscenes and smiling at the different personalities that each character has. A small twist in the story a short way into the game allows character’s attitudes to be changed, resulting in a hilarious crossover between personality and emotions. Other high points include Batman attempting to act as The Joker and Lex Luthor dressed as an unconvincing Wonder Woman. The story may be simple, but it serves the characters well and that is where most of the charm lies. It's a shame that Brainiac isn't as good of a villain as The Joker or Lex Luthor, but his exploits do allow for a lot of the back and forth that takes place between the central cast of characters. 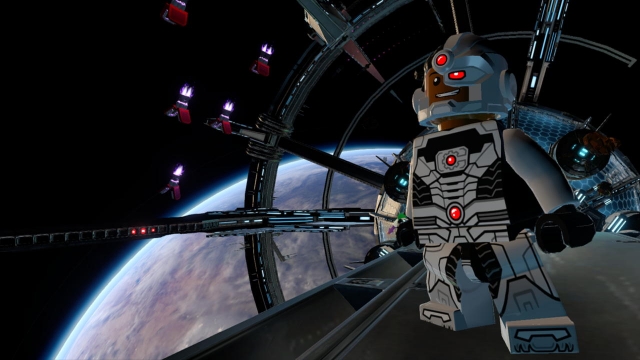 These first few levels allow you to get used to character switching mechanic that will be the key to solving puzzles within the game. A lot of the heroes and villains have different suits to switch between, for instance Cyborg has a Giant Suit which allows him to smash through walls, and (among others) a Stealth Suit which sees him transform into a washing machine to fool any pesky surveillance cameras. The costume switching mechanic has been made easier as well: instead of having to change costumes at a machine like in Lego Batman 2: DC Super Heroes, you can switch them on the spot making the pacing of the game quicker and less frustrating. You will have to use a variety of heroes and villains to get past puzzles and obstacles and it's refreshing to see the missions consisting of a whole host of characters instead of just Batman and Robin. One particular mission sends Batman, Wonder Woman and Superman to miniature sized Earth cities, and this is a real stand out level. Seeing the Eiffel Tower, Buckingham Palace and The Leaning Tower of Pisa in a scaled down size is hilarious and stomping through these cities is very enjoyable. Later missions send you to exciting locations such as The Watchtower and a range of the Lantern planets including Nok, Qward, Zamaron and more. Unfortunately whilst the setting of these planets are strange and exciting, the missions themselves are consistently familiar. You fight enemies, solve puzzles and battle a boss who is in control of the power battery of the Lantern planet. Overall the missions are enjoyable but I do wish Traveller’s Tales mixed them up a bit more. There are occasional attempts at switching up the formula, with space battles and virtual reality hacking mini-games being spread throughout certain missions, unfortunately neither of these are very fun. The space battles look the part acting as a twin stick shooter but your vehicle and the enemies are so small it's difficult to tell what is going on. The virtual reality hacking mini-games fare slightly better tasking you with collecting items throughout a series of maze like platforms where the floor falls away from you. Thankfully there aren't too many of these missions and they don't last too long, allowing you to get back to the main mission relatively quickly.

The game runs and plays relatively smoothly, I encountered a few frame rate issues during a couple of boss fights but nothing too severe. The game is also aesthetically pleasing, the cutscenes demonstrate good character detail and the sheen on the Lego material is a nice effect. It doesn't push graphical boundaries but I never found myself wanting more out of the visuals. The game’s biggest problem is its attempt to shoehorn in celebrity cameos, Adam West is fine due to his inclusion as a collectable and a very awesome retro throwback level, but other attempts feel out of place. Conan O'Brien is the biggest culprit acting as the game’s guide, he starts out as an enjoyable feature but is let down by repeating the same lines over and over again to the point of frustration. Kevin Smith is more bearable and delivers some funny lines but his inclusion still feels a little odd. I understand that he is a huge Batman fan but seeing celebrities scattered throughout the Watchtower makes the environment feel less super. 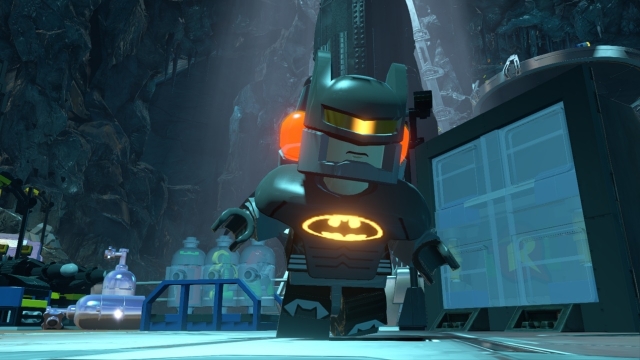 One thing Lego Batman 3: Beyond Gotham excels at is re-playability. This game has a huge amount of collectables to obtain and the end game content is quite fantastic as well, allowing you to revisit the lantern hub worlds but on a much larger scale. I found it exciting to explore these worlds and revelled in collecting characters and gold bricks which are scattered around the environment, obtainable through puzzle solving and races. My major gripe with these worlds is they're introduced too late, I would have liked to explore them whilst I was playing the story to deviate from the main missions. The game’s predecessor did this by allowing you to explore the whole of Gotham City and the game felt more cohesive as a result, this entry limits your access to smaller areas such as The Watchtower, and the Hall of Justice which are fine but are relatively tiny. Saying that, when you do finish the game there is plenty of content to keep you coming back, collecting studs is as addictive as ever and obtaining every minikit in the game is an enjoyable experience as it forces you to explore the levels more and discover hidden areas. Other things such as saving Adam West throughout missions and indeed anywhere you go is delightful and engaging in fetch quests for other heroes and villains is simple but a nice incentive to unlock more content. And you'll want to unlock more content due to the sheer number of characters you can play as, with over 150 heroes and villains to unlock DC fans will be excited to see a range of recognisable faces and many that are not so well known. Unfortunately even with all this content Traveller's Tales has provided day one DLC for customers with more DLC promised. It's a shame because the content looks very enticing with packs such as The Dark Knight, Man of Steel, and even an Arrow pack. It would have been nice for some of this to be included within the game and I feel that many people may be put off from purchasing this content with it being day one DLC.

Lego Batman 3: Beyond Gotham is an enjoyable Lego game let down by the series' own formulaic design. The missions are enjoyable but never allow the game to develop in exciting ways, the restrictive hub worlds are also an issue although the end game content makes up for this. The amount of replay value the game offers is great but it's a shame that it gets introduced so late. The charming and often times hilarious story would be my major recommendation to play through Lego Batman 3: Beyond Gotham. It demonstrates Traveller's Tales’ ability at writing these characters in fun and engaging ways and I wouldn't be opposed to playing through another sequel to experience another back and forth between Batman and Robin.

Lego Batman 3: Beyond Gotham is an enjoyable Lego game let down by the series' own formulaic design. The missions are enjoyable but never allow the game to develop in exciting ways, the restrictive hub worlds are also an issue although the end game content makes up for this. The amount of replay value the game offers is great but it's a shame that it gets introduced so late. The charming and often times hilarious story would be my major recommendation to play through Lego Batman 3: Beyond Gotham. It demonstrates Traveller's Tales’ ability at writing these characters in fun and engaging ways and I wouldn't be opposed to playing through another sequel to experience another back and forth between Batman and Robin.