I actually got into the Life is Strange series because of True Colors. I was there for the Square Enix Presents announcement for the title, and the trailer inspired me to take a look at the other entries to the series. Upon seeing I could pick up all of them for just £10, I grabbed the full collection and within a week and a half had already completed Life is Strange and Before the Storm. I couldn’t get much into Life is Strange 2, primarily because almost all of the plot was propelled by Daniel doing annoying children things irrespective of Sean’s input, which made Sean —and by extension, the player— feel like an unnecessary tag-along in a story that was not their own.

Enter True Colors, the third main entry into the Life is Strange series that brings us once again to a brand new location and introduces us to a cast of new faces, setting True Colors completely apart from the previous entries. Outside of one easter egg and a subtle symbolic nod to the previous protagonists, no mention of the previous stories are made at all, with the only returning character being fan-favourite Steph Gingrich from Before the Storm. Thus, True Colors can be played by someone who’s never touched the franchise before and they won’t get any less of an experience for it. 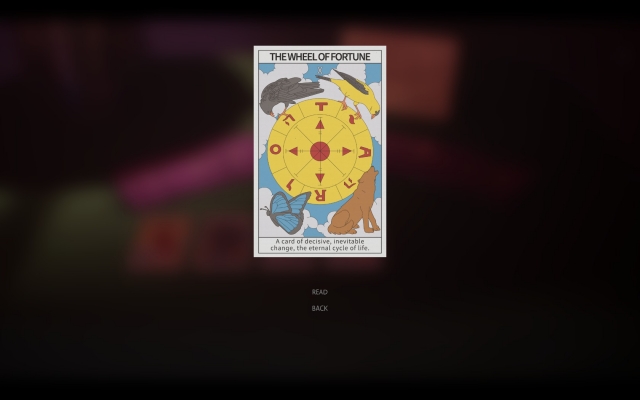 Once upon a time... there were two wolf brothers...

We take the role of Alex Chen, a 21 year old woman who spent her life bouncing around foster homes until finally managing to gain contact with her long-lost older brother Gabe and moving to live with him in the fictional town of Haven Springs in Colorado. Their reunion is cut short when Gabe dies under mysterious circumstances, and it falls to Alex and her friends to figure out what happened using her power, all while Alex tries to find a way to fit into not just Haven, but the entire world.

Returning a bit more to the roots of the series, True Colors puts the power back in the players' hands, literally and otherwise. Alex has the power of reading people’s emotions, to the point where sometimes she will feel what they feel. This sounds less like a superpower and more like just being an empath until you factor in that this also lets her access someone’s memories by interacting with objects that they have a strong emotional connection to and hear what they are thinking in the present moment. With time, she can also change people’s moods, opinions or just completely remove them entirely with ease. These choices often loop back to a common theme for Life is Strange, which boils down to the simple rhetoric of ‘just because you can, doesn’t mean you should’ when it comes to using your powers. There are times where you’re given the choice to use your power, only to end up making things worse for yourself and others in the long run. 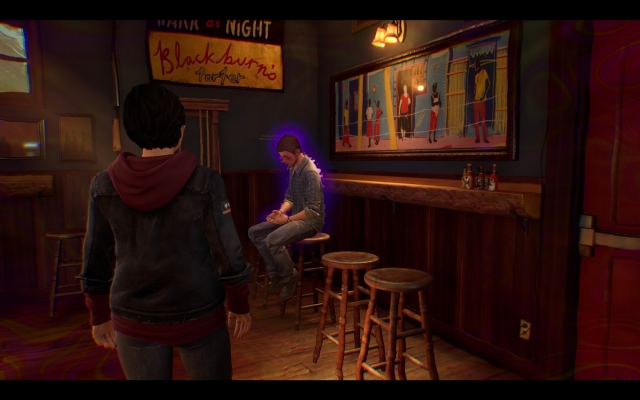 True Colors manages to tip-toe the coming-of-age romance/drama with the darker story beats typical of LiS, and handles the tonal dissonance this creates much better than previous entries have done. The story progresses steadily and doesn’t feature the harsh stop-and-start narrative structure of the previous titles. As True Colors released all five episodes at the same time —as opposed to releasing them separately— the story itself seems to flow more smoothly. LiS was criticised for its jarring tonal inconsistencies between episodes, and LiS 2 features quite major time skips and scenery changes that can make following their journey feel fragmented. True Colors strikes this balance perfectly, with the tension slowly ramping up as more of the plot is uncovered.

Haven Springs is a picturesque town that acts as the set piece for the entire game. It has the same small-town charm that Arcadia Bay radiated, and much like the bay, your actions & decisions will affect the small mining town to offer environmental storytelling in a way akin to how Arcadia Bay would react to Max’s actions in the first game. Help locate a man's lost dog? You’ll see him later on trying to buy treats for her to apologise for losing her. A jogger feeling self-conscious about exercising? Offer her encouragement and you’ll see her on a run the next day. Ignore the stressed-out birdwatcher? Find them in the next episode complaining about the previous day's failures. Many of these choices are purely just for fleshing out Haven Springs, but there are a few instances where choosing whether to help these side characters or not will have a greater impact towards the end of the game. 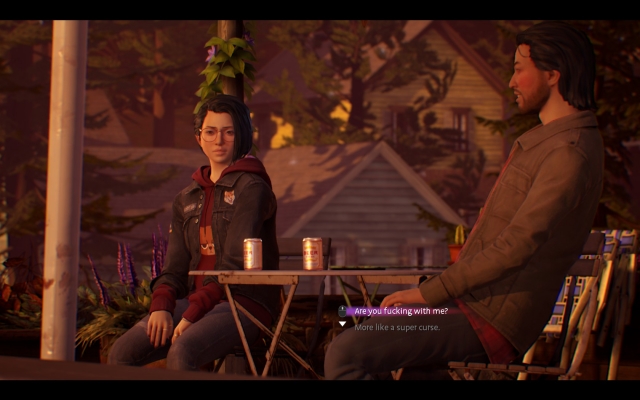 For our review of Life is Strange back in 2015, the writer cited ‘Telltale False Choice syndrome’, and how it can take you out of the moment when you realise that your decisions don’t have any impact. The illusion of choice is a general critique for most branching story games, wherein the choices you make don’t really affect the overall outcome, and that still rings true here. There’s no real way to ‘fail’ at the game based on your choices, and while there are six different core endings (each with their own various branches in correspondence with all the minor choices you made), all of them involve accomplishing your goal. There’s no way (or if there is, it isn’t obvious or even shown in the choice statistics) to make decisions that result in you completely striking out. It makes for a happier conclusion than any other entry has offered, but I was disappointed at the apparent lack of consequence for your decisions. Don’t get me wrong, it’s not as bad as the ‘euthanise your best friend or not’ choice in the first game that then gets immediately re-written by time travel in the exact same scene, and there is an improvement to the way the world reacts to your choices, but I was looking forward to seeing significant change or repercussions thanks to some sub-par decision making that I did that just never came around. 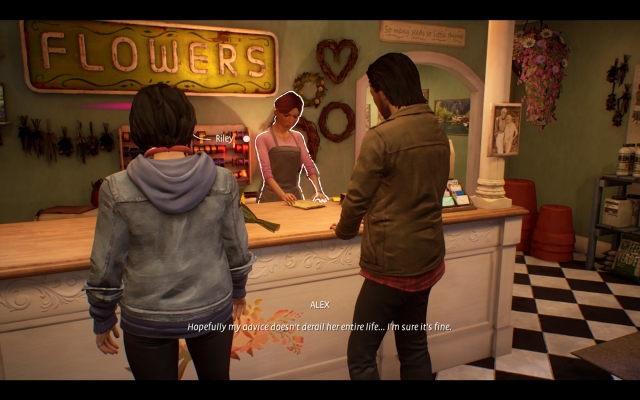 Speaking of decision making, True Colors comes in with romance options in the form of Ryan Lucan, a bird-loving park ranger and son of the local bar owner, and the aforementioned Steph Gingrich, an indie music aficionado and RPG nerd to boot. The game does a good job of letting the player have enough personal moments with both of these characters to decide which one they wish to pursue a relationship further with, if at all. It’s a nice improvement over the mostly inconsequential (if not still touching) romance in Life is Strange 2, and the most laughable love triangle to be ever made in Life is Strange, as the game constantly tries to convince the player that Warren is, in fact, a valid romance option over the girl that you’re literally tearing apart reality for. Both Steph and Ryan have their moments in the spotlight, contributing to the overarching narrative and having their own sub-plots and stories that tie in with Alex’s that make them both feel like equally fulfilling options. Steph has the upper hand, being a pre-established fan-favourite and having interests that the average Life is Strange fan would share, and even though the statistics show that roughly 70% of players ended the game in a romance with Steph, Ryan is still a well-enough established character that having him as a romance option doesn’t feel out of place.

Visually, Life is Strange: True Colors stands out surprisingly well. It’s nothing hardware breaking —nor is it trying to be—, but each location is thoroughly constructed and there is great detail to be found —and rewarded for— in the smallest of things. Animations have seen a massive improvement, with very minor details such as forehead creases and eyebrow twitches being seen on characters appropriately during the game. The lip-syncing is also on point, which isn’t something usually praised but if you played the previous game of the series you’ll understand why it deserves mention. Much like with visuals, the game’s sound design also deserves merit, both in terms of Alex’s power and the sound cues that come with it, as well as the environment as a whole. As a small example, Alex’s guitar actually makes sounds like a normal guitar would, with the hollow knocking sound when being put down and the strings vibrating at the slightest touch. It’s a small detail but one I found really helped towards the bigger goal of making Haven Springs feel like a living, breathing space. Like always with Life is Strange, True Colors knocks the ball right out of the park when it comes to soundtrack. Soft indie-pop rock can be heard in many of the stores and helps set the mood of the idyllic Haven Springs, which paves the way to a darker, electronic ambiance when the tensions begin to ramp up. Featuring a full original album by Angus & Julia Stone, as well as licensed music from acts like Kings of Leon & Gabrielle Aplin, with mxmtoon even offering her singing voice for Alex herself, the musical roster for True Colors is one of the best I’ve seen in a videogame.

Life is Strange: True Colors is a little on the shorter side, clocking in at around 14-15 hours to complete (a single playthrough) which personally put it at a similar length to Before the Storm. The addition of Wavelengths, a four-chapter DLC set to release at the end of September that follows Steph during her time at Haven Springs, may help pad this out for not much extra out of your wallet, but it’s still a lot to ask for a short experience if replaying a game isn’t your thing. Like I mentioned in my review of Psychonauts 2, £50 is something that makes me cry when it comes to pricing videogames, and True Colors also falls under my ire for it. In terms of substance, however, True Colors is a worthy addition to the Life is Strange franchise, maintaining the themes established in previous stories and improving how they tell them. It doesn’t reach the same level of emotional gut-punches that the first managed to elicit, but If you enjoyed other games in the franchise, or want to try out a branching story graphic adventure, you will definitely enjoy your time with True Colors. What True Colors lacks in the emotional gut-wrench that the previous games have, it makes it for with a refined format that presents a story that fits right into the series and tells it in the best way seen so far. You're very unlikely to be disappointed here.