There’s a high chance that the original Lode Runner was released before the majority of our readers were born. In fact, it was released even before I was born, and I’m one of the older members of staff. The Amstrad CPC version, released in 1989, was during my lifetime however, and it is this version that I have fond memories of being frustrated by in the late eighties and early nineties.

Nearly 34 years on from its genesis, the classic title has returned in the form of Lode Runner Legacy: a pseudo-3D re-imagining of the revered retro romp. It’s the second version of the title to come from Tozai Games, the first being an Xbox Live Arcade version released in 2009. The company have also ported the original game to mobiles, so they’re clearly well versed in all things related to it. 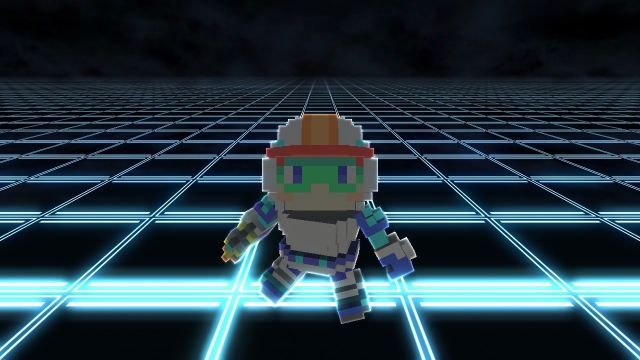 If you’re not familiar with the game, it was one of those that came about in the early day of the platform genre, and is something a little unique even today. It puts you in the shoes of “The Runner”, a little pixellated dude, who has to go collect gold. You have two moves at your disposal with which to do this: walking and digging. You can’t jump, and you have to avoid the nasties that are trying to stop you from fetching the gold. Each level is made up of diggable blocks, so you can avoid them by digging a block out and letting them fall in it, then you can safely walk over their head to get by them, or if you time it right then the bricks will re-appear, squishing the beastie, which will respawn elsewhere, out of your hair for a little while. It’s fairly complex to explain, but delightfully simple to execute.

This new title gives everything a 3D spin, with characters remaining pixellated, but those pixels appearing to be solid, giving a sort of Minecraft-esque look. There’s also a first person view, which, given the fact that the game is played entirely on a two-dimensional plane, allows you to see almost nothing and it’s one of the most pointless additions I’ve seen in a game since Magikarp. 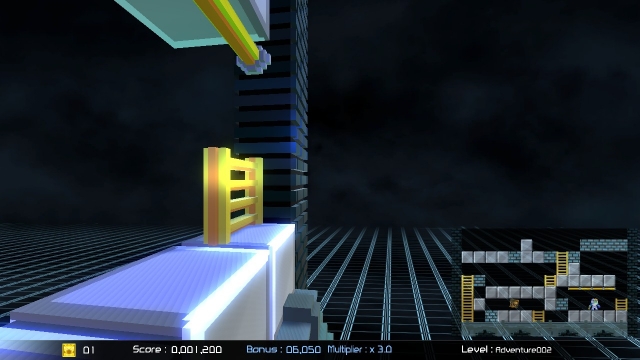 The game features the original 150 levels from the eighties recreated in the new style, as well as 50 brand-new levels. There’s also a level editor, an homage to the fact that the original game was one of the first titles to ever feature such a thing. You certainly get a lot of content, although the original levels go some way to making that quite so large.

If you’re a fan of the series already, you’ll already know what to expect. It’s a challenging game that serves more as a puzzler than what we now think of as a platformer. The levels are short and sweet, with a few modern twists being added such as star ratings and achievements. The game has also been made much more forgiving, with lives no longer being present, meaning that you can keep trying until you either get bored of playing or complete the game. There’s also a level select option, meaning that you can avoid having to start from scratch again every play session. 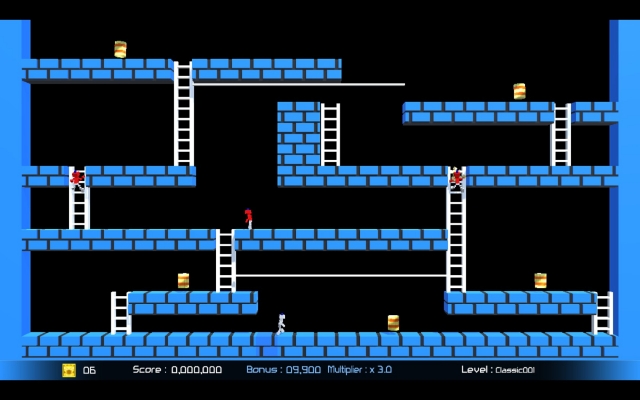 As it doesn’t mess too much with a winning formula, this is a game that plays just as well as it always did. But that failure to fiddle is also where this falls foul. If you’re a big fan of the game, there’s a high chance that you already have a decent version, and if you don’t, then they’re not overly hard to come by. You can pick up copies of the original game on eBay pretty cheaply. You won’t get all the extras this comes with though, and you won’t be supporting an indie developer either. How much you love the game will determine how much you’ll get from the package.

Variable value aside though, this is still a really solid version of Lode Runner. The new modes are generally very good fun, and the classic ones are just as good as always. Objectively speaking, this is a good game and I enjoyed playing it. If you’re reading this review, then you probably don’t already have a copy of Lode Runner, so snap up this one on Steam.

A solid version of a classic, with some nice extras. It’s faithful to the gameplay and it looks the part, but it doesn’t do anything that we haven’t seen before. If you’re not looking for a reinvention, then it’s a good game to play, just don’t expect to be overly surprised by anything.