If you were to recommend a ‘rogue-like adventure RPG strategy card game’ to me - you’ll end that sentence talking to a dust cloud silhouette. I am far from the target audience for Loop Hero, having actively avoided such titles; and yet taking that into consideration, it is incredibly impressive how easy it was to get lost in the loop and spiral into micro-management mania not many games have left such an impression on me.

Four Quarters (developer of Please Don’t Touch Anything) has managed to stack an obscene amount of mechanics in an approachable, aesthetically minimalistic package with Loop Hero. Sealed within is a super combo consisting of a top-down rogue-like deck & dungeon-building auto-battler with resource and settlement management systems shuffled into the mix…how this is remotely comprehensible for the layperson like myself only gives credence to how well the game is presented. 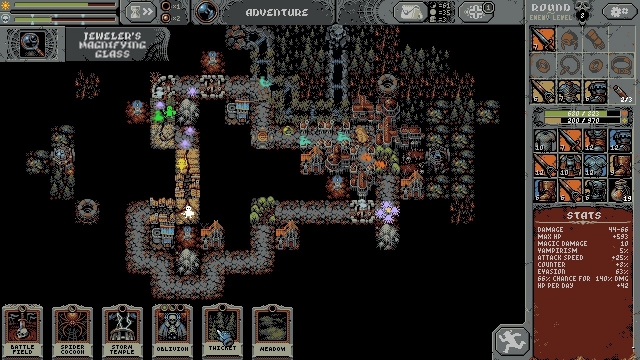 Life has sunken into a world of darkness thanks to the Lich (because a lich gotta do what a lich gotta do I guess); denizens of the land shrouded in a fog of amnesia and duress, turning factions that were once hospitable into hostile. It’s up to our nameless hero (aptly named “Hero”) to loot and execute along the ever-looping route.

Trail traversal is completely automated as Hero plods along the procedurally generated path, narrowing the focus of gameplay to on-the-fly item management and essentially becoming your own worst enemy as a game master. If you want better loot, you got to throw in better enemies - not that the game doesn’t increase in difficulty on every cycle.

And with defeating rivals on the roundabout of hell, the loot you pull can come in two ways (sometimes at the same time!): of weapons & armour, and/or landmark & environment cards. As one can imagine, you can equip weapons, armour, shields, and accessories in the allocated slots available to gain attack and defense boosts, as well as an assortment of buffs and health regeneration stats. You can switch equipment whenever you want outside of dialogue, and hovering over any item (or foe) to compare stats pauses gameplay during combat segments, which is handy!

The cards dropped from annihilating those avenue-bound adversaries will net you some landmark tiles for you to place around the board or alongside the road. Many of which will buff your hero in health points and other resources, and in most cases - actively benefit your enemies too. By creating more of the world around you, you inadvertently produce more foes to battle. Plonk a graveyard on the track and though you may nab some neat commodities (from what I understand, Hero is essentially grave robbing), more and more skeletons will later roam that tile until you return to seek their revenge. 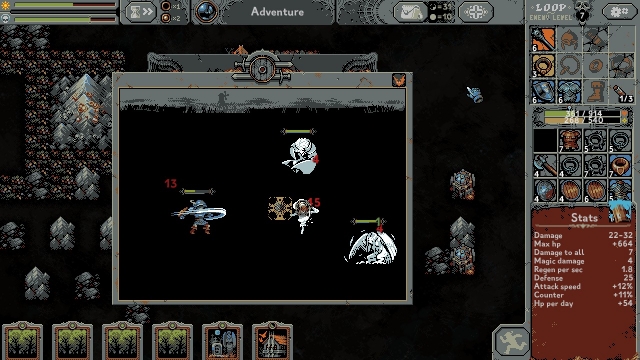 There’s some fun that comes from discovering interesting patterns and quirky intricacies that gift Hero with either HP bonuses, new enemies types, and whole new structures from placing landmarks in specific ways. An early tip is to place any and all meadow tiles next to a stone or mountain block for one extra HP per day cycle - Every little helps!

At any time other than engaging in combat, you may leave the loop to reap and harvest your resources to craft supplies and upgrade your encampment. Though WHEN you should retreat is more important. Retreating anywhere along the loop will lump you with a 40% resource tax, leaving you to scurry away with 60% of what you’ve attained. End up dying and you’ll be revived by your camp-buddies - albeit with 30% of your resources. The only way to get 100% of your supplies is by retreating ON the camp tile or beating the boss of that chapter.

Alongside being able to upgrade your campsite with the materials amassed, our Warrior Hero can unlock two extra classes at his disposal: The Rogue and Necromancer classes. As your default class, a plus to playing as the warrior is that they’ll gradually become stronger the longer a battle goes on. The Rogue adds a trophy element to the base game, where the more trophies you earn from defeating enemies, the greater quantity and quality of rewards that are retrievable at the camp tile (that and you dual-wield weapons!). And lastly, the Necromancer has the ability to summon the undead into battle to fight on behalf of him - don’t want to get those robes dirty now!

Not to discredit the art of the gameplay, but a big draw of Loop Hero for me lies within an odd couple hybrid of Civilisation and Cookie Clicker style games. HEAR ME OUT. Though both couldn’t be further from each other in style, that addictive impulse of wanting “one more turn”, just to micro-manage and watch things in action turns what starts off as a leisurely stroll around the block into a hypnotic cycle of watching the Hero go around and around - completely losing track of time in the process. 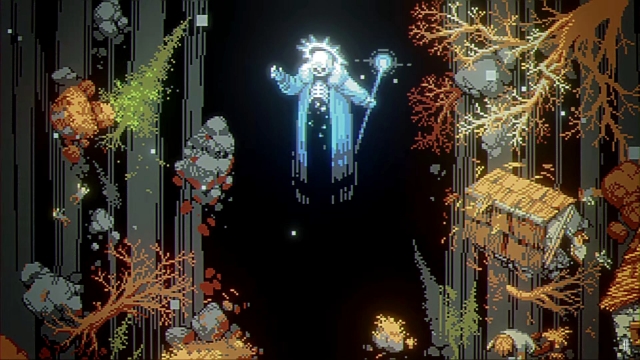 Graphically, the game flows effortlessly between gorgeously detailed pixel art vistas and character busts, cute environment blocks that litter the lane, to the adorably rudimental MS-DOS sprites of the player and enemies on the board. Though I must say, the dusty blue & orange colour palette might not be to everyone's taste, I personally find it as an endearing homage to classic PC games of yore.

The music blends into the overall experience extremely well, pairing well with the retro aesthetic established visually. The bit-crushed and synthesized score have a rustic, subdued charm that I didn’t expect. During typical gameplay, the soundtrack takes a backseat to the other elements at play, somewhat dulling itself as to highlight Loop Hero’s other strengths. But there are moments where the music absolutely slaps - blessing us with the occasional 8-bit 80’s goth flair that, frankly, I would have loved to hear more of.

My time wandering the ouroboros-like path spiraled me into a fit of frenzy, more-so due to accepting my newly awoken appreciation and understanding of the deck & dungeon building strategy genre. I might not be a convert just yet, but Loop Hero certainly has been my gateway.

Regardless of whether or not you enjoy the sound of a “top-down rogue-like deck & dungeon-building auto-battler”, Loop Hero will graciously guide you along its path - only to ensnare you in its devilishly addictive short gameplay loops.