In a time where every game has the pressure to feel like a technical powerhouse with new mechanics and features out the wazoo, there are some games that like to keep it simple and Lovely Planet 2: April Skies is as simple as it gets. From the minimal art style to the minimal controls, everything about Lovely Planet 2: April Skies is simple, cute and just a joyous time all around. I never played any of the games before, but after this, I might just give them a go as well.

Lovely Planet 2: April Skies from indie developer Quicktequila is a first-person shooter platformer with no story or any rhyme or reason to any of it other than it being, well, a lovely time. Since there is no story, the game just begins with a short tutorial with WASD for movement, space for jump and left-click for shoot, that’s it. Afterwards, you’ll be going through the five different sections of the game completing each level within while being graded by three stars for a different part of the game. You’ll get one star for completing the level, one for completing within the time limit and another for not missing a single shot, which is by far the hardest one, but doable. That’s really the gist of the entire game and it’s as simple as it sounds, but I thoroughly enjoyed myself throughout the two to three hours it took to beat. 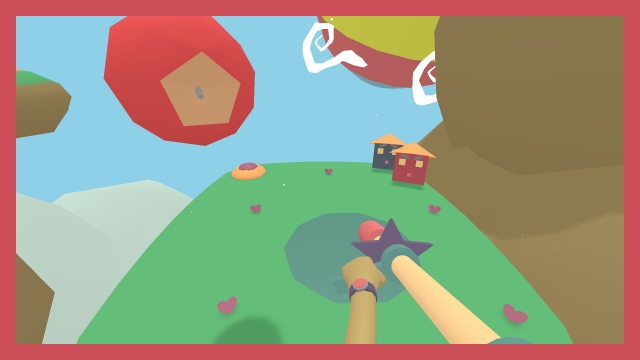 Each new section presented a new challenge to overcome and learn, and as the game went on, it began to combine all these new aspects together making you feel kind of badass when you get all the stars in a level in one shot. An example of these would be the second section adding an apple you have to shoot before it hits the ground, the third adding fog so it’s hard to see, and so on until it becomes quite a bit to take on, but never too much to handle. There is a sixth section as well that are the more challenging levels, but they aren’t required to roll the credits.

Although Lovely Planet 2: April Skies is a first-person shooter, you’re not really using a gun per se, more of a stick with a star at the end that shoots little pink squares. The weapon doesn’t have a crosshair, so at the beginning, it may be a bit of a learning curve to figure out where it is for yourself, but it didn’t take much time at all. You’ll mainly be shooting the red squares within each level who can also shoot at you, but they are quite easy to dodge. There are more things to shoot at – such as the apple mentioned earlier – that are added as you progress as well. If you miss something you’re supposed to shoot, you’ll have to restart the level but restarting happens instantly which was great because it allows you to be in constant motion and want to go for that extra star you missed. There are these dark blue squares as well which are your friends and if you accidentally shoot one of them, it’s an automatic fail. 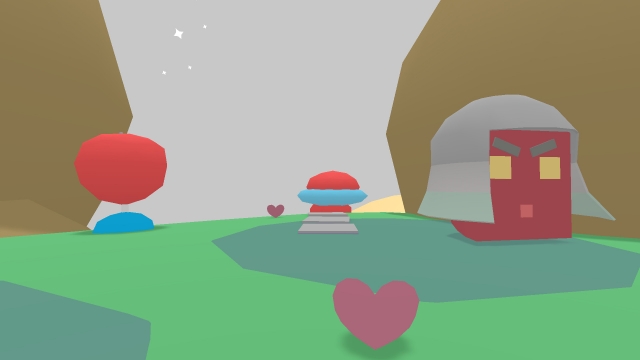 The platforming was surprisingly fun because of its lightweight feel, but because it is first-person, trying to land on some of the smaller platforms while being cautious of red squares shooting at you can get difficult to navigate. The light-weighted feel felt similar to Portal when you have launch somewhere far by jumping down into a portal and getting launched from the other portal. The platforming was at its hardest when the fog came in and when they began to add teleporters because you never know where you’re going to land. You also don’t have to follow the path they have set for you, there are some levels where you can take an alternate path you probably shouldn’t have, but it can give you a quicker time.

Lovely Planet 2: April Skies is all about being cute and its visuals and music can back it up. The menu itself are these huge pastel-coloured bubble letters that already prepare you for the cuteness you’re about to encounter. The entire game is just a pastel-coloured wonderland with a very minimalistic art style that reminds me of a Katamari game or even LocoRoco on the PSP. The music is also happy, feel-good songs that can get stuck in your head for hours depending on how long you’re in the game for or how long you’re stuck in a world. There is just something relaxing about being in this cute world with all the happy music around me that makes it a nice change of pace from all the gore and violence I’ve seen from the past few games I’ve played. 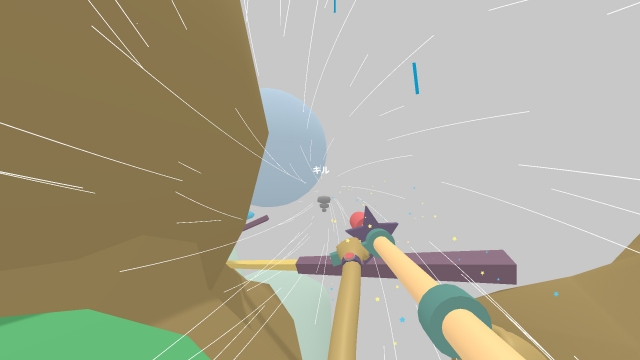 Lovely Planet 2: April Skies is – for lack of a better word – lovely. Everything about it is cute, simple and a nice change of pace from all the overly violent games I’ve been playing recently. It feels great to play and it can get challenging towards the end, but nothing that had me scratching my head or annoyed with difficulty. I loved pastel colours for the visual style and happy inducing music because it puts me in a relaxing place, and for that reason, it’s a game I may return to in the future.

Lovely Planet 2: April Skies is – for lack of a better word – lovely. Everything about it is cute, simple and a nice change of pace from all the overly violent games I’ve been playing recently. It feels great to play and it can get challenging towards the end, but nothing that had me scratching my head or annoyed with difficulty. I loved pastel colours for the visual style and happy inducing music because it puts me in a relaxing place, and for that reason, it’s a game I may return to in the future.