March of the Eagles Review

March of the Eagles is the latest title from Paradox Interactive's in-house developers who, this time out, have taken their grand strategy time machine back to the early 1800s. As a British-based site, there's a certain smug satisfaction that comes from launching a game set during the Napoleonic Wars and finding Français absent from the language selection options. Take that Frenchy!

For those unfamiliar with 19th century history, or not fans of Sean Bean in Sharpe, let us set the scene: Napoleon has just become Emperor of France and in the process upset the majority of Europe. Players take control of a country as the region descends into inevitable war. 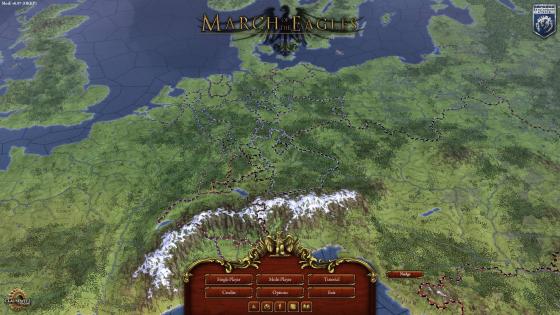 Traditionally grand strategy games have taken a sandbox approach, leaving it up to the player to define the boundaries of "success" and "failure"; March of the Eagles bucks the trend, giving the player one simple goal - total domination of Europe. Thankfully, it's not necessary to control the entire map.

All of the nations are selectable at the start of the game, but it is only the "major" nations that are in a position to win. Each major nation is assigned a number of provinces, requiring control of ten land and ten naval provinces in order to achieve domination and victory. France and Great Britain begin proceedings with land and naval dominance respectively, whilst the other countries start with typically around a quarter of their targets within their own territory.

Upon starting up the game for the very first time, we were instantly reminded of Crusader Kings II, especially with the recent The Republic DLC still fresh in our minds. Obviously, as both games are powered by Paradox's current Clausewitz engine and based in the same region, one would expect the world map to look very similar. As it happens, the map is divided into significantly more provinces than encountered in CKII, albeit without the semi-autonomous feudal lords. 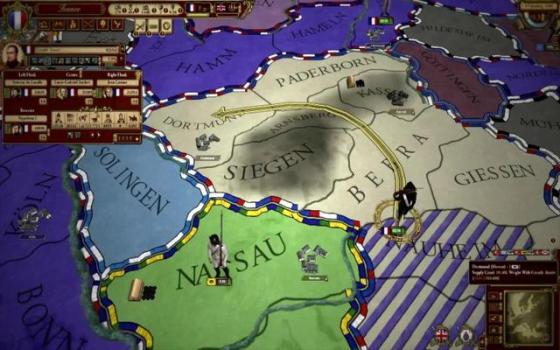 Grand strategy enthusiasts may be a little disappointed to discover that, compared to the majority of Paradox's other titles, MotE is somewhat limited in terms of scale; players are given just 15 years to accomplish their goals. Given that it can take months to march an army across a country, and sieges can last upwards of half a year, this can make the task at hand appear somewhat daunting. Despite this initial fear, it rarely feels that time is getting away from you, even whilst maintaining a sense of urgency. If you wish, it is possible to continue playing after the time limit has expired and a winner has been declared, so any unfulfilled desires of occupying all of Europe can be played out - it just won't count!

Along with the relatively short games, a large number of traditional strategy elements fall by the wayside. Economic management, for example, is largely absent and relegated to basic taxation. Gone also is much of the politics and diplomatic wrangling; various attempts can be made to improve or lessen your favour with other nations but there are no direct alliance options available beyond coalitions.

Throughout the course of the Napoleonic Wars, a number of coalitions were created and disbanded as nations swapped allegiances. March of the Eagles implements the ability to create coalitions against the dominant land or naval power, but only as long as one doesn't already exist. This can frequently lead to large scale military manoeuvres across central Europe, but makes it hard to coordinate allies against smaller countries. Wars involving multiple independent countries against another can lead to interesting tactical decisions: whilst playing as Russia and fighting a war against Persia, we sighted an Ottoman army fighting Persian forces along their other border. Checking the list of provinces required by the Ottomans, the decision was made to divert one of our armies to lay claim to a nearby city to deprive the Ottomans of the chance to hold it, despite our shared aim of defeating Persia.

Combat itself is not just a matter of amassing a larger army than your opponent and attempting to overwhelm them by sheer numbers; however, at times it feels as if a doctorate in 19th century tactics would be required to fully understand what is happening, so it is often best to resort to playing the mathematical advantage.

Units within an army are split across three flanks and a reserve, each of which can be assigned a General with corresponding tactical instructions. Precisely what units should go in those flanks can be a mystery, especially when getting to grips with the game; infantry units are split into four sub-categories (Guards, Line Infantry, Light Infantry and Irregulars), of which there are often multiple of each category available to recruit. The manual and tutorial do little to clarify the differences or make recommendations towards army composition. Once a war reaches its inevitable conclusion - be it victory, stalemate or painful defeat - there comes the little matter of claiming tribute (or offering it if you find yourself in the particularly troubling position of having enemy armies occupying half of your territory). Every victory in battle and captured city adds to your War Score, likewise, defeat subtracts from it; during peace negotiations, this can be used as bargaining power to gain control over occupied cities or to force the enemy to cancel treaties with other nations. Typically, your target cities will require a higher War Score to wrestle from the enemy's hand, so you will often find yourself opening the tribute screen to see whether you've done enough or if you need to grab a few more cities before ceasing hostilities.

If you prefer your opponents of the significantly more fleshy and less computer controlled variety, March of the Eagles supports up to 32 players over the Internet or a LAN. With only eight major nations available, this could potentially lead to arguments over who is left playing the less significant countries; whilst at the same time introducing the opportunity for courting allegiances and double-crossing. One notable addition that we've not seen before is the option for two or more people to play cooperatively as a single nation; how you divide responsibilities in that situation is entirely up to you.

Throughout the interface there are traces of features that have been somewhat abandoned as the Clausewitz engine was streamlined for use in MotE; each nation has a different government type which conveys relevant positive and negative effects, however beyond very rare in game events, there is no option to change government type. The cynical view of this focus on conquest, compared to the dynasty building of Crusader Kings II, could easily interpret Paradox's efforts as an attempt to effectively beta test and fine tune the different aspects in anticipation of the grandest of their grand strategy brands, Europa Universalis (the fourth title being due later this year). The other angle would be the theory that Paradox have opted to specialise in different areas in order to appeal to different players, who might be otherwise put off by the complexity of EU.

Ultimately, March of the Eagles falls a little sort of the heights reached by Crusader Kings II; if you don't own either, we would probably recommend picking up CKII cheap along with an expansion or two. That's not to say MotE isn't worth purchasing, especially if you're more interested in a war-centric experience and fancy a little bit of multiplayer backstabbing.

March of the Eagles (Reviewed on Windows)

March of the Eagles is the latest title from Paradox Interactive's in-house developers who, this time out, have taken their grand strategy time machine back to the early 1800s. As a British-based site, there's a certain smug satisfaction that comes from launching a game set during the Napoleonic Wars and finding Français absent from the language selection options. Take that Frenchy!

March of the Eagles Review

Depends on whether you liked Crusader Kings for its crusading or its cousin marrying... ;)
Reply

March of the Eagles