Taking the massive ensemble cast that is Marvel’s potential Avengers roster and mashing them up into a multiplayer online action game seems like a perfect match on paper, does Marvel’s Avengers reach its potential or is it unworthy to lift Thor’s hammer? In the run-up to release, the messaging surrounding Marvel’s Avengers has been extremely unbalanced, focusing almost entirely on the game’s service-based nature. The game has, after all, been designed as something that will hopefully keep people playing for years. But, by laser-focusing on the game’s ongoing nature, Square Enix have inadvertently failed to shine a light on the game's narrative and character-driven campaign.

This mirrors how playing the game feels, two distinct parts where the games-as-a-service elements bleed over in a way that undermines the campaign a little. So, what does that mean? I’ll try to explain that shortly but let’s start with what Marvel’s Avengers actually is!

At its core, Avengers is an action brawler, à la the old Ultimate Alliance games crossed with Destiny. You’ll visit locations, punch/smash/blast and shoot a lot of robots and other enemies whilst collecting loot and completing an objective. Each Avenger has a different moveset obviously but they all share the same design language. For example, they all have a light, heavy, ranged and intrinsic ability along with a block/parry but there is enough nuance with how their moves play out that they all feel quite different. 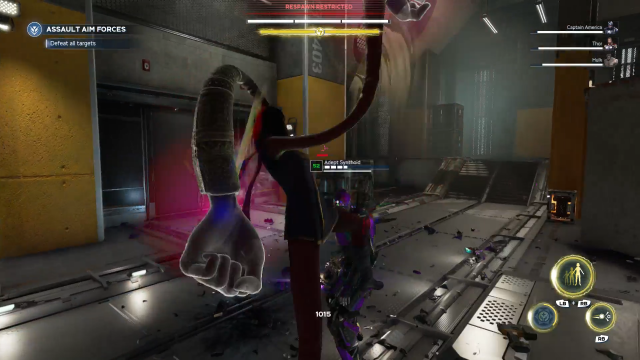 The intrinsic abilities add more flavour to each character, taking the form of a bar that fills in some way or another. Hulk’s Rage powers him up and restores his health for example and charges up whenever he hits things whereas Ms Marvel’s Polymorph acts as both a damage boost and allows her to avoid basic enemy attacks automatically and fills over time. These abilities along with other moves can be improved and tweaked when you level up and spend points in multiple talent trees.

These trees are surprisingly diverse and give you multiple ways of configuring each Avenger. Ms. Marvel is the only character in the initial six to have a direct heal for example, this can be customised to become a group revive or to boost the group’s intrinsic bars. Other characters have different ways of healing, usually involving being in their intrinsic state (Hulk’s Rage, Thor’s Odinforce). This runs true for other things, Hulk is an obvious tank with his Rage reducing damage for example but most characters have ways to increase their defense via specialisation. 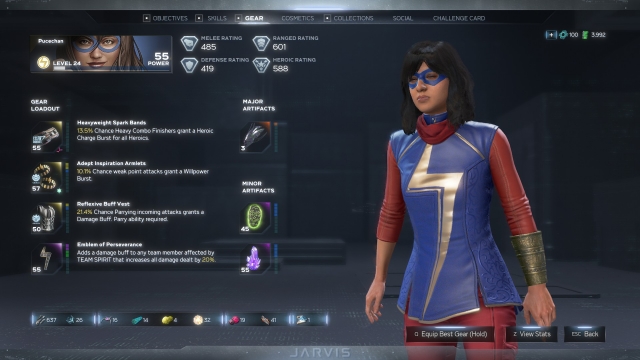 Core combat is a lot of fun; every character feels weighty and powerful. Crystal Dynamics have nailed how it flows and it just works. The fact there are a lot of options thanks to their talent trees along with gear bonuses makes learning them a satisfying experience. From pinning enemies to the wall with Mjölnir to grappling towards an enemy as Black Widow, it all feels great.

The single-player campaign itself is fantastic, starting with Kamala Khan winning a fanfiction contest and earning VIP seats for the Avengers Day celebrations before disaster strikes leaving her changed into an Inhuman and the Avengers themselves blamed for the events that unfold. Cut to five years later and we follow Kamala’s growth from a superfan to a superhero as she attempts to reassemble the Avengers and stop A.I.M’s evil plans to wipe out all Inhumans.

The campaign has a lot of fantastic set pieces throughout its 10-15 hours (as you’d perhaps expect from Crystal Dynamics’ stellar work on the Tomb Raider trilogy) and a lot of fun moments throughout the campaign-specific missions. Kamala makes a lot of sense as a point of view character and her character work and voice acting (provided by Sandra Saad) are superb with the rest of the cast also putting in solid performances. The banter between the whole team is brilliant but Kamala’s rapport with Bruce and Tony is worth the price of admission alone. 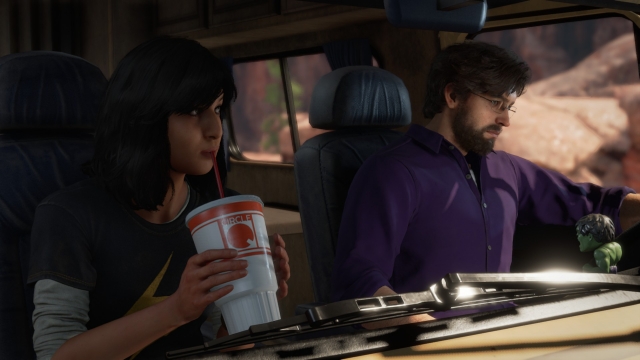 It’s an enjoyable experience and prepares you for what you’ll be doing in the multiplayer quite well without requiring you to engage with it if you just want to play through the story. This is where it starts to feel like the campaign has been compromised a little to fit it into the framework of the games-as-a-service model however. After each mission, you return to a hub from which you can use vendors and interact with characters milling about before using the War Table to select your next mission.

During the campaign, your next story mission is clearly marked with the Avengers logo but you get the opportunity to do some side activities and complete mini-story arcs for each hero that rewards you with an outfit. This acts somewhat as a teaser for the kinds of activities you’ll be doing after you’re done with the campaign but it also disrupts the flow. There isn’t really a reason why the campaign can’t just take you from beat-to-beat without the filler and explanations, it just doesn’t because it wants to teach you how the other half of the game works. The separation between campaign and the multiplayer Avengers Initiative mode is also a little odd as you can jump between them both in-game at any time from the War Table and almost every activity in the multiplayer mode can be played solo. The events and missions you’ll be completing take place on maps you see during the campaign but are mixed up with different enemies and objectives. From defending a group of S.H.I.E.L.D agents to capturing points or defeating waves of enemies, you’ll be seeing the same maps and objectives repeatedly.

This isn’t anything unusual as it’s the same kind of thing you see in games like Destiny 2 and Warframe but here it feels a little more noticeable, probably due to the game having a limited enemy roster right now. This will hopefully improve over time as more elements get added but if you don’t enjoy the grind in this type of game, the limited event types and enemy roster will not be enjoyable. Even with the excellent, satisfying combat

That is the frustrating problem with Marvel’s Avengers right now, the core game is a lot of fun and the campaign is well worth experiencing but the post-campaign/multiplayer feels a little underwhelming, despite it still being enjoyable thanks to the solid combat mechanics. The game has also had its fair share of bugs, for example, loading into a map but it not quite loading properly so I could walk around outside the intended area. But, a lot of these have been acknowledged and will be patched. 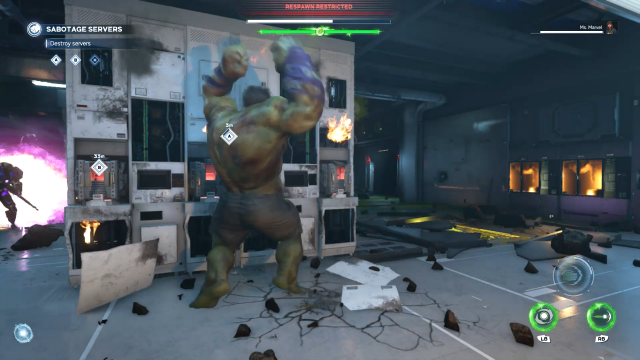 Visually, the game is quite stunning in places with some great area design. The characters having a different visual design and not using their MCU likenesses is initially quite odd but their new looks grow on you. Kamala doesn’t suffer from this for obvious reasons and is a great representation of her comic self!

Despite the AAA levels of polish throughout, there are some subtitling issues. For example, the wrong usage of Affect/Effect in multiple spots and I noticed a character saying “...throw at…” that got subtitled as “...throat...”. These bugs and little niggly issues are relatively minor but they are surprising to see from a developer the size of Crystal Dynamics.

I couldn’t really review this without touching on the microtransactions. Square Enix themselves fuelled the fire here with a blog post detailing the currencies, shop rotations, character passes and cosmetics. As of now, there are four main drops used as “currency” for upgrading your gear with two more (used for upgrading relics and high-end gear respectively) obtained from completing daily faction assignments and missions.

These are broadly fine and are in line with other titles like Destiny 2, although why you need so many is another question. Then you have the generic Units which essentially acts as in-game money. Units are obtained by completing missions and can be used to buy both gear and cosmetic outfits. You finally have Credits which are the paid for currency used to buy premium cosmetics from the Marketplace. 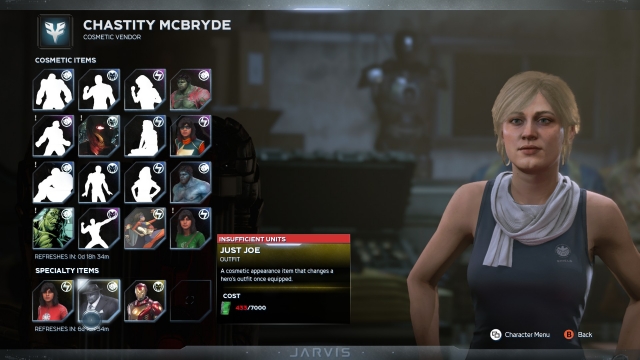 It’s unclear whether the outfits and emotes on sale for Credits will rotate into the in-game vendors for Units. You can earn a limited amount of Credits from the playable roster’s Challenge Cards (which are essentially a battle pass you complete by doing daily and weekly challenges on that character) but only the initial roster of heroes’ Cards are free, subsequent characters, which themselves will be free, will need to be purchased.

As of right now, this setup isn’t as bad as it initially seemed but it has the potential to become quite obnoxious depending on how things evolve going forwards. In many ways, that sums up Marvel’s Avengers, except for the excellent campaign and overall combat, it feels full of potential that we’ll have to wait and see if it reaches through content updates going forward.

An excellent campaign diminished by the intrusion of the game’s multiplayer elements. Some peculiar bugs and sloppy proof-reading can pull you out of the experience but enjoyable combat and an excellent take on some Marvel staples make for an overall fun but grindy core gameplay loop.

The GrinCast Episode 308 - Step Boss What Are You Doing?

I'm not far into it, but I'm enjoying what's there.