On the 20th of November 2007, the original Mass Effect was released. The start of an ambitious trilogy of space opera, third-person shooters that would shake the gaming industry to its core, selling millions of copies and changing how players interact with the story. Fast forward to the 14th of May 2021 and after some missteps like Mass Effect: Andromeda, we now have Mass Effect: Legendary Edition, the potentially definitive way to play the Mass Effect trilogy.

This remaster not only includes all the DLC (except Pinnacle Station for the original Mass Effect but let’s be honest it’s not that big of a loss), but a whole slew of changes to the games that bring them into the modern day. From weapon balancing, gameplay changes and promising that the Mako doesn’t suck, is this the new Paragon of the year or should we all go Renegade and fight for a better future (and a better Mass Effect 5)?

This review will mostly be focusing on the original Mass Effect as it is the game that received the most changes. It will also be coming from a veteran of the franchise. Although I played the trilogy long after Mass Effect 3 was released, I played through the games multiple times. I am also using a gamepad because my aim goes to pot as soon as I touch my mouse. "No cut content is reimplemented and no changes to romance options."

I also want to make clear that these are pure remasters. No cut content is reimplemented and no changes to romance options. You can’t have MaleShep screw Kaiden until Mass Effect 3. But that’s what mods are for and hopefully all those will smoothly transfer over to Legendary Edition.

The first thing of note is that there is a unified character creator, so if you want your Commander Shepard to look the same throughout the trilogy, that is now possible.  Heck, the developer has even made sure the iconic FemShep from Mass Effect 3 is available as default across all games. It's nice to have all customisations options from all games available right from Mass Effect.

Instantly, at the first cutscene, Mass Effect's visual upgrades are apparent. With new textures, lighting and a resolution update, it looks so much like Mass Effect 3 with better lighting. It's such a stark contrast to when I was playing on the Xbox 360 and kinda makes the pre-rendered cutscenes pale in comparison. To newcomers, it will feel like you're playing a current-gen game or maybe a last-generation game. To a veteran of the game, it feels like home. I'm actually a little upset that I couldn't take screenshots in my pre-release version of the game. I already want to set up great shots and show the difference. There are still the awkward pauses from the original though and mouth movements look a little weird to me. Although for mouth movements I might be looking into this a little too much. I only noticed it on human characters after all.

Once I had my boots on the ground, I quickly tested out weapons. First of all, once you equip your guns, the camera is placed close to your back like in Mass Effect 2 & 3 creating a more visceral feel. And after a few quick shots for every weapon type, I can safely say it’s a massive improvement over the original. The sound design is punchier with more weight, making the guns feel more powerful - unlike before where it feels weak, like you're shooting a Nerf gun. It also feels great to be able to aim down sights with all weapons by default. It was hell to play as a Vanguard when you can only aim with a shotgun and a pistol. Going into cover however, while perfectly functional and an improvement over the original, could feel better. Yes, that is a nitpick. This version of Mass Effect has been massively improved from the mindset of it being a pen-and-paper RPG to a third-person shooter with RPG elements.

The AI is still kinda dumb though. Even in the early game, I could see Ashley out in the open taking bullets to the face instead of going into cover, and she wouldn't go into said cover when I told her to.

Also, for a moment can we appreciate how good Mass Effect’s new HUD is? Not only is it more in line with Mass Effect 2 and Mass Effect 3, it’s also so much clearer than the old one, better showing your health and shield as well as your squadmates' status more accurately than before.

And now onto one of the biggest points of contention: the Mako. This hunk of junk was floaty and slow and became a running gag around the fanbase that even made it into the Lair of the Shadow Broker DLC. Even its supposed improvement in Andromeda isn't quite there. The Mako in Legendary Edition? Thank the maker it is so much better! The added weight and handling makes all the difference and the Mako much more fun to drive and the added boosters help too.

Now, moving onto Mass Effect 2 and Mass Effect 3, they weren't bad looking games in the first place, even in this day and age, so they didn't need the biggest touch-ups. Still, the subtle changes are there and make going through the games that much better. I can't really say much more about them. They are already good games, they just needed tweaks here and there in order to create the best versions of Mass Effect 2 and 3.

Now, Mass Effect 3 has the more upsetting change for the community: the exclusion of the multiplayer. The horde mode where you can play different species and classes, which helps with your Galactic Readiness in singleplayer (or your gauge on what type of explosions are made available). It was a cool feature, being able to finally play as anything other than human. I mean, you can actually create a Volus Biotic God and blast away your enemies.

However, I personally don’t mind it being missing. 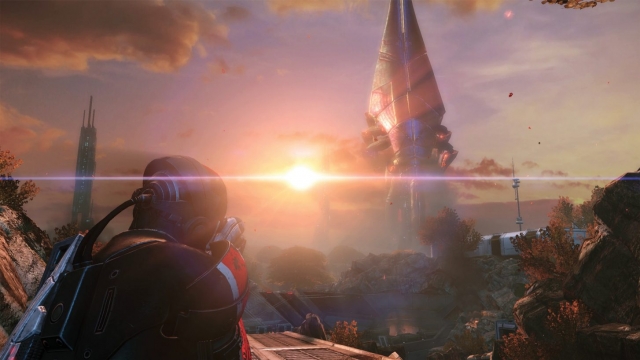 Not everyone had access to multiplayer back in the day and will need to work extra hard throughout the entire trilogy to max out the gauge. Now that Galactic Readiness has been rebalanced, you can easily access all the endings without needing to complete all three games. Still, it does leave a hole in the game however I would rather exclude it than wait another year or two for it to be implemented.

Now, there are more subtle changes throughout the trilogy other than how the game looks. The camera is moved so it may better convey the scene or not shove Mirianda’s ass into your face while she’s pouring her heart out. Yeah, whatever, censorship - dude, if you’re complaining about that you need a subscription to Fornax. Most people won’t even notice these changes unless they have played the original trilogy recently.

My PC is quite good, but the trilogy runs buttery smooth at 60 FPS, which can be further increased to 120. The load times have been drastically reduced across all games. You'll barely wait more than a few seconds, and even the notoriously long elevator rides in Mass Effect can be skipped a few seconds in. It actually feels like an elevator ride rather than a "cleverly" hidden loading screen. I didn’t find any major glitches in my playtime other than jumps between character’s lines and Shepard's shadow being separated from his body during an elevator ride.

Overall, Mass Effect: Legendary Edition is a phenomenal remaster of the original trilogy, with enough changes to not only feel fresh but also has enough quality-of-life improvements to truly call this the definitive way to play the Mass Effect trilogy.

And the Mako, finally, doesn't suck. That is an achievement in it's own right.

Please note, Xbox will allow the transfer of saves between the Xbox One and Xbox Series X. For PlayStation, this is not available and will need to start from scratch.

Mass Effect: Legendary Edition is a phenomenal remaster of the original trilogy, with enough changes to not only feel fresh, but with enough quality-of-life improvements to truly call this the definitive way to play the Mass Effect trilogy.

Taking all of the AAA games 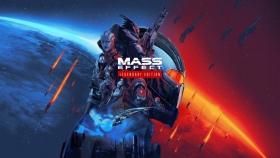