Whenever a retro game falls into my lap for review, the bar is high. Being 28 years old enables me to bask in the glory days of my childhood, where the likes of Super Mario and Donkey Kong Country were all the rage on Super Nintendo. Those are my nostalgic origins of videogames.

My mind kept reverting to those wistful days while playing Mekabolt. It is not a game anywhere near the class of those all-time greats, but its simplicity and easiness certainly are. The retro enthused 2D platform is a throwback to the videogame epoch that enthralled and inspired a generation.

The premise jives with the gameplay: simplicity. I played as a theme park technician who had to collect batteries in each level. These batteries get used on the robots in the theme park, which have gone haywire due to battery loss. There are four sections of the park to navigate, 100 levels in all, 25 per section. That is the extent of explanation on the games theme. 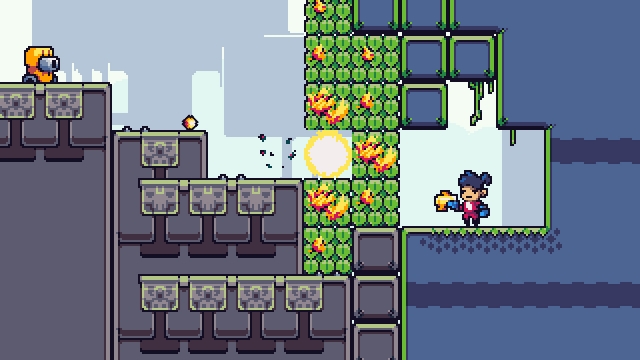 The introductory levels are easy enough that the game is a breeze to grasp. Shooting and jumping are all there is to it, as each level’s goal is to just reach the battery. There are several obstacles that provide a challenge, like sharp spears above and below, blaze cannons, and unhinged robots. Cannons can be temporarily disabled by shooting. Spears must be jumped over and under. The unstable robots can be utilised advantageously by shooting it to freeze it and then reactivate it by jumping on it. In later stages, teleportation becomes possible through shooting specific robots.

Despite its simplicity, there is still much to be pleased with visually. The details of each obstacle and enemy are clear, as each robot has its own appearance and the borders are crisp. Each level has a similar design feel that is operative and efficient. There is no danger lurking that cannot be seen easily on the screen as you move. The SFX were fun and worked well with the theme. It can be a little repetitive hearing the sounds of jumping and shooting since that is all the game entails, but you won’t find yourself playing the game for an eternity to notice. 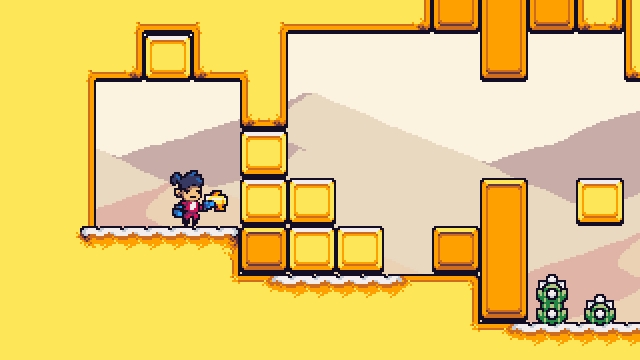 The letdown is certainly at the end of each park section, as there is no pinnacle to climb or showdown to win. I hoped for a more decisive transition from one section to the next, but it never materialized. Perhaps it doesn’t mix with the game and its simplicity. I would have loved to complete a challenge to advance.

For the highly skilled gamer, Mekabolt can be beaten in under an hour. It is a good game to play when taking a quick break from work or when your limited on time. I enjoyed it and would certainly recommend it. It will not blow you away by any means, but it achieves what it sets out to.

This game is simple and easily kills time. There is a charm to the retro, old arcade machine gameplay. In the current landscape of visually stunning, it is nice to go back in time to videogame roots and just play a plain game with basic controls. For a break from the intensity, Mekabolt is a good breather, especially at the value of the low price it is selling for.