As the title suggests, this review is a sort of ‘double-feature’. This is mostly due to my ineptitude and lack of free time (yay, back to school time). As another caveat, I would like to point out that I have not played the first season of Minecraft: Story Mode, so I’ll be talking about the second season from a newcomer’s perspective. Either way, I plan on summing up my experience with both the first and second episodes of the second season of Minecraft: Story Mode in this one piece. Luckily, like all other Telltale titles, Minecraft: Story Mode’s individual episodes aren’t all that long and offer the usual one to three hour completion time. In order to spice up my playthrough, I streamed my time with the game and even had the help of some of my fellow GameGrin writers try out the Crowd Play functionality.

For those not in-the-know about this feature, Crowd Play allows people watching the game to vote on choices throughout the game and decide the direction of the story at key moments. While this feature wasn’t initially intended to be used over streaming services, Mixer has made it fairly manageable and I was able to test the feature out with people across the world. To be honest, the addition of Crowd Play made Minecraft: Story Mode far more interesting and entertaining to play. Before we get into the most important bits, I’d like to mention that this game does look and sound really good. Featuring appropriate songs during calm or tense moments and surprisingly good looking character models that manage to express emotion despite being Minecraft characters. 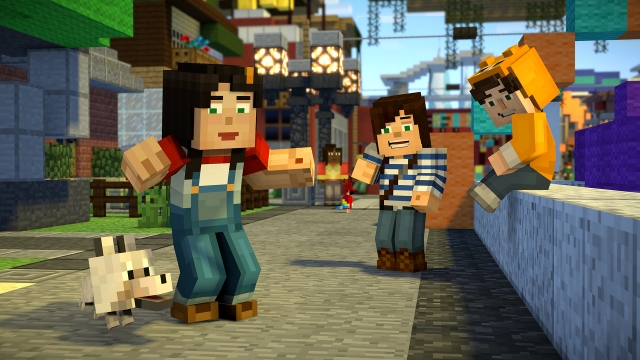 Since this title is based on Minecraft, it does take place in a blocky world and even has mini building sections. These little side objectives may not handle the best, but make for interesting breaks in the otherwise typical Telltale experience. After being given a set number of blocks to work with, the player is told to create whatever they want within a certain construction area. While these sections make for different experiences, they aren’t always the most fun to control or watch. Luckily, the quicktime events that make up the action are fairly responsive and allow the character to perform impressive feats without requiring much skill or even terribly fast reflexes. At this point, I would like to point out that the decisions available in Minecraft: Story Mode seem to be a little more forgiving than other Telltale games.

Now, I could be wrong here, but after watching the ‘consequences’ of my (or my crowd’s) choices, I feel as if several of these simply didn’t matter. Without spoiling anything, I’ll say I was often given choices that seemed to have long lasting effects yet I have only seen real consequences to one choice within my playtime. It’s very possible that I’m not looking for the right thing, but to me, it sees as if Minecraft: Story Mode’s decisions just don’t have the same impact that other Telltale games usually have. On the flip side, I would like to give credit to the variety of dialog choices as many of them seem to have clear and varying results. To be clear, I feel as the larger choices don’t change much while the dialog choices can change the tone of a conversation, but not much beyond that. This isn’t necessarily a bad thing as it means the everyone gets the same experience in the end, but it does limit the uniqueness of each playthrough. 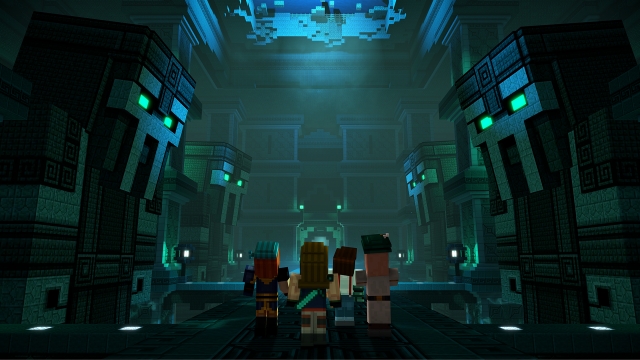 As for the story throughout the two episodes, I would have to say that Minecraft: Story Mode takes a very bite-size approach to the plot of each episode. I am actually kind of lucky to have played both episodes back-to-back, because I was able to see how both episodes began, had an adventure, and then they ended. Sure, they both left off on cliffhangers, but they have to get you invested in the next episode somehow. This sort of self-contained story makes each episode playable without feeling like you’ve missed something or are left in the middle of the action since the action for the next installment has only just begun at the end of the last. The only issue with joining in on a random episode would be missing out on the relationships between various characters and possibly the introduction of the main villain. But to be honest, the characters aren’t that memorable and will probably be passed over like the most of the cast of the last game seem to have been.

Even if I didn’t feel like I got to know any of these characters because they were either way over the top (Radar) or just obnoxious (Stella), I can say I enjoyed playing the game despite not really caring what happens in the story. Don’t get me wrong, the story is engaging enough, but it often feels like a case of ‘unlikely hero’ which we all know will triumph in the end. This always gets to me because it takes away all the impact from any situation that hero ends up in. My whole-hearted suggestion would be to play this game with friends or over Mixer. Either way, make the most of Crowd Play because the addition of a crowd makes the whole game that much more enjoyable.

While not having the exploration of Minecraft, this story-centric title provides an interesting experience that will give any player a few hours of entertainment. The addition of Crowd Play makes the game far more interesting than some other Telltale games.