This should be made perfectly clear: no videogame should suck for 10 minutes straight, especially right at the beginning. 10 minutes is more than enough time for frustration and/or boredom to set in, and at the start of a character action game it’s definitely enough to set a bad impression. If this was a review of the first 10 minutes then it would be absolutely no exaggeration to say that Mitsurugi Kamui Hikae would be getting 0 out of 10.

The game simply limps out of the blocks. It would just be plain mean to pick on the graphics for such an obviously low budget title, but the first stage takes place in a grey circular room surrounded by skyscrapers and inexplicable chasms. It looks like a rejected tech demo for a Dreamcast launch game, and the generic seemingly melody-less rock music in the background that never stops doesn’t help to shake off that feeling. This is all before you start pressing buttons, and when you do the game appears to be a complete write-off. It doesn’t take long to realise that (on the Xbox 360 controller) tapping X then Y over and over again pretty much clears out everything you’re expected to fight. Maybe if girls are watching and you want to show off you’ll tap that left trigger a couple of times to throw in a few dodge rolls, but generally speaking the first handful of stages will make Mitsurugi Kamui Hikae seem like one of the most monotonous button mashers ever made.

Then the first boss happens: and everything changes.

Not that the first boss itself is anything amazing; it’s just a big demon guy who has a really big sword and an even bigger life bar. The classic “X then Y then X then Y again” strategy ceases to work, because this guy doesn’t get instantly stunlocked if you so much as sneeze on him unlike everything else in the game so far. In all likelihood; this dude is going to rock your world about half a dozen times before you start to get anywhere, and the reason for that is because you don’t know how to play the game yet.

This is somewhat reminiscent of 2013’s Metal Gear Rising where you get to the first boss and realise you don’t know the parry move very well yet because all the scrubs you’ve come up against so far didn’t warrant the effort. In that game it was more like a cruel joke; in Mitsurugi Kamui Hikae it’s more like a catch-up class for anyone who didn’t pay attention during the first few stages or bother with the totally optional tutorial mode. The boss itself, although fairly tough in terms of health and damage output, waddles around slowly giving you an entire arena to run around in and figure out how you’re going to approach the fight. This gives you opportunity and incentive to learn the core techniques of the game.

Nevertheless, more inevitable death arrives, but eventually on the game over screen you’ll notice a little “Upgrades” option sitting there. Not only that, but it’s been on the pause menu the entire time too! This seemingly incredibly shallow game was stashing away an upgrades system and border patrol never picked up on it, and from the first few stages you should have a bunch of experience points ready to go to buff up and also learn a few new moves. Combine a juiced up character with practice and extra knowledge of how the game actually works and the first boss should go down pretty easy.

It’s back to business for the next stage, as in you’re trapped in another perfectly circular arena fighting a whole ton of dudes. It should be around this point that the magic happens; the game has completely metamorphosed into a real action game, and a great one. Those new moves that got added to your arsenal have faded “X then Y then X then Y again” out of the gameplay completely. Now performing Y and a forward motion on the analogue stick does a sharp forward thrust, and performing X and a forward motion does this little backflip kick that can juggle enemies into the air. Both are extremely useful, but neither are something you ever want to do accidentally.

It is entirely possible to not purchase any new moves and spend your experience on other things, such as extra health and the like. These things however are buried deep into the upgrade menu to the point where they’re easy to miss completely; they’re the lowest thing on the list other than the unlockable sailor’s outfit. It’s hard to feel that this wasn’t intentional, like the game is saying “Well, they’re there, but why would you want to tank up on health when there’s all this cool stuff to master.” It’s almost like the health upgrades are just there to cater for the weak of heart. You certainly don’t need any of them to beat the game, so in all likelihood you’ll find yourself going for the new moves.

Mitsurugi Kamui Hikae has this wonderful little trick to it that is rare in action games; it almost bullies you into learning how to play it properly. It doesn’t do this by excessive difficulty either. For example tapping Y by itself does a nice little combo that’s good for getting decent damage quickly, but you can’t follow up the Y + Forward Motion move with a Y attack at all. Brainlessly button massing and accidentally doing the forward slash manoeuvre when you don’t want to and continuously mashing the Y button will lock you in place and will definitely get you punched in the face (with a sword).

It’s a subtle touch to the core gameplay makes mindless button mashing a complete non-option, while also forcing the player to learn all the mechanics as fast as possible. It’s really clever and it’s what helps Mitsurugi Kamui Hikae to shine.

“When do I use the hand-to hand combat (X button)?” “When should I use the sword (Y button)?” “Why is it important to make enemies bleed and how can I do it as fast as possible?” “What is the significance of the sword attacks using up the gauge under my life bar and hand-to-hand attacks refilling it?”

These and many more questions will quickly enter your mind and be quickly solved by their (mostly) obvious answers once you start paying proper attention. In the course of another mere 10 minutes, the game has evolved from alternating between mashing two different buttons into a parade of mental micro-calculations and meaty action. Mitsurugi Kamui Hikae instantly turns from rearranging a filing cabinet into reading a novel. For all its cheap aesthetic and bad impressions it made early on, it is still impossible to say anything other than Mitsurugi Kamui Hikae is a success as a piece of interactive entertainment.

Mitsurugi Kamui Hikae doesn’t get everything right; first off it’s pretty stupid that so many of these character action games insist on having a hit counter. It’s just more pointless crap on the screen, although gamers like to defend this sort of thing as “visual feedback” which probably shows the amount of faith most gamers apparently have in their favourite medium. Do people really believe that the best possible “visual feedback” for games based on fighting involving swords/guns/chainsaws etc. is a numerical counter in the corner of the screen? Let’s make this clear, hit counters originated in one-on-one fighting games to actually have a purpose as opposed to just looking cool (they provide relevant information on hit stun deterioration, damage scaling etc.)

Hit counters are especially stupid in Mitsurugi Kamui Hikae because it keeps track of hits even when you’re not in a combo; even wailing on guys you’ve already killed will add to it and only getting hit by something will interrupt it. There is kind of a purpose to this as there’s this “Zeal” mechanic where your attack power goes up if you get high combos without taking damage, but there’s already a confusing visual presentation for that in another corner so there still doesn’t need to be a dedicated hit counter on the screen.

If that last little tangent seemed a bit nitpicky then here’s some justification for bringing it up: it’s really dumb that the upgrade system is tucked away in the pause menu. There’s already some questionable design choices going on in the sense that certain key moves (Mitsurugi Kamui Hikae has a counter and a parry manoeuvre, both of which have to be purchased first) are locked away entirely and not just upgradeable, but making the only method of receiving them hidden away in a menu that you have to pause the game to scroll to is really stupid.  This is what’s infuriating about the hit counter, which as well as looking ugly is only there out of peer pressure, taking up space on the screen. If you must fill the screen with numbers as least keep a permanent account of experience points and perhaps a shortcut (the Back button would work well, see The Last Of Us) to the system that you based the entire game around!

It’s not a game-annihilating issue or anything, but as stated above Mitsurugi Kamui Hikae is a continuous rope. Levels are cut into five “waves” with absolutely no break between them, boss fights barely get an introduction, cutscenes are always seconds in length and having to retry puts you back to the start of the fight you just lost. All the fluff was cut out to provide a delicious, meaty and cheap 1-2 hour action experience and, in this reviewer’s opinion, designing the upgrades in a way that actively encourages the player to pause the game to utilise them is a disappointing oversight.

Mitsurugi Kamui Hikae’s obvious cheapness does let it down slightly, but the limitations that come from that made the creators focus on having meaty action, and for the most, part that is exactly what it delivers. A few bits of polish, tweaks and slightly shorter boss fights and it could have been an amazing little action game designed around the idea of combat rooms. As it stands it’s just kind of great, but at its budget price “great” is good enough.

Hater of everything you love, also wears a hoodie at all times to hide how fat he truly is.

Hi Lesmo. You know, you made all those comparisons, but I find it VERY surprising that you didn't mention at all that game tries to imitate Devil May Cry in sooooo many ways. 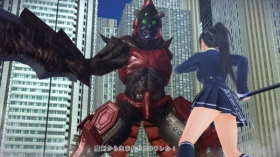