Monolith is a top down bullet hell with your standard roguelite game featuring randomly generated dungeons and levels with hand-crafted looking rooms. Having disliked Binding of Isaac for its gameplay pace, Monolith manages to convince that not all randomly-generated content is terrible.

Bullet hells are a one-and-done basic principle of either repeating patterns and learning them, or understanding how each enemy operates. Monolith goes for the second route in somewhat tight rooms. With the very zoomed and small rooms that are part of the overall dungeon/level, it straddles a fine line of being claustrophobic and being fish in a barrel. Somehow landing in between, there are rooms which border too cramped, and yet, manages to stick the landing thereabouts with the restrictive playspace. But does this fit the bullet hell status quo of bullets? Not by a long shot, even with a bullet to play space comparison. But the boss fights are good fun, if you don’t repeat the same one over and over and over again... 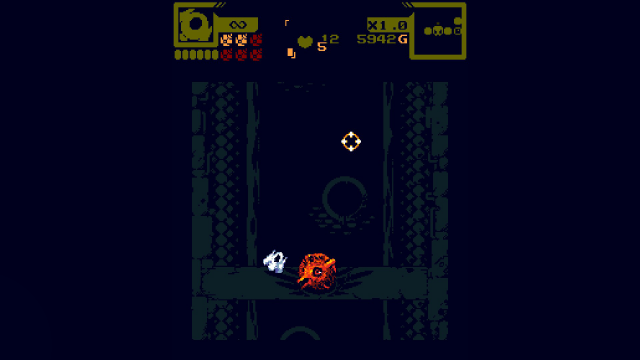 A nice challenge, but nothing I couldn't beat [gloats at half health]

Lacking the pixel hitbox, the chunky ship you embody can do a dash/roll like move to avoid fire. I-frames couldn’t be discerned if you avoid taking damage, unless you have the teleport upgrade. Compared to the enemies and the life system, this game doesn’t hit the ballpark of an expected bullet hell. Lacking the finesse and sheer absurdity, it passes itself as a lesser game in that genre. Its slight saving grace is that the game has the now somewhat set in stone attributes of a expected Rogue-lite game with overall progression. In this regard, it’s somewhat reminiscent of Enter the Gungeon.

Mechanically, it’s somewhat basic. Power ups and upgrades feel incremental and somewhat lacklustre in some regards. Overall pacing is okay, doing just fine. But like many complaints within the “rogue genre”, your runs are somewhat luck-dependent based on encounters, some being tougher than others, combined with the weapons. It’s somewhat of a struggle to recommend this game despite its lack of inherent flaws. Visually it’s got a strong pre-GBA SP aesthetic reminding me a weird side scrolling asteroid shooter with its yester-gen cartridge. The menu is slightly better than basic, allowing you change how it looks to certain degrees. Runs are somewhat short, much like Isaac. But as a whole, it’s alright. It does what it needs to and does it with a solid attempt. Nothing here really screams innovation, but then if you’re a fan of this type of game, this will be a solid entry in your list of rogue-lite games.

Scoring any lower would be a bit far for what the game offers and does. It’s like baked beans on toasts: nice and filling, but you wouldn’t call it a proper meal. If you’re into your “Rogue type” games, looking for something short, snappy and quick. This is a game for you. Personally, this just isn’t my cup of tea with what it does.

Go into Video Options: Enable Hitbox. Yeah, the hitbox is only a few pixels in size. It's just that enemy shots are very large.